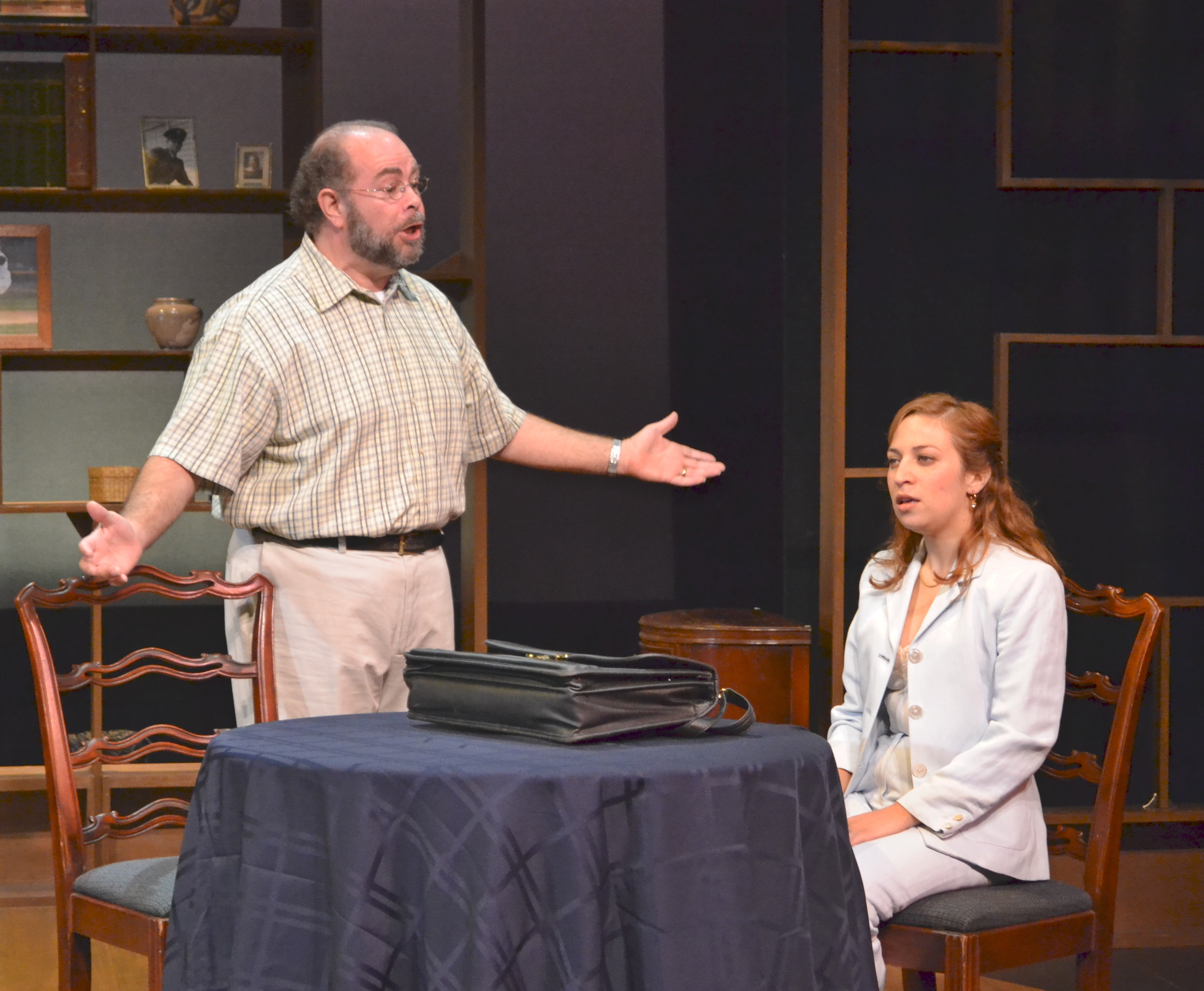 You’ve no idea of the country we almost made for you. The fact that I now think it’s all a crock now does not take away from what we almost achieved.
—Recovering ‘60s activist to her daughter in Lanford Wilson’s Fifth of July

The loss of innocence, especially the recognition of human frailty and compromise, is the saddest aspect of maturing from adolescence into young adulthood.

And the sobering aspect of moving into middle age is realizing that smug observation isn’t about “other people;” it’s now about you.

Finally, the grace note of growing older is learning to forgive yourself for it and those you love, even if it’s just a rationalization.

These are unspoken truths lying just below the surface of Amy Herzog’s intriguing play about betrayals in a radical family in Millennial America, After the Revolution.

The Caldwell Theatre Company’s season opener is a smooth, polished production ably led by director Margaret M. Ledford and performed by a persuasive cast that features Jackie Rivera and Gordon McConnell as daughter and father.

The asterisk is that while the evening is intellectually stimulating enough to jumpstart discussions in the car going home, the emotional anguish is constantly undercut by Herzog’s frequent injection of comic moments and witty repartee. You may only feel moved a handful of times.

Herzog creates the Joseph family of Boston, three generations of self-professed Marxists whose recently-deceased patriarch Joe became a liberal icon for refusing to name names during the McCarthy era.

Everyone in the family remains left-leaning, especially Joe’s son Ben (McConnell) an outspoken high school teacher and union leader. But the torch has been passed to 26-year-old granddaughter Emma (Rivera) who unreservedly lives the family ideals. She heads a committee seeking justice for a condemned Black Panther railroaded in a racist trial for killing a policeman. True believer Emma has made the government’s persecution of her grandfather’s outspoken political activities as a touchstone for her fund-raising and the emblem of her young life’s mission.

Most of the family has gathered today to celebrate Emma’s incendiary valediction at her graduation from a prestigious law school. But her uncle Leo (the warm and wonderful Michael H. Small) tells Ben that a family skeleton about Joe is about to tumble out in a book. Although virtually everyone else knows of the political transgression, Ben has never told Emma despite two decades of spinning tales about her grandfather’s courage and the revolution just around the corner.

Oddly, this pivotal moment of familial devastation doesn’t land in this production. When Ben admits Joe’s sin, Emma seems somewhat stunned. But the seismic enormity of the revelation, how it obliterates the ground under her feet, how it constitutes a terrible betrayal of her trust in her father and family, that just doesn’t come across with the power essential to make Emma’s actions credible as she struggles for the rest of the play with her grandfather’s legacy, her family’s cover-up and her own upended belief system.

After the Revolution explores the less romantic realities of social activism such as the cost of unwavering devotion to a cause. But this isn’t a political play wrapped in a family saga. It’s a look at family dynamics wrapped in the milieu of leftist politics. It’s less a story about why people betray their convictions under pressure and more about why people betray the people they love. Even closer to its core, Herzog wants to show how we learn to get past the betrayals or be warped by them.

Herzog depicts a hyper-articulate, super-intelligent family whose tunnel vision cripples their ability to see each other’s arguments. Emma hurts too much to process Ben’s explanation of the extenuating circumstances of Joe’s actions and his own. Ben feels too guilty to appreciate the primacy of his betrayal at keeping the secret.

Joe’s widow Vera (Harriet Oser) lambastes her granddaughter’s inflexibility over her grandfather’s  lapse. “That’s a lesson and we move on,” she analyzes correctly, but oblivious to her own rationalization.

But like her, something of the heart is missing from the production. In the penultimate scene in which father and daughter try to understand each other, the ideas come across, but you’re not moved watching them clumsily strafe and circle and reach out to reestablish a connection. That may be because Herzog cannot resist breaking up the tension with laugh lines.

The most affecting moment occurs earlier when Emma has virtually cut off contact with her family. Her gentle stepmother Mel (Nancy Barnett in a welcome return to the boards) calls to try to reopen communication.

Mel quietly shares how Joe’s judgmental family during the 1980s refused to acknowledge Mel’s sole act of civil disobedience. The reason: The cause that Mel no longer recalls was one that Joe did not approve of. Worse, Ben did not stick up for her.

But Mel is blessed with a forgiveness that few in the family ever show. She tells Emma that while this slight was terribly hurtful, she eventually came to understand and pardon the family’s shortcomings. Beautifully underplayed, Barnett imbues the scene and the entire play with its sole touch of compassion for human weakness.

Credit Ledford for her guidance: No one outside the rehearsal room knows what she does to achieve this, but she gets personal bests out of many of the actors she works with.

For instance, Emma is a breakout performance for Rivera, a New World School of the Arts grad best known for playing troubled teens. She is absolutely convincing as a young woman committed to a cause down to her DNA.  She initially exudes a self-assuredness that wilts under the doubt that  infects the foundation of her beliefs.

Looking a little like an intense Debbie Wasserman Schultz, Rivera has a malleable mouth as quick with a grin as a frown. But it’s her eyes that work overtime expressing joy one moment and accusation the next. Perhaps she needed a little more ferocity, but that might just be the alchemy of a particular opening night.

McConnell gives another natural, convincing performance as a man facing consequences he had fooled himself into thinking might never come. He’s not afraid to portray Ben’s self-deception as well as his ache over having lost the affection of his daughter.

But Ledford brings out the best in everyone including Arturo Fernandez as Emma’s patient lover and Tiffany-Leigh Moskow as Emma’s ne’er-do-well sister just out of rehab.

Notably, Howard Elfman, trapped for years in one-dimensional roles, recently has had the opportunity to exhibit a range that was always there. But with Ledford, his performance rises yet another level just in his two scenes as a generous donor to Emma’s cause.

He beams a modest sincerity in one of the genuinely touching moments in the show – his short speech about how much he admired Joe Joseph’s defiance because he doubted he could have done the same, and how he needs to do now what he can to make up for what he should have done then.

As the grandmother, Harriet Oser reminds us how cheated we are not to see her doing more work. Aided by Herzog’s most multi-faceted characterization, Oser and Ledford paint an elderly doyenne whose hearing is fading, but whose steely loyalty to the memory and myth of her late husband is unnerving. Vera is both admirable in her wise observations about the need to understand the pressures Joe was under and flawed in her inability to acknowledge even a shade of gray in Joe’s duplicity. Oser nails them both and makes you believe both can live in the same woman.

Audiences might yearn for a little more outrage and angst among the Josephs, but Herzog, Ledford and company teach a life lesson about the tragedy of putting politics and pride before people. 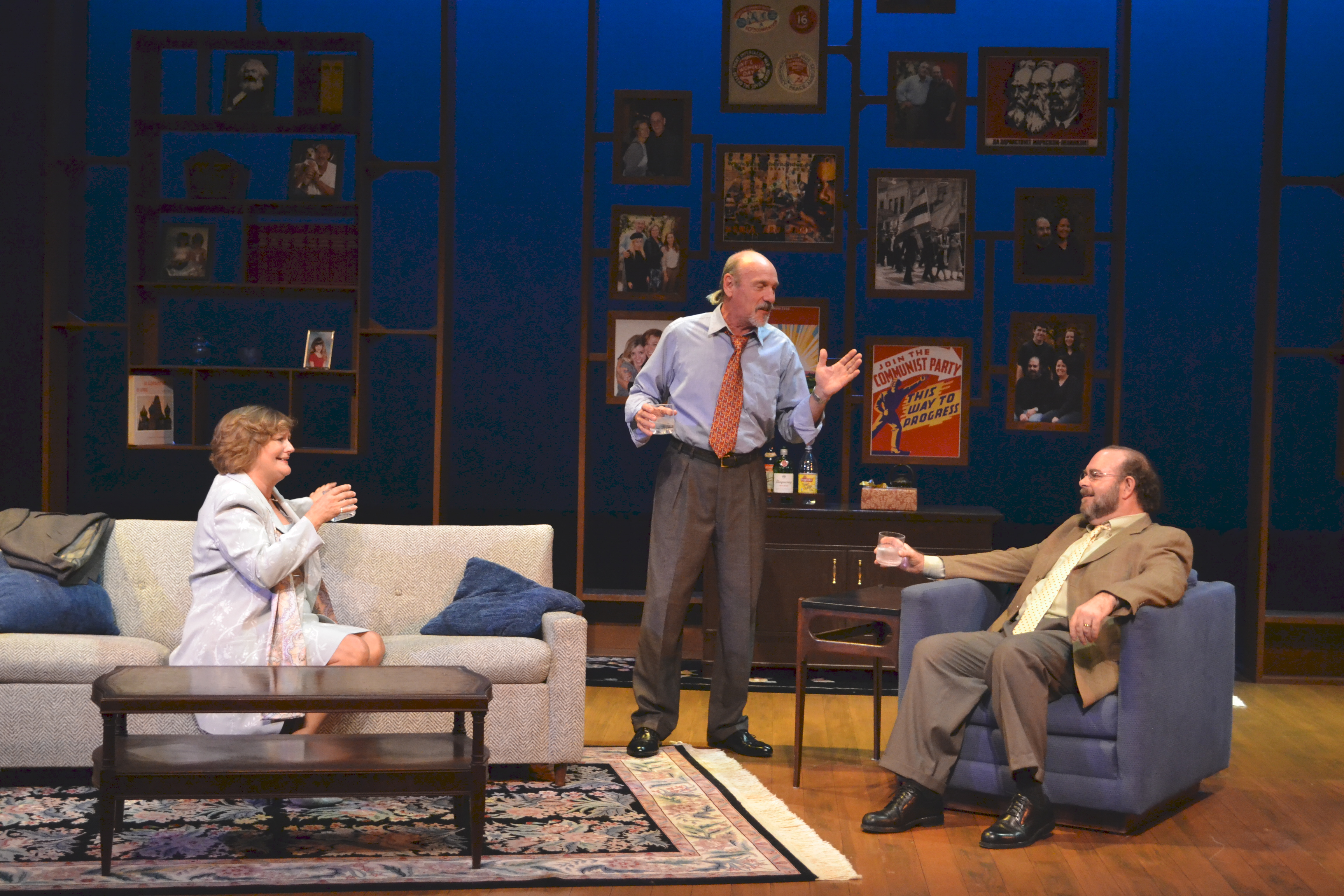