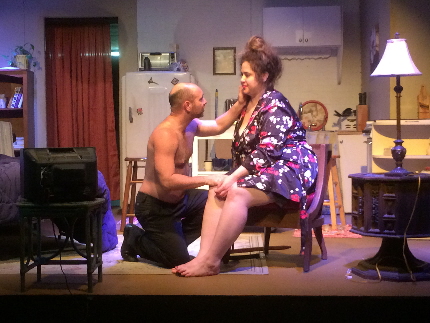 The herky-jerky pas de deux of romance between two wounded souls in Frankie and Johnny in the Clair de Lune is such an engaging tango because these emotionally clumsy dancers so echo our own failure-frought fears that it’s impossible not to root for them to end up together.

Seeing them naked is hardly the most exposure about them as playwright Terrence McNally and the Alliance Theatre company gingerly strip them of their secrets and defenses.

The facts that the entire courtship occurs and resolves overnight after torrid lovemaking and that these are quirky, spiky protagonists lends a wry bit of a fairy tale underpinning to this improbable romance between a voluble short-order cook and a seemingly tough cookie of a waitress in a drab one-room apartment in Hell’s Kitchen, New York.

But director Adalberto Acevedo and cast members Casey Dressler and Andy Quiroga pull it off in an intimate coupling of emotions as well as bodies.

It starts in a half-light as we hear loud panting of sex under the covers of a sofa bed while lovely “Clair de Lune” plays on a radio. When heads pop up over the comforter, the man starts to laugh heartily for almost a minute, first puzzling the woman, but eventually seducing her into joining in with him – a metaphor for the whole play.

McNally’s 1987 script – replete with period references – charts how Johnny suddenly realizes that his suddenly blossoming feelings for Frankie should be acted upon by both them – a full-fledged no-asterisks love affair. Frankie, who has been burned by life and love too often, is beyond gun shy. While she is intrigued and even flattered, there is no way she is going to jump into a serious relationship after one hook up, let alone pledge her undying love.

So until the dawn, Johnny pursues her. In the chase, both reveal painful baggage. McNally’s point is that the risk is worthwhile. Johnny – not unlike Cervantes orating a few miles further north at The Wick in Boca – is bravely pursuing his dream even though he is fully aware that potential tragedy is not an academic abstraction.

Another masterstroke is making these heroes as recognizable people no matter how quirky they are. Johnny may quote Shakespeare for fun, but these are very much hard-working blue-collar people familiar with blue language and crushing disappointments in life.

Quiroga has the acting challenge of spending most of the show in a single-note pursuit mode. Fortunately, he is so good at pacing with the help of Acevedo that you never feel bored and Johnny amazingly doesn’t seem off-puttingly relentless.

Quiroga has always been a favorite of ours, from his damned denizen in No Exit to his angry brother in A Man Puts On a Play. He doesn’t get caught acting, he doesn’t even inhabit a role, he just is the role. Johnny isn’t needy; he is filled with the joy of the possibility of love. He’s been around; he knows disappointment. But he’s like a born again Christian almost physically yearning to share the discovery that there may be hope yet. When he says aphorisms like “People are given a moment to connect…. We have to connect or we die,” it’s Quiroga’s earnestness and desperate urgency that make you buy such ragingly romantic utterances.

Dressler has the opposite challenge: She has to change emotional gears and McNally doesn’t give Frankie a lot of time or specific impetus to do that at a particular time in the script. Dressler does a decent job at making the changes plausible, but it’s the weakest part of her strong performance. Dressler otherwise produces a strong, intelligent even admirable creation. Dressler exudes some quality that makes Johnny’s fascination with her completely believable; something worthy of that pursuit stirs under Dressler’s characterization. She’s also good at dryly shutting him down after a particularly outrageous declaration of romance.

Dressler is a plus-size woman. This is not unusual; Most women cast in the role over the years pointedly did not have Sports Illustrated model bodies. First, it makes her more real and relatable as a stand-in for all of us; second, it overlays a welcome complexity to Johnny’s offer since some less developed sentiments in the audience will appreciate just how chary Frankie is to turn away this opportunity. In any case, kudos to Dressler’s courage for not shying away and to her maturity for not making a big deal about it.

The narrative arc is a very intimate but straight-ahead pursuit with some circling for variety. So Acedevo has succeeded in keeping it from being boring while keeping the scale naturalistic without falsely operatic outbursts.

Frankie and Johnny was the breakthrough play for McNally in an off-Broadway success in 1987 with Kathy Bates and, first, F. Murray Abraham, and, later, Kenneth Welsh. It was made into a mediocre movie with Al Pacino (well-cast) and Michelle Pfieffer (totally wrong). It has only been done rarely in South Florida, most notably in 2003 by GableStage with Avi Hoffman and Laura Turnbull.

For all the frank sex talk – and it can be blunt if authentic – McNally has a romantic’s flair as well. Johnny says something about wanting to cover Frankie every day in a million roses. Frankie says quietly, with sincerity and poignant rue, “I don’t need a million roses, I just need one.”

Alliance has undergone previous transformations in mission, scope and venues, and now has done so again. It has dropped the word “Lab” from its name, moved its performances to Barry University’s Pelican Theatre in Miami Shores and refocused its mission on building a repertory company for contemporary plays rather than developing new work of local playwrights.