Posted on September 8, 2012 by Bill Hirschman 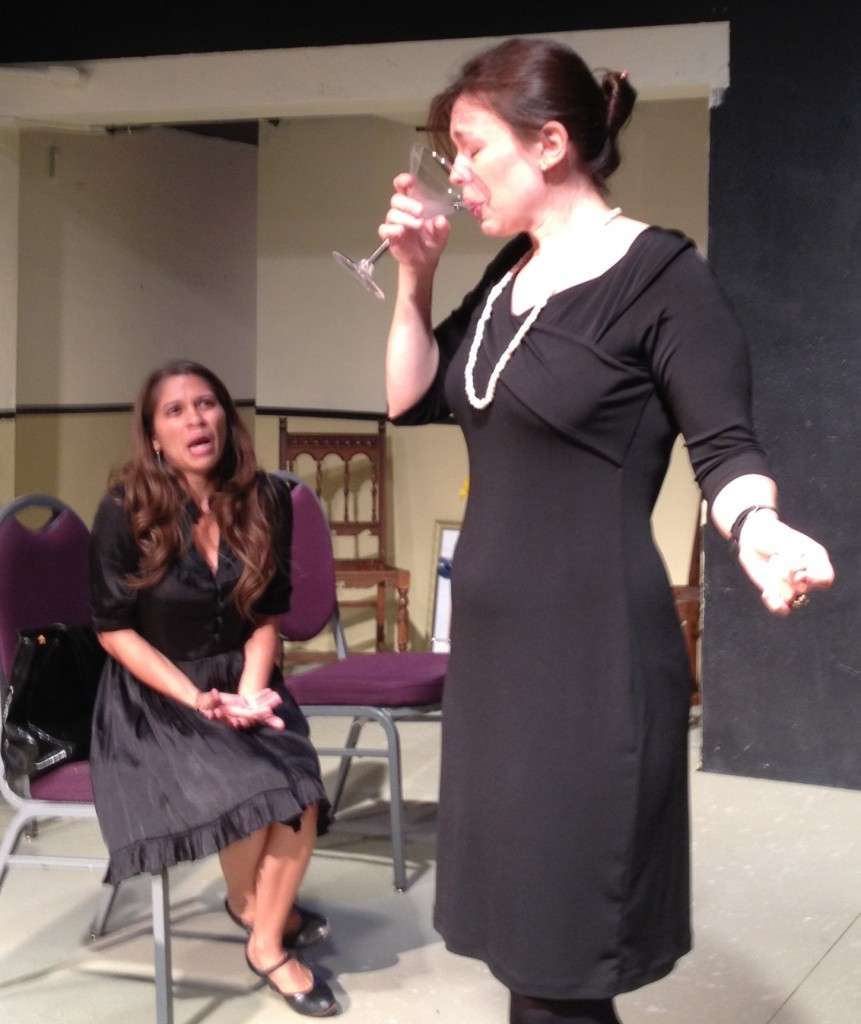 Here’s as varied a crop of images as you can imagine: High school students glued to their Ipods and Gameboys attend the viewing of their teacher’s dead mother – for extra credit. A fictional hero finds himself in a funeral home with his dead lover rather than in her bed as he hoped – and berates the author for the plot development. A woman tosses candies across the viewing room into the open casket of her father.

Sort of a theatrical stunt, the playwrights were given four weeks to write a first draft while meeting a few requisite parameters:
* The play had to be about 10 minutes long.
* The play had to be set in the viewing room of the same funeral home.
* All the characters had to be in their late teens or early 20s.
* Somewhere there had to be the line of dialogue: “Why did it have to be that book?”
* And somehow a toothbrush had to be incorporated into the proceedings.

Silliness and a quite a bit of sloppiness always accompanies these projects; it’s part of the fun, much like the 24-Hour Theater Project, just with more time to polish. As always, some work is better than others, some a lot better than others. It’s more a goofball exercise of imagination than serious playwriting or acting.

The project is a continuation of Alliance’s commitment to produce only new works of local playwrights this season. In this case, the authors include Marjorie O’Neill-Butler, Tony Finstrom, Christopher Demos-Brown, Alexandria Iona, Mariah Reed and Andie Arthur. Alliance core members Mark Della Ventura and David Michael Sirois served triple duty by contributing playlets, directing all the pieces and acting in several.

Almost every piece needs work and the success/stumble quotient is often determined by the variable strengths of the repertory troupe of young actors.  Several scripts meander plotwise as if the playwrights are trying to fill their 10 minutes, but their diverse and imaginative approaches to the assignment make the evening entertaining. A few playwrights, seeing that they needed some kind of button, toss in a little O. Henry twist at the end.

Easily the best piece overall is Demos-Brown’s Protagonista. A sexy Latin/Italian lover (Rayner Garranchan) is in a spotlight narrating a steamy passage from a soft porn romance novel. Suddenly, this manifestation of the author’s imagination drops the accent and yells at the novelist in the back of the auditorium (Sirois). The lover is upset at the author’s desire to make the tales more literary, thereby robbing the hero of his amorous exploits. As the two spar over who’s driving this bus, the tone is witty and inventive. The dialogue and construction have an assured, polished craftsmanship that several of the other entries lacked.

Equally diverting was Finstrom’s Venom & Vodka set at the viewing for a despised theater critic (what a stretch).  The event is attended solely by a not-especially-grieving widow armed with drinks (the delightfully arch and acerbic Anne Chamberlain) and an unemployed actress (Natasha Waisfeld) who was not only panned by the critic in her Bitch on a Bus on a Cellphone , but was also his mistress. The wife, in pure Addison De Witt/Elaine Stritch mode, is relieved: she thought the critic would cheat on her with a young boy. Finstrom has penned terrific zingers and Chamberlain tosses them off with stylish verve. Waisfeld, who had the title role in New Theatre’s Edith Can Shoot Things and Hit Them, is not as compelling. Among other things, her voice trails off or drops in register at the end of sentences, robbing them of any punch.

Sirois’ Catapult Confection posits a woman (Iona in an acting role) talking about her mixed emotions about her father’s death while she and her friend (Sirois) toss candies into the open casket like street kids cutting dimes. They are joined by a friend, the son of the funeral home owner (Della Ventura) whose blasé attitude toward dead bodies is obviously a bit different. The script itself is just okay. But as with other Sirois/Della Ventura ventures as playwrights, directors, actors and long-time friends, this one pays off in a hysterically funny bit as each one cavorts silently behind the woman’s back each time she turns to face the other. It’s a carefully choreographed ballet of physical comedy that reflect the pair’s tightly meshing skill sets.

Della Ventura’s Mr. Ross’ Loss, the one about the students seeking extra credit, was another adequate script, but it was helped immeasurably by the droll portrayals of incipient slackers by the actors. Chamberlain is unnerved by her environs, so she remains buried in the tunes of her earbuds, singing her reactions to the ongoing conversations as if she is singing along to lyrics on her Ipod. Waisfeld and Garranchan are an affectionate if  bickering couple. Breeza Zeller is a delightful cartoon of a Valley Girl more concerned with her makeup than the tragedy.

*Arthur’s Performance Review in which an angel from the Apocalypse Readiness Division (Jovon Jacobs) gives the Angel of Death (Stephanie Meskauskas) an evaluation prior to commencing the end of the world. It’s an intriguing premise, but the performances are too amateurish to do justice to the script.
* Reed’s Grave Matters in which a nerdy young man (Della Ventura) enlists the help of a wannabe vampire (Iona) to make him undead, over the objections of his supportive friend (Chamberlain). In this case, it was the chemistry of actors with winning personalities that made the piece work at all.
* Iona’s It’s Not That Serious in which two friends (Waisfeld and Zeller) argue about the rationale that their deceased friend may have used to justify her suicide.
* O’Neill-Butler’s Scavenger Hunt in which a man (Della Ventura) turns the titular game into a romantic evening for his intended (Zeller) – at the funeral of his mother.

Perhaps the most enjoyable facet of the evening is seeing how the playwrights work that book line and the toothbrush into every scenario. In most cases, the humor lay in how they were dropped in as dopey non sequiturs.

Oddly enough, the production succeeds less as an exhibition of playwriting chops than as a showcase for the stronger actors – Sirois, Della Ventura, Garranchan and especially the chameleonic Chamberlain.