Amparo Immersion Theater Is More Effective Than you Expect 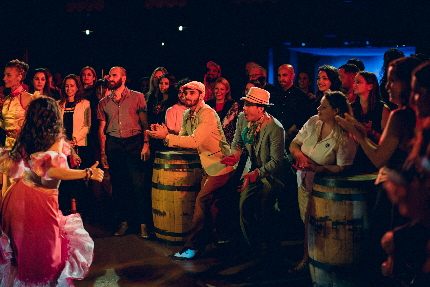 Here’s one of the most startling moments in recent South Florida theater.

In the immersive Amparo, a rifle-toting actress playing one of Castro’s minions fiercely, frighteningly gets directly in the face of the 2019 patrons at a re-creation of a 1959 New Year’s Eve party when the Communists took over Cuba.

On opening press night, the character said something quietly threatening to an older man in the crowd. He stared into her eyes and said in a voice of forged steel with barely banked anger, “I’m not afraid of you.”

The Venezuelan émigré, of course, knew he was attending a theatrical production. But something clicked for a split second, something more than resonance or recognition. The illusion was gone. He was back home. He was saying something he either had said or wished he said or wishes he was saying now.

Thus, the evening alternatively titled The Amparo Experience is precisely named. The strength of this tale of love and loss familiar to Cuban-Americans is that the production plunges you inside the action so you experience what it was like rather than watching it or reading about it.

Those moments are the hallmark of playwright Vanessa Garcia and director Victoria Collado’s creation — a surprisingly effective experience, even for people who are not fans of immersive theater.

The story traces the Castro regime nationalizing (stealing) the Havana Club rum empire from the Arechabala family, the ensuing Cuban diaspora and the family joining forces with the Bacardis to revive the “real” Havana Club rum recipe in the United States in defiance of the Cuban government.

The theme of immigration echoes loudly in our country in which most people are the descendants of immigrants. Amparo, the name of the storyteller, is Spanish for “shelter.” At the end of the epic, the senior Amparo says to the audience, “The story is now in your hands. What will you do with it?”

Not every section lands as well as the aforementioned confrontation during the 90 minutes as patrons are led from room to room through an old downtown Miami mansion. But there is a driving power throughout and several more stunningly effective moments that reaffirm the tragedy and triumph for some and introduce it viscerally for others.

At one point, barking soldiers at the airport split men and women into single lines and then confine them in adjacent rooms. Crucially, the characters and the paying patrons are mixed together. The helpless men can hear the women (including their spouses and dates) being viciously harassed and verbally abused. One actress endures a strip search. It is terrifying, especially if you are Jewish and flash to being on the life-or-death lines at Auschwitz.

Through much of this narrative journey, the creative team succeeds in bonding and involving a group of strangers into a whole willing to sing along with many of the period songs woven through the evening.

Late in the play, as the families are emigrating by sea with the sound of waves lapping over a barely lit room, the characters persuade the entire audience to join hands or put their hands on the shoulders of their neighbors. As performers sing period songs of hope and regret, the entire assemblage silently sways in unison as if aboard ship. It has not erased the fourth wall; it has disintegrated all the walls.

Akin but slightly different than some other immersive theater pieces, patrons enjoy an hour of free and imaginative cocktails and then break up into five assigned groups headed by a secondary character. The story in three groups is communicated allegedly in “90 percent English” and the other two bilingually.

The groups go through different paths and different mini-scenes called “heartbeats,” then join up for “spinal cord” scenes. For instance of the latter, there is the welcoming 1957 New Year’s Eve party in which patrons dancing to a live band witness the first meeting of the central lovers, Amparo and Ramon. Then, a few heartbeat scenes later, the audience is together as the 1959 party is invaded by a bearded cigar-smoking guy in fatigues and his cohorts. Heartbeats you may or may not see include packing belongings in a panic while rehearsing cover stories and a firing squad.

This is presumably an expensive undertaking: 23 actors, evocative costuming, a live band, four dancers, a well-stocked bar with bottle juggling bartenders, the transformation of this former party house into rooms and rooms of period milieus, a phalanx of theater techs, security guards and guides.

To truly enjoy it, customers have to commit as completely as the cast. Keeping a 21st Century cynic’s distance will deprive you of much of the pleasure. This is not sit back “entertain-me” theater. But the rewards are considerable.

Garcia, who wrote Cuban Spring for the late New Theatre in 2014, has effectively constructed a complex structure in a collaborative process with Collado and the design team. It is a polished premiere of a concept tried out in Miami and  New York City in earlier incarnations. There are a lot of incidents and ideas to cover, so some dialogue and events are not especially subtle. In “cute meet” scene, Ramon says he will see Amparo  “next time.” Amparo asks coyly, “Will there be a next time?” He replies, “There’s always a next time; there’s always a future.” We saw Godfather II; we know what will happen in the next New Year’s Eve scene.

There’s a lot of exposition and one-sentence didactic pronouncements, but perhaps they can be forgiven as part of the style.

What Garcia and Collado triumph at are theatrically stylistic scenes in which individuals call out cherished memories of Cuba with a sensory specificity that will resound for those who lived there and will create the environment with a crystal focus for those who have never been on the soil.

The nature of the piece does have one serious inherent drawback. While the entire audience is simultaneously present during “spinal cord” scenes, they only get to experience parts of the rest of the story. So while the theater artists are aware of all the pieces as a whole, the audience only sees pieces told in their share of “heartbeats.” No customer is privy to the entire saga.

Further, many ideas, concepts, even fleeting plot points are yelled out by actors in the middle of scenes of chaos. Many are lost in the cacophony. Some make no sense lacking even a second sentence of context. In an aftershow talkback opening night, a panel of the creative team cited moments that some audience members had not registered during the performance.

The acting is presentational, not naturalistic. But it is the most effective aspect of the production because what the audience is immersed in is not so much the sets, costumes, soundscape, or lighting. It is the passion of these performances that you are immersed in. No actor is going to be competing for a Carbonell, but their total commitment – including while interacting with unpredictable patrons – is unfailing.

The cast includes Cubans, exiles, first and second-generation Cuban-Americans, theater and telenovela actors. Among the standouts are Bertha Leal as the title character; René Granado as Ramon, the stalwart head of the family at the time of the revolution; Susana Pérez as the present day Amparo and the story’s narrator; and Natalie Cabo as that soldier who seems ready to slam her rifle butt in your face. Other notables include Roberto Escobar as the older version of Ramon and Yesler de la Cruz as a majordomo. But most of the entire cast delves deep into the fleshed out stories written for them.

High praise is due to Collado who has deftly molded this enterprise and led a team of designers whose attention to detail is impressive, including choreographer/assistant director Samantha Pazos; musical director Jose Elias; scenic designer Joe Rawda; costumes Jorge Noa and Pedro Balmaseda; lighting, Tyler Frank; sound, Abigail Bailey, and production stage manager Amy London who must coordinate a half-dozen parades at once.

Some may wonder if this is really public relations for primary underwriter Bacardi along with the Broadway Factor producers, which include two journalists that this critic worked with at the Sun-Sentinel. Bacardi has been embroiled in an international cultural, marketing and legal battle for years with the Cuban government and its French partner which still produce “a” Havana Club rum around the world. But that aspect of the story is only one scene and told with narrative integrity to illustrate how the older Ramon ensured his family’s legacy would survive.  It is all legitimate theater.

(Note: If you are mobility challenged, notify the box office. Staffers are on hand to make sure you can sit while everyone else stands and to use an elevator when others use the stairs. Some parking is available in a lot directly east of the mansion.)

To read a feature about the making of the show, click here.

This entry was posted in Performances, Reviews and tagged Amparo, The Amparo Experience, Vanessa Garcia, Victoria Collado. Bookmark the permalink.