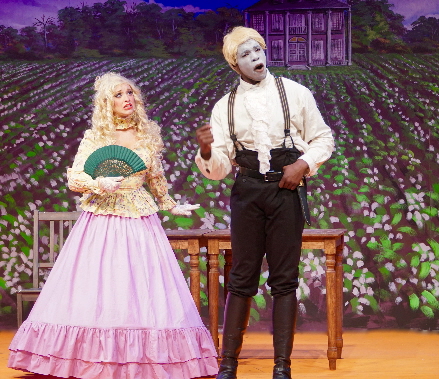 An Octoroon is the kind of art that defies a Siskel & Ebert thumbs up / thumbs down assessment. You can praise or fault elements of the script or a production, but Area Stage Company’s courageous effort reinforces An Octoroon’s overarching intent as a thought provocateur.

It’s impossible to be neutral about its premise and execution, which is what Area Stage and playwright Branden Jacobs-Jenkins desire. The best art stimulates a reaction — not necessarily the same specific reaction, but any reaction. Any other creation is simply venting for self-gratification.

There are jaw-dropping moments in An Octoroon – one in particular – that will stun some, anger others, stimulate mulling hours afterward, promote some to ask why do this play at all. Some will find it brilliant and enthralling, some hateful and boring. What it is guaranteed to do is make the audience uncomfortable. It’s been a long time since a South Florida audience saw a work so certain to accomplish that goal.

Just a taste: The leading black actor claiming to be Jacob-Jenkins swathes his visage in whiteface to play a snarling Southern plantation overseer as well as a Caucasian sophisticated dandy. A middle-aged Jewish white man paints his face bright red to portray an American Indian only capable of pidgin English. Another Anglo covers his face in tar-colored makeup to play a lovable “little pickaninny” one minute and an elderly Uncle Remus the next, both steeped in the breathtakingly insulting stereotypes of a minstrel show. And believe it, that’s only the beginning.

Most notably, the play is drenched in the blithe, almost unconscious use of the n-word.

An Octoroon is a Brechtian play within a play within a play that won the 2014 OBIE Award for Best New American Play. The lead character is known as BJJ, a black playwright. He wants to present an actual 19th Century potboiler called The Octoroon (not An Octoroon) by the real-life Dion Boucicault. But he tells the audience that his plan was endangered when all his white actors quit. So BJJ starts to daub his face in white makeup, initially leaving his lips and dark areas around the eyes peeking out uncovered to remind us of the truth beneath the artifice.

The over-the-top melodrama tells of the virtuous Zoe (the luminous Amanda Tavarez) with “one-eighth black blood.” She has lived as a white woman on her “uncle’s” Louisiana plantation. The property is on the verge of being sold to an overseer. Zoe is bound to be sold along with it since, as someone with mixed blood, she is considered property.

But to further issues of identity, justice and labels, Jacobs-Jenkins takes everything into a stylistic, surreal dimension. BJJ portrays George, a genial relative who falls in love with Zoe and wants to save her and the plantation. Gil Kaufman plays a drunken actor who is assigned the roles of the Indian, a white auctioneer (while still wearing the red paint) and the spirit of Boucicault. Seth Crawford’s enunciation is mush-mouthed as he ludicrously tries to approximate the patois of plantation slaves, but he throws himself fearlessly into those portrayals. Mallory Newbrough, who has scored several times in the past year in musicals, delightfully flutters her way as the Scarlett O’Hara belle who sets her chapeau for George.

Other major inhabitants include the slaves Dido, Grace and Minnie (Stephon Duncan, Daryl Patrice Fortson and Candice Marie Singleton) whose frank backroom banter give a clear-eyed balance to the lyric flights of overheated dialogue that the white folks indulge in. During the play, the women’s attitudes and language become ever more contemporary until the last scene when they sound like any resident of the 21st Century.

Just to gild the atmospheric lily, the narrative is interrupted occasionally for no apparent reason by the vision of a scampering 7-foot Br’er Rabbit (Kenya Anthony-Moore).

Boucicault meant this as an anti-slavery tragedy like Uncle Tom’s Cabin. (Zoe says she cannot expect better treatment because the mixed blood makes her “an unclean thing.”)

Indeed, Jacob-Jenkins’ play is an extended inquiry into, among many things, whether race is a genuine, artificial, profound, overblown, essential or secondary way of defining ourselves, the people we deal with and the way we deal with each other. Just start with the intentionally ludicrous conceit that makeup makes an audience forget the race of an actor.

The funhouse mirror that Jacob-Jenkins holds up for us is discomfiting and unforgiving, especially his use of language in this time of renewed awareness of racial discord.

George, recently returned from living abroad, speaks with a bonhomie borne out of the certainty of his racial superiority. He proclaims with paternalistic pride, “Ha ha ha. How I enjoy the folksy ways of the (n-word) down here. All the ones I’ve ever known were either filthy ape-like Africans of Paris or the flashy uppity darkies of New York. Here, though, the Negro race is so quaint and vibrant and colorful – much like the landscape. And so full of wisdom and cheer and tall tales.” Reread this knowing that it is delivered by a black actor wearing white face.

The problem is that while this play provides a jumping off point for extensive post-show discussions and interpretations, Jacob-Jenkins makes his thematic points relatively early and then doesn’t really come up with much else during the expanse of a 2-½ hour play. The result is the sense that this goes on too long. Additionally, although the deliberate pacing of the melodrama is correct for the period, it’s too stately for a 21st Century ADD-addled audience. Still, a production by the esteemed Wilma Theatre that we saw last year in Philadelphia seemed painfully far longer and narratively opaque.

Among several factors that make Area Stage’s production far better is director John Rodaz. The co-founder of company stages the entire production with insight, wit and theatrical imagination such as how he gets the stage strewn with cotton early on. He has also worked very hard with the cast to make the storyline clear.

This is a very tough play to act, requiring the cast play the “You must pay the rent” dialogue with total commitment. But the troupe unassailably succeeds with Rodaz’s guidance. They have not shied away from the over-the-top stilted declamatory style of the melodrama and they never wink at the audience as if to say how they know how artificial it is. They resist standing outside the play to acknowledge the satire and social commentary that Jacobs-Jenkins pours out over the footlights.

Top honors go to Robert Richards Jr. as BJJ whose innate charm and committed performance provide the central fulcrum that the work requires. In the framing scenes, he exudes an endearing playfulness and vulnerability as a modern man seeking some sense of himself, his life and his world. But once in character, he commendably never betrays a hint that BJJ or his melodrama roles are stinging indictments of America’s racist history.

The production has several nice touches: Giancarlo Rodaz’s sets and lights that mirror the melodrama down to actually having footlights (plus a second surprise we won’t spoil.) Maria Banda-Rodaz designed the inherently comic costumes. The play has previously been accompanied by a “mellerdrmah” piano, in this case Rick Kaydas performing his original music. But Rodaz has added Stephanie Jaimes’ cello which injects both pathos and humor.

Not everyone goes to theater for this kind of experience. People will leave with divided feelings and disparate interpretations. But for some people, that’s what you can take from theater that you can’t from Transformers 7.

To read a feature story about the production, click here