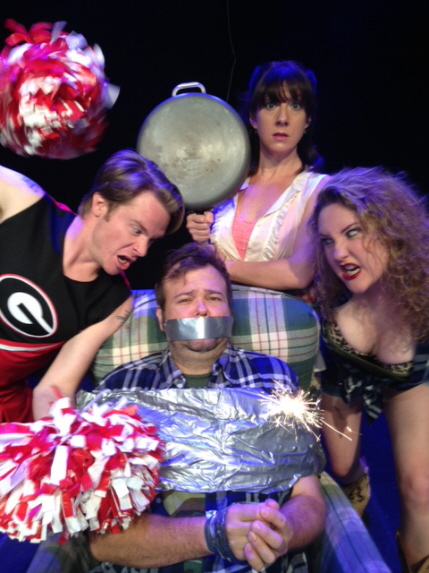 David Nail is outnumbered by, from left, cross-dressing David Hemphill, his wife Niki Fridh and her stripper/actress buddy Lindsey Forgey in Art Garage’s Exit Pursued By A Bear

Yards and yards of duct tape, a dead deer, a timely taser, emperor penguins, Shakespeare, a shotgun, a guest appearance by Anderson Cooper, copious quotations from President Jimmy Carter and the titular ursine creature all are ingredients in this unalloyed hoot of an anti-spousal abuse comedy, Exit, Pursued By A Bear at the Theatre At Arts Garage.

This gleeful satire occasionally may seem like a too-extended Saturday Night Live skit even at 70 minutes, but playwright Lauren Gunderson has a delightfully wicked sense of humor matched by Louis Tyrrell’s direction and a madcap cast featuring Lindsey Forgey, Niki Fridh, David Hemphill and David Nail.

For all the chuckles, Gunderson and company have gently woven in the requisite message that women must find the self-respect to escape relationships that are mentally, physically and spiritually abusive. But it’s delivered as being so much of an inarguable article of faith that it doesn’t feel preachy because this humor is too broad to take anything too seriously for long.

The audience is seriously off-balance in the opening moments when a stereotypical redneck Kyle (Nail) is wheeled through the sliding glass door of his north Georgia trailer, bound to his favorite La-Z-Boy recliner, duct-taped from his mouth to his ankles.

With Kyle as an unwilling observer, his wife Nan Carter (Fridh) begins acting out scenes from a play that she has written to document Kyle’s abuse. Kyle’s part in these scenes is played by Nan’s best buddy, the stripper and aspiring actress Sweetheart (Forgey), who dresses precisely like the plaid-clad Kyle – aside from the leopard-skin brassiere sticking out of the camo T-shirt. Kyle may be the intended audience, but the two women perform their scenes and speak to the patrons in the Arts Garage.

The play-within-a-play is Nan’s farewell to Kyle. When it’s done, she plans to leave him in their trailer covered in meat so that the bears can come eat him while she and Sweetheart head west to a new life of fame and fortune.

“Our plan is to let nature in and get the hell out,” she informs a sputtering and muffled Kyle.

Most of the time she is downright giddy at the prospect of a resurrected future and finally having a chance to rub Kyle’s nose in his behavior. But when her resolve flags, she calls over her lifelong pal, Simon (Hemphill), a flamboyant gay man who arrives dressed in a girl’s cheerleader outfit as a way of expressing moral support. “We went to the prom together – in a slightly ironic way,” he explains.

But Kyle hasn’t given up yet and he has a few scenes he wants to replay before the curtain comes down, specifically the months of their courtship and his proposal. Once the gag is removed, he says with faux contrition and dry understatement, “I think we got off on the wrong foot.”

Much of the humor comes from the juxtaposition of accents that twang like banjo strings regurgitating homilies from Dr. Phil and Oprah and pop culture, but using erudite vocabulary and stylized phraseology that Nan and Sweetheart have learned by reading Shakespeare and trendy magazines.

Nan is far from apologetic; those sources have assured her: “Revenge is an American core value.”

Kyle is pond-scum, but Nan (and Gunderson) give him a final soliloquy (Nan has to explain that word to Kyle). In it, Gunderson incisively explores the rationalizing mindset of men who abuse their wives. In this case, Kyle feared he was losing Nan to Simon, as silly as that sounds, and he “took the easy way out” by hitting her in frustration. Inexcusable, but Gunderson’s Kyle is not a mindless sadist.

The title, a famously odd stage direction taken from Shakespeare’s A Winter Tale, was actually chosen by Gunderson before she knew what the play would be about. But it not only reflects Nan’s plan for Kyle and herself, but reflects her recent joyful absorption of “culture.”

Tyrrell has directed this with a steady propulsive pace and he has helped the cast find Gunderson’s tone in which the daffy protagonists blissfully and determinedly pursue their dreams, no matter how wacky. It’s a mindset that enables Nan to say proudly with a sense of self-discovery, “I’ve seen Thelma and Louise, so I know I had a choice (slight pause) although I didn’t think I could drive a car into a canyon.”  Or listen to her admonish Kyle’s protests to being killed by a bear: “I swear Kyle; you are killing the buzz.”

None of this would work a whit if not for the total commitment of the cast, immersing themselves without a bit of eye-winking reservation. They don’t teeter on the edge of caricature, they happily tumble over it, yet they manage to inject  humanity into these folks.

Nail and Hemphill, returning home for the holidays from pursuing careers out of state, are fine in their roles. But its Fridh (most recently an uppercrust matron in Stage Door’s Rumors) and Forgey (one of Slow Burn Theatre’s leading ladies) who shine like freshly-waxed linoleum, absolutely reveling in lines like “If I was trashier, I’d spit.”

The script, which had a reading last season at Arts Garage, went on to three full productions elsewhere. Its homecoming is welcome as the fledgling Arts Garage struggles in its second season to find an audience, understandable given the elephant in the room. But the truth is that Bear makes good on Tyrrell’s promise for engaging, off-beat and thought-provoking theater that he brought last summer with Cabaret Verboten.