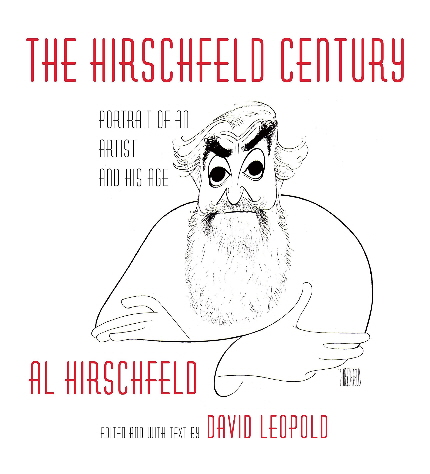 If you’re a theater aficionado and received a nice check from your mother for the holidays or maybe from a busy relative gave you a gift card to Barnes & Noble, what should you spend it on? Here’s our review of a few books related to the arts.

Art lovers know nothing equals seeing a work in person to appreciate the complexities, the technique and the tactile proof of the craft involved in creating it. Anyone who has seen exhibitions of Al Hirschfeld’s work can attest to the extra dimension that emerges from viewing his works a few feet away, often on canvas size presentations.

But coming close to that experience is this amazing two-dimensional gallery strolling through a representative majority of the famed artist’s work from the 1920s until his death in 2003. Hundreds and hundreds of his visions are painstakingly reproduced, from his early posters for Hollywood films, to the rarely-seen watercolors of native life in Bali, to the evocative portraits of African-American performers in every genre, to the iconic pen-and-ink caricatures and stage scene sketches that have become the ever-lasting iconic symbols of 1950s Broadway hits from Waiting For Godot to Hello, Dolly!

Enhanced by David Leopold’s contextual accompaniment, it becomes clear that Hirschfeld’s work – and this volume indirectly— are a visual history of American pop culture across the 20th Century ranging from the classic image of George Bernard Shaw manipulating Liza and Henry in My Fair Lady to the flowing locks of rockers Arrowsmith.

The volume shows off his wide range of styles beyond the line-intensive work for The New York Times and Herald Tribune, including early photo-realistic portraits of movie moguls, plus murals, advertisements, book jackets, magazine covers,

The Line King’s cross-hatched textures and Nina-adorned caricatures captured still-easily recognizable faces of celebrities from the Lunts to Liberace. But the breadth of his work also preserves the zeitgeist of Broadway and Hollywood – single works containing dozens of A-listers gathered at the Stage Door Deli or huddled around a table in rehearsal or crowding under a marquee on opening night.

Yet as famous as he was for finding and exaggerating key features of a famous person’s visage, this book underscores his finest work: showing actors, musicians and, above all, dancers, all in motion. His ability to use spare but sweeping curving lines infused those works with an illusion of kinetic action that more accurately recreated the performers’ art than a video.

Archives have documented the century with thousands of photographs and millions of words. But Hirschfeld, who excelled at using impressionistic craft to capture a single person’s essence, proves in retrospect to be a precise historian of the entire era. 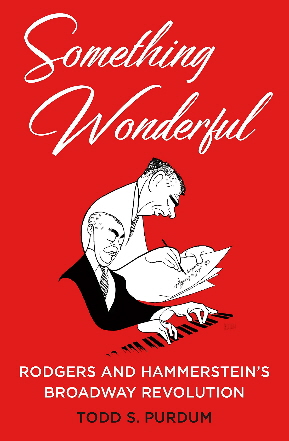 There are scores of books written about the Rodgers and Hammerstein partnership, as Todd Purdum readily admits in this volume.

But Purdom is a veteran New York Times political reporter and those skills of meticulous research, original interviewing and an ability to weave thousands of factoids into a narrative sets this one apart.

Underscored by the appendices listing hundreds of printed sources plus pages of footnotes, Purdom has created what journalists call a “rake it in a pile” story –assembling a great deal of existing knowledge, combining with original digging and producing a skillfully amalgamated, polished, clearly recounted recap that takes a step back and sees the forest as well as the trees.

Purdom is pretty darn good at it, although not as skilled as my friend Scott Eyman whose accounts of Hollywood icons read like a well-crafted novels. Purdom is also very clear-eyed in appreciating how R&H changed the landscape of American musical theater, but also in recognizing that others like Stephen Sondheim moved the genre into places that the two men respected but couldn’t adjust or participate in effectively.

Other books and articles have reflected that these men were complicated human beings with lauded virtues and carefully hidden faults. But Purdom, like a good journalist, doesn’t shy away from either end of that spectrum as many of the others have done. It helps that he has interviewed family members and friends, as well as dove deep into correspondence filed with various institutions.

Another strength is that Purdom has analyzed Rodgers’ music and Hammerstein’s lyrics as a7 process. Anyone directly involved in theater knows that the “final” version on stage has undergone a difficult and tumultuous creative journey with revisions, second thoughts and the like all the way up to and occasionally after opening night. Purdom tracks the evolution of several classic pieces from idea to performance. He documents how Rodgers might change a song during rehearsals or insist an actor hew to a certain pattern and rhythm. He often prints a draft of one of Hammerstein’s lyrics and shows how it changed until it became an iconic part of our culture.

The book is filled with those chatty behind-the-scenes stories about how your theater sausage is made, with egos and politics threatening to – and sometimes succeeding – in changing what you see. Among them, he takes time to look more deeply into the “failures” like Pipe Dream and Me and Juliet, especially how Allegro haunted Hammerstein through his entire life.

Again, it’s no secret now, yet the book discusses Rodgers’ genius but also his alcoholism and womanizing; Hammerstein’s vision of what people should be, but also his sophisticated pragmatism; both men’s business bent that made them wealthy including a Disney-like proliferation of South Pacific merchandising; their reticence to give adequate credit to collaborators like dance arranger and composer Trude Rittman and their short-changing of director-bookwriter Josh Logan.

Purdom also makes it clear that the two men were professional colleagues who respected and valued each other, but who in each their own way was very guarded to the point that they never knew whether one liked the other personally.

He puts his research in context such as noting that South Pacific tickets were so hard to get that the weekly ticket gross had a face value of $7,000/ But the total; of what patrons actually paid was about $25,000.

He skewers legends like that of (take your pick) Billy Rose or Mike Todd or Walter Winchell or Winchell’s secretary seeing Oklahoma in New Haven and telegraphing back to New York: “No legs. No jokes. No chance.” Purdom writes, “Winchell and Rodgers would confirm in an exchange of letters years later, that it was Rodgers himself who, after the New York opening, told Winchell that some unnamed wag has dismissed the show in New Haven with a racier putdown, ‘No legs, no tits, no chance!’ to which Rodgers had added, ‘And now no tickets.’ ”

If this edition adds little new ground, it remains a highly readable well-researched assimilation worth a read.

Blowing The Bloody Doors Off and Other Lessons In Life, by Michael Caine, Hachette Books, 274 pages, $28 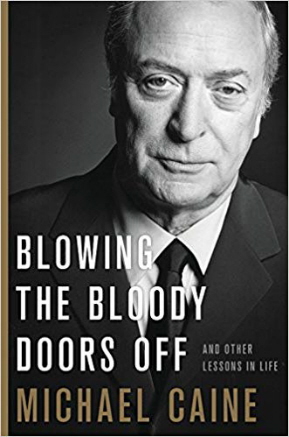 Yes, Michael Caine has played heartless, cold, murderous scum. But you just know that, like Tom Hanks, he just has to be a nice guy in real life. This book proves it.

His third book is, on the surface, an invaluable tome of advice to aspiring actors on stage and in film much as an earlier work, Acting On Film.

Indeed, the 85-year-old knighted Caine shares a year’s worth of master classes in building and sustaining a career as well as nuts and bolts tips about performance gleaned from his career dating back decades.

But the self-effacing humorous travelogue of his career is woven seamlessly into a broader set of lessons on how to live a satisfying and fulfilling life. Many are intentionally applicable on and off the set, in reel and real life: Keep your temper, stay grounded, pay it forward, don’t let the past control your future, when to break the rules, reinvent yourself.

If most of these are well-worn bromides passed down by grandpa while sitting by the fire, they have an inexplicable ring of truths discovered and tested by time. And most are backed up with anecdotes of when he did and didn’t take his own advice.

And, of course, he has a seemingly bottomless store of stories about bold-face names and what they were like to work with (and party with) in real life, or as real a life as celebs can manage. Although there a few folks who he has less generous words for, almost all come in for a warm memory, and about a fourth of these people he terms friends or good friends or close friends. This makes sense in that he came into the business when many of the great and talented were coming up alongside him out of poverty or class prejudice, or had only recently become icons themselves.

The only down side is that he repeats him wisdom over and over as if he didn’t reread the book before he sent it to an editor, or an editor didn’t read it very closely.

He also answers the question that his fans have asked for a half-century now: How can you make Educating Rita and Jaws: the Revenge, Dirty Rotten Scoundrels and Cars 2, Hannah and Her Sisters and The Magus? He has two or three answers. You’ll have to read this to find out.