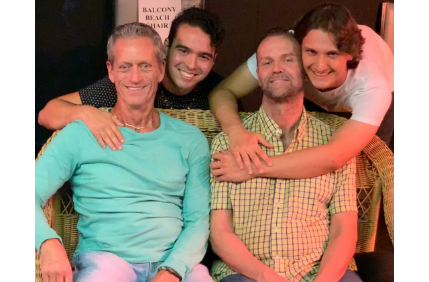 In 1968, The Boys in the Band was and still is touted as an unflinching depiction of closeted and openly gay life in America at the time (although some people objected to the portrait of the self-loathing Harold.).

In 1985, The Normal Heart was also hailed as a theatricalized documentary of gay life in America in the depths of the AIDS crisis.

Flawed as it is, few would place Boys of a Certain Age in those ranks quality-wise. But Dan Fingerman’s script being presented by Empire Stage is an incisive and insightful examination of gay life in 2019 that may be eligible as a time capsule of this moment.

By bringing together two 60-plus gay friends, plus one’s adult gay son and the other’s gay nephew, Fingerman dissects four people who share a sexual identity, but who have chosen profoundly divergent lifestyles.

And by having the two generations collide, the play recalls how difficult it was for the older generation to achieve what a younger generation nearly takes for granted.

And by setting it firmly in the Trump era, Fingerman underscores over and over the fear that those hard-won gains are in danger of disappearing.

Jeffrey Bruce’s direction makes the most of Fingerman’s copious witticisms, bon mots and zingers, which one character likens to “a gay Algonquin round table.” But he also mines the recriminations, accusations, regrets and anger that swirl as these people tempestuously interact in a society that offers more acceptance than ever before, as well as recognizing enough alternative alternatives to keep the acronyms and pronouns of identities growing.

Finally, it provides a voice to the aging title characters who – like most Boomers — reflect on mortality, lost chances and this brave new world. It is a rare look at an age group that coincides with a large percentage of the patrons of Empire Stage and Island City Stage. As one character says of the social evolution, “It was like watching a football game and all the rules have changed.” Another remembers going to so many funerals when the cause of death was AIDS; now it’s stroke and cancer.

These strengths are offset by weaknesses in the script and the production.

For one thing, Fingerman hasn’t just situated this in the present day, he has slathered it to choking with a dozen hot button issues for the quartet to didactically argue including Israel, Phillip Roth, open relationships, social media, and over and over and over (and over) the cancerous occupant of the White House. Hopefully, this creative outing has enabled Fingerman to exorcise some his personal fury. The play, which had a couple of earlier productions, was actually written four years ago, but seems to have been amped up to reflect the current socio-political chaos.

Then there is the weird episodic structure in which characters passionately argue in a growing arc, and then the stage abruptly turns blue as if the narrative was amputated in mid-scene. The characters move to other positions on the stage, the lights go back on and it’s supposedly 10 minutes later or a half hour later. Sometimes those scenes have no more than a dozen lines. That herky-jerky jalopy feeling robs this of any dramatic flow, even though everybody in the audience knows precisely how this will end.

The set up: Ira is a classic “old queen” who has been out most of his life, fighting homophobia, family rejection and social injustice in general. Age is catching up with him and he walks with a cane. With the Teutonic accent of his parents, he issues forth a stream of strong opinions (especially about Trump) as well as flinging well-crafted often sexually explicit one-liners, such as referring to a schoolmate jock, “He was my right hand’s best friend.”

To the veranda of his Fire Island home, he has invited his 26-year-old nephew Christopher, a “straight-presenting” gay man who is having relationship problems and who – to Ira’s vociferous horror — supports Trump and other conservative tropes. He resists stereotypical expectations for gay men, proud that he like to watch college football while drinking beer – what one character describes as “gay-Bro,” “the Stepford nephew” and a “Ken doll.”

Also invited is Ira’s friend since Jewish religious school, Larry, an educator who stayed in the closet for decades and whose marriage to a woman broke Ira’s heart. Even tempered and compassionate, Larry is also trying to rebond with his son, Bryan, and gingerly dealing with a long separation from Ira.

Finally, along for the ride is Bryan, an aggressively abrasive and disaffected jerk who nastily criticizes everybody and everything including his father. A flailing writer working in a socialist bookstore and flinging his sexuality defiantly in anyone’s face hoping to offend someone somehow, you just want to haul off and smack him upside the head for 98 percent of the evening.

Everyone has back stories. Some the audience learns as we go along told in fourth wall-breaking monologues and others are revealed among the quartet as the heated interactions intensify. Of course, almost everyone has had sex with each other at some point before the play begins. Some of these stories feel contrived, but they add some depth to the characters. There is no surprise that all four will come to a separate peace with each other before the 90-minute journey ends.

Bruce does what he can with the script – his own bent for wry humor is imbued throughout. He also inventively creates noticeably different tableaus to open each scene to indicate the passage of time.

Gisbert Heuer, with his gentle German accent, gives the most vibrant performance as the outspoken Ira who shuttles between outrage at the current political scene, concern for his nephew, and pain for the tragedies of the past.

The performance of the younger actors, Luis Albaer as Bryan and Matthew Salas as Christopher, are more problematic, due in part to the script that basically gives them one note to play, and partly because they are never convincingly living in the moment. They are always actors saying lines.

There are times that Boys of a Certain Age seems like an unfocused mess. But other times, Fingerman, Bruce and company have produced a reasonably faithful snapshot of the variety of lives in our current moment.