Company Has Shining Moments, Falls Short Of What Could Be 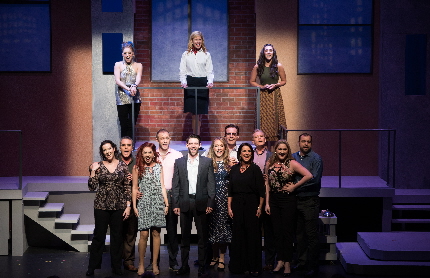 MNM’s production of Stephen Sondheim’s groundbreaking musical Company is intermittently lit with incandescent performances worth the price of admission, but the overall piece disappointingly lacks crispness, passion and, until the last 10 minutes, heart.

Thanks to the brilliant material and the earnest efforts of MNM’s talented artists, this production is not a wasted night of theater by any means. But compared to its potential, it falls short.

There are notable exceptions: Leah Sessa under the direction of Bruce Linser and musical director Paul Reekie delivers one of the funniest and most touching Amys you’ve seen, the frantic and frenetic bride-to-be both in her torturously tongue-twisting “Getting Married Today” and in her hilarious book scenes.

Erika Scotti nails the acerbic “Ladies Who Lunch” with her own take on someone whose acidic criticism of the shallow, bored denizens of haute society is really a merciless savaging of her own empty life.

And Mallory Newbrough – unrecognizable as Belle in Beauty and the Beast last month and Janis Joplin in last spring’s Beehive – embodies a downtown club enthusiast voraciously embracing every cranny of urban life as she trumpets the superb paean “Another Hundred People.”

To be fair, opening night was crippled for more than two hours with malfunctioning microphones, unbalanced sound levels between the band and the singers, and simply sloppy execution of sound and light cues. Hopefully, the problems will be resolved quickly because the audience had to struggle to meet the show more than halfway due to the off-putting technical flaws. MNM had no such problems in its fine productions of Hair, Spamalot and The World Goes Round, as we recall.

For the culturally deprived, Company does not have a plot so much as an overarching concept – a clear-eyed examination of the yin and yang of marital relationships expressed in the song lyrics: “You’re always sorry, you’re always grateful,”  and “It’s better living it than looking at it.” A series of vignettes are set on the 35th birthday for Robert, a Manhattan metrosexual unwilling to commit to a relationship. Recalling telling incidents, he reviews the marriages of the five couples who are his best friends and his liaisons with three girlfriends.

Company did not invent individual techniques. But it melded a dozen innovations through the genius of Sondheim, Furth and Prince into a sui generis whole-is-more-than-the-sum-of-its-parts that no one had seen on a mainstream stage.

The central problem in this edition is the lead actor, Robert William Johnston. He has given outstanding performances, from the title character in the rockin’ Bloody Bloody Andrew Jackson for Outre Theatre Company to a stunning dramatic turn as the troubled teenager in Ground Up and Rising’s Vincent River.

But whether he needs more experience, more rehearsal, more direction or is maybe just miscast, this fine actor doesn’t communicate the two warring levels at the core of Robert – the protagonist’s choice to be a cool if amiable observer of life which conceals a roiling angst as he slowly recognizes that his reticence has left an abyss in his life. In each scene, his reserve should be shaken by inches and his angst grow so that when the fear and need explode in “Being Alive,” it’s not a surprise; it’s been building all night. This Bobby Baby seems barely affected by most of what happens around him. When he sings, “Marry Me A Little,” the Bobby in the script hasn’t actually bought into the title as he croons, “We’ll look not too deep, We’ll go not too far. We won’t have to give up a thing, We’ll stay who we are…. You promise whatever you like, I’ll never collect.” Also, on opening night, his voice was not especially strong.

But in fact, the first 45 minutes of the show is a tad listless and unfocused. Proof? The evening noticeably catches fire when Newbrough sings “Another Hundred People.” Two scenes later, the show explodes with Sessa’s performance, again, a contrast with much of the rest of the show.

A nod is due Nicole Kinzel who has been laboring in ensembles for years and finally gets the spotlight she deserves as the adorable if a bit ditsy stewardess April. Her bedroom scene with Johnston is a solid chuckle without being cruel, and her duet with Johnston in “Barcelona” is nearly perfect. She also melds nicely with Jinon Deeb as Kathy and Newbrough on the faux Andrews Sisters’ “You Could Drive A Person Crazy.” 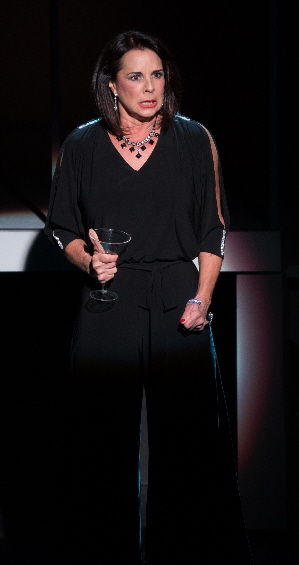 The cast list encompasses some of the best talent in the region like Laura Hodos and Wayne LeGette as the karate couple Sarah and Harry, Clay Cartland and Amy Miller Brennan as the quirky Peter and Susan, and Lindsey Corey as Jenny, with Larry Alexander as the calm mature Larry, Josh Kolb as the ever-loving Paul and Joshua McKinney as David.

Tim Bennett created the urbanscape for the characters to roam, Linda Shorrock and Leslye Menshouse whipped up costumes including Marta’s look right off the cover of Cosmo.

There is a better show possible. If you doubt it, look at the DVD of the 2006 Raul Esparza edition or simply play the 1970 original cast album – not for the larger orchestra and other fiscal-based resources, but for the sense of desperately lonely people with strangled repressed passion aching to break free.

Side note: MNM producers asked veteran local actress Barbara Bradshaw to give an opening tribute to the late Michael Hall, the co-founder of the Caldwell Theatre Company which pioneered regional theater in South Florida. Her heartfelt memories and recognition of his importance to the theater community were touching.

Company from MNM Productions plays through Augsut 6 at the Rinker Playhouse at the Kravis Center for the Performing Arts in West Palm Beach. Performances 7:30 p.m. Thursday-Saturday, 1:30 p.m. Wednesday, Saturday and Sunday. Running time 2 hours 30 minutes with one intermission. Tickets $45. Visit www.kravis.org or call (561) 832-7469.

One Response to Company Has Shining Moments, Falls Short Of What Could Be