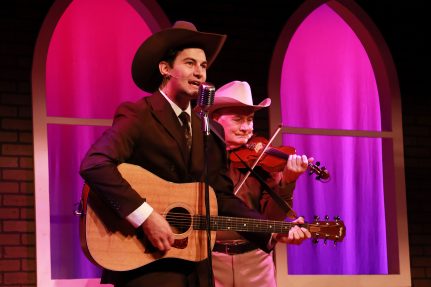 For the non-musicologists in the audience, initially it might seem strange that Hank Williams: Lost Highway opens with the soul-stirring voice of a poorly-dressed Black man sitting in front of ramshackle gas station in southern Alabama pouring out a cross between an impassioned spiritual and the unvarnished original blues, “This is the Way I Do.”

But the creators of this bio-musical intentionally, metaphorically and physically situates its main Grand Ole Opry setting between, on one side of the Actors Playhouse stage, that Black man’s filling station where the back country blues dominate, and, on the other side of the stage, a waitress-fangirl cleaning up at a rural truck stop while listening to the radio.

It’s fitting that both characters are on stage most of the evening listening and reacting to the tumultuous life arc of the iconic singer-songwriter who fused “hillbilly music,” honky tonk and the ethnic-centric blues into a progressive step forward for country music in the 1940s and early 1950s before his death at age 29. They represent the origins and the success of his near revolution.

A cast of ten actor/musicians convincingly narrate to us a clear-eyed yet affectionate recollection of Williams’ troubled life and memorable legacy. They are represented by biographical scenes interspersed with a healthy helping of Williams’ songbook: encompassing the essential hits from “Your Cheatin’ Heart” and” I Saw the Light” to “Jambalaya” and “Lovesick Blues.”

There’s the rousing “Honky Tonk Blues,” and my personal favorite of all his songs, “I’m So Lonesome I Could Cry” (Best version of this ever is Jimmie Spheeris’ 1976 cut on the Ports of the Heart album).

But there are lesser-known songs that reflect how his music was rooted early in church music and especially in down home blues taught to the young lad by Rufus Payne, represented here by the aforementioned bluesman Tee-Tot.

The evening was written by Randal Myler (also author of the musical It Ain’t Nothin’ But the Blues) and Mark Harelik (who says his was only Jewish family in his small Texas town). It remains a laudatory paean but never shies away from the hero’s shortcomings. They also lather on the humor with delightful abandon, such as the plentiful country-isms like “She could melt the wax off a Dixie cup at 50 feet,” all uttered with a twinkle as the characters themselves joyously insert what they know is an acre of countryfied corn. (Remember TV’s Hee Haw?)

Andy Christopher, who has done the role twice before in regional theaters and toured nationally in The Buddy Holly Story, is a comfortable genial fit for Williams. He creates someone we care about even as Williams haplessly spirals into alcohol and drug abuse, and alienates everyone who loves him including his wife. His voice is not a doppelganger for Williams’ but its close enough that only deep tried and true fans will notice. He can even issue forth a yodel like Williams.

Backing him up both as actors and musicians are a superb group: starting with Elizabeth Dimon as his loyal but long-suffering Mama Lilly, Barry Tarallo as manager Fred “Pap” Rose, Jeremy Sevelovitz as the lead guitarist and childhood buddy Jimmy; H. Drew Perkins as another friend Leon who plays a sizzing fiddle and toured with the original 1987 edition; Russ Wever on steel guitar, and Sofia Porcel as the truck stop princess.

Special mention is due to Lindsey Corey as his talentless wife Audrey who can’t sing well, although South Florida audiences know Corey has a lovely voice; and Stephen G. Anthony on bass who not only created the part during its New York and nationwide stands but doubles here as musical director and creative consultant.

And last but not least is Chaz Rose who floored audiences in Actors Playhouse’s production of Memphis. Anytime he opens his mouth to celebrate a gospel title or rip the guts out of a blues number, he stops the show with a performance overflowing with pain and resilience, just erupting out of his vocal chords. Make yourself a promise: Anytime you hear he’s going to be in anything locally from Shakespeare to children’s theater, buy your tickets just on the strength of his appearance.

The entire affair is helmed by David Arisco who deftly balances the light and dark, and infuses light humor throughout. As always, Jodi Dellavenutra provides an evocative set enhanced by period props and set decorations.

You might not be a country-western fan, but there’s something about this music played live that transcends the finest recordings, remasterings, TV guest spots and talented You Tube tribute bands. The passions giving birth to these songs, the energy of the onstage musicians and other factors makes their universality winning and perfectly accessible.

Even with a Friday night opening crowd with a bunch of tired businesspeople ending a long work week, the assemblage couldn’t help but clap along and surreptitiously tap their boot-less footwear.