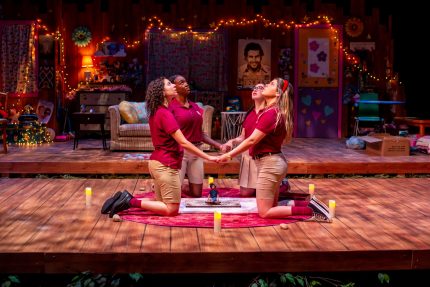 Forgive me if I need a moment to shake off the getting-run-over-by-a-Mack-truck experience of watching Zoetic Stage’s production of Our Dear Dead Drug Lord.

Some of my colleagues read a new play’s script ahead of opening night; I’d rather see it as much an unknown territory as the couple from out of town intrigued by the title.

I’m grateful that I didn’t know anything beforehand because I didn’t see coming the left turn into Tony Kushner territory deep into the journey – and I’m genuinely glad. I will really strive not to spoil it for anyone.

This Florida premiere written by Miami native Alexis Scheer is a stunning – a carefully chosen word – piece of pure theater. A scene can be downright hilarious then suddenly blood-chilling, and then, as the blood is still chilling, there are laugh lines.

I admit that I’m still trying to analyze the thematic goal of the final two minutes containing the third surprise turn, but by that time the entire undertaking had succeeded as thrilling, thought-provoking theater.

Co-directors Stuart Meltzer and Elena Maria Garcia envisioned a unique take on a difficult penetrating piece and guided a quartet of actresses to superb performances as they delve into the darkest recesses of any modern American teenager who looks just like your kid at home.

Welcome to the Dead Leaders Club, a recently-banned group from a private school in 2008 Miami. The collection of teenage girls now meets in the impossibly large treehouse behind the home of its leader’s wealthy parents.

While the club was created in 1964 to study the life of JFK, this Gen Z study group has preferred Saddam Hussein and now nurtures an adoration of the vicious powerful drug lord Pablo Escobar whose blown up mug shot graces the clubhouse wall.

Using adopted code names, we watch the 18-year-old Cuban-American leader “Pipe,” the ultra-imaginative 15-year-old Jewish “Zoom,” and the 17-year-old Haitian-Cuban “Squeeze” who has absorbed an interest in politics from her father as they gather to initiate “Kit,” a sensual Columbian 17-year-old with a mysterious aura and who claims (seriously or playfully) that she is Escobar’s daughter. All of them are feeling their way through finding themselves in experimentations common to late adolescence.

Well, theirs is just a bit darker. The initiation invokes a magical séance relying on a Ouiji board, candles, a chalk circle, incantations, a snort of cocaine, and a sacrifice – in this case snapping the neck of an alley cat. This is only the beginning of a slow but consistent sprinkling of the mystical that the teens gleefully toy with as they investigate the uncertain world around them, what one describes as “Something bad that feels good.”

Following Scheer’s script, the girls often are talking at the same time, words and emotions overlapping in a cacophony of verbiage. The actresses and directors make this so convincing you feel like you’re eavesdropping.

Their subject matter ranges from pop culture (“Oliva Benson is my spirit animal”)  to racism to how the club will look good on college applications to free speech to the upcoming election — and, of course, sex.

Yet everyone has a side they only reveal to these soulmates as the months pass. Kit has been slashing herself. Zoom has positive pregnancy tests even though she swears has never had slept with anyone yet.  Pipe is still struggling with the death of a younger sister she was supposed to be watching over.

But now it gets problematic to explain further: Secrets are shared and the bond grows closer, then it gets tested. And then…. Well, go see it. One development is especially harrowing at this precise moment.

I can’t pretend to have “gotten” everything that Scheer and the directors wanted me to; I might have to go back once or twice. But they and their team provided a fascinating puzzle to turn over and over.

Special honor is due Meltzer, Garcia and the quartet because Scheer’s script is laid out in adjacent columns for each character. That is fine when they all talk at the same time, but poses a massive challenge for the cast and director to determine when only one person is speaking or two people are dialoguing. This isn’t a new artistic construction conceit, but it’s always a huge pain to decipher for someone reading the script cold.

The quartet of actresses, all young adults in real life, never ever fail to make you think these are teenagers flailing around, trying out ideas, lifestyle choices. Incidentally, all are either Miami natives or went to school here.

Sofia Duemichen’s Pipe exudes the command of leadership, the profound loss suffered years ago and the sexual confusion as a secretly questioning person.

Rachel Eddy’s Zoom is the source of much of the humor as a somewhat naive, impulsive, excitable storyteller whose imagination enjoys spreading out in intricate but increasingly unlikely explanations.

Gina Fonseca creates a Kit who seems more worldly-wise than her clubmates and — not trusting life — never completely allows us to see the secrets inside her.

Mikayla Queeley’s Squeeze is a credible teen with a social conscience, political outlook and a wild streak willing to create a bizarre talent show dance.

The supposed treehouse under wooden rafters that the club uses is, as the script requires, bigger than the garage apartment I had after college. But it is brilliantly designed and dressed by Jodi Dellaventura, adorned with precisely the accumulation of what a high school girl with an unlimited budget would use to fill her hideaway, everything from a raft of stuffed animals to cut out flowers pasted on the wall, some provided by prop mistress Miriam Sierra.

Matt Corey’s sound design includes ominous chords and thunderous drums that could be our heartbeats. Tony Galska’s lighting evolves with the emotional landscape. Marina Pareja captures the prep school uniform that changes as the seasons do.

One of Sheer’s several triumphs in this 2019 script produced off-Broadway is the razor-precise dialogue of teens, its rhythms, its vocabulary and its deep, deep dive into the psyche of these girls who are both outsiders and representative of their generation desperately seeking an identity for the future.

The co-directors’ staging is impeccable, especially as the characters bounce around bubbling and burbling words, how the play crescendos and an inventive piece of crucial stagecraft.

Even as the play rushes by, it still could use a good trimming because the narrative and character-setting points it wants to make are well-established well before the climax. For instance, there is a sequence when Squeeze teaches that dance to her friends that she plans to use for a talent show. It’s quite funny and reinforces the sense of sisterhood of the group, but it seems unnecessary.

There is one major dramaturgical error in my humble opinion: Most of the climax occurs in Spanish. While we Anglos may divine a watered down, vague guess what is being said in this turning point in the play thanks to the actor-director skills, je ne comprends pas l’espanol.

BUT…. Do not read the digital-only program before the play starts because it is all translated there, which isn’t much help during the performance if you don’t speak Spanish. Worse, if you see it in the program before the play starts, it ruins the shock of what is to come. (For the same reason, don’t open the playbill and look up the cast of characters.)  I’m serious about this.

We presume the playwright insisted on this non-English staging, but she is not doing her play any favors for a large portion of her audience, especially if she wants this performed often outside South Florida. If the idea was to amp up the mysteriousness, then that aspect will be neutralized for the Spanish-speaking segment of the audience who will understand what is being said. And having read those the words in the playbill, indeed, it’s clear they would elevate the dramatic punch if you knew what is being said in English.

In any case: It may be apocryphal, but the story goes that a New York critic got sent to Miami in 1956 to review the American premiere of Waiting for Godot at the Coconut Grove Playhouse. His review opened with something like: “I have no idea what it is I just saw. But it was great.”

Our Dear Dead Drug Lord is not a great play; it has flaws for all its considerable virtues. But indisputably, Zoetic’s production of this riveting incisive script is one that will likely floor you, dig deep under your skin and will force you to think about it for days afterwards. And that’s as great an experience in theater as you can hope for.

Covid protocol: Masks are recommended but not required. Proof of vaccination or recent testing is no longer required.  The totally non-paper ticketing means that tickets are sent by email or text to your phone (even if you get them from the box office) and that electronic ticket is what must be shown to the ticket scanners at the door; they cannot scan a paper printout. The program can only be accessed on your phone using a QR reader app, assuming you have a phone and a QR reader app – and they are hard to read on a phone to begin with. But I warn you again, do not read it before the performance.