Estefans’ Bio-Musical On Your Feet Gets Miamians’ On Theirs 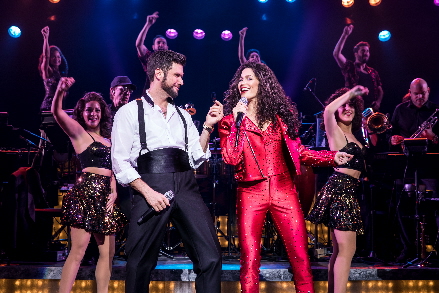 Mauricio Martinez as Emilio Estefan and Christie Prades as Gloria Estefan in On Your Feet! / Photos by Matthew Murphy

Joy suffused the house on the “opening night” of the national tour of On Your Feet! the bio-musical about Emilio and Gloria Estefan.

Part of the palpable elation pouring both ways across the footlights at the Arsht Center was the Hispanic Horatio Alger story of determination leading to success. Part of it was a score based on a skilled recreation of the Estefans’ pulsating passionate songbook. Part of it was a troupe of singers, dancers and on-stage musicians exploding in finely-crafted performances.

But the underlying reason was simply that it was “our” story and “the cast’s” story being celebrated. “Our” refers to far more than Latinos, or immigrants, or minorities, or Miamians, although it’s about them, too.

As Emilio has said many times of the work, it’s about those who still believe or hope to recapture their belief in the feasibility of the American Dream.

But in this time of an anti-immigrant administration, the Miami audience gave sustained applause to one special scene. A record company executive stomps on the couple’s plea to release a song in English, saying their market is solely Spanish-speaking fans. He tells Emilio the only way for them to have an English-language hit is to drop the percussion and horns, and change his name.

Emilio lose his aplomb and says with a rare show of fire, “Change my name? It’s not my name to change. It’s my father’s name. It was my grandfather’s name. My grandfather, who we left behind in Cuba to come here and build a new life. Now, for 15 years I’ve worked my ass off and paid my taxes. So, I’m not sure where you think I live… but this is my home. And you should look very closely at my face, because whether you know it or not… this is what an American looks like.”

The saga tracing their hard-won success as well as Gloria’s comeback from a crippling accident in 1990 is the stuff of local legend and the script has passing references to Miami touchstones such as Y-100 and Casanova’s, which elicited warm murmurs of recognition Friday. (As Gloria said in her curtain speech, this is first time an audience ‘got it all.’)

While the tour actually opened last month in that fabled center of Hispanic culture Buffalo, Broadway Across America and the tour producers are promoting the Arsht run Oct. 5-15 as “The National Tour Grand Opening.”

The show opened on Broadway in November 2015 to strong public support and respectful reviews. It played 780 performances before closing this past Aug. 20. It energized audiences danced in their seats and in the aisles during a mini-concert that closes the evening. Indeed, the crowd Friday was bouncing and swirling during the curtain calls.

But it is, indeed, a traditional well-crafted Broadway musical full of artifice, taking every opportunity to break into song and ecstatic dancing. It also has that sense of unreality as you can feel the insertion of timeline and narrative signposts. Similarly, there are dramatic declarations to the effect that “No one has done such-and-such before! It can’t be done!” which you know darn well will be accomplished about 30 seconds later in stage time.

But it’s all forgiven, even embraced as part of the trope, for two reasons: that top 40 music is electrifying and the cast invests everything with a commitment whose genuine vibe is unassailable. Further, the evening is unabashedly romantic, not overly saccharine, but just genuine emotion.

The Estefan songbook is gently slipped, not in chronological order of creation, into the heartwarming story of two Cuban-Americans who fused Latin rhythms and American pop, then fought to become a crossover genre. Much of the basic sound is very close to the original tracks, but subtly enhanced to fit a Broadway paradigm, with orchestrations supervised by the Estefans.

One of the most effective scenes occurs when Emilio has invited the shy 17-year-old Gloria to a rehearsal, an unofficial audition with her family in tow. The innately gorgeous “Anything For You” starts as a quiet duet by Gloria on a piano and her sister Rebecca providing support, until — seeing the scene through the eyes of the smitten Emilio — Gloria is singing it solo with a growing orchestral accompaniment that mirrors what eventually played on the radio – and then returns to the simple of Gloria singing simply on the piano.

Many of the hands in the original production have shepherded the tour reboot including director Jerry Mitchell, choreographer Sergio Trujillo, scriptwriter Alexander Dinelaris, a former Barry University student.

All of them understand how to reach an audience. The first act closer depicts the couple, their band, their friends and family hand-marketing “Conga” with foot leather at skeptical radio stations, playing it at everything from Bar Mitzvahs to Italian weddings, until the number is the breakout success they hoped for. The number’s buildup is so buoyantly effective that the cast takes to the aisles, kidnaps audience members and congas out the back of the house.

The script appears to have been tweaked so subtly from New York that it is hard to swear to what the changes were. The New York version had emotion but felt even more “constructed” like a classic Broadway musical. This edition occasionally felt that way, but most of the time that heart and heat carried the audience through.

Much of those qualities emanated from Miami native Christie Prades doing full justice to Gloria as the essential linchpin of the production. Ana Villafane, another Miamian who originated the role on Broadway, was incredible as a Memorex-worthy incarnation of Gloria. Prades was just as good but different. She adopts enough of Gloria’s signature vocalese and lifeforce that you never think, “Oh, that’s not the Gloria we know.”  But Prades creates her own persona with more warmth, more glow and an endless well-source of the joy that imbues everything that happens. She morphs convincingly as a tentative teenager who is reticent at first to perform, but whose confidence grows as she matures into womanhood. Prades got her start half a dozen years ago in Actors Playhouse’ In The Heights and West Side Story, and her admiring director David Arisco was in the audience Friday.

Mauricio Martinez, a drop-dead GQ handsome Mexican actor and recording artist, has a fine voice to slam out power ballads like “Don’t Want To Lose You” and the acting ability to make credible Emilio’s almost naïve belief in the power of determination to conquer any obstacle. He has thankfully chosen not to incorporate Emilio’s real-life raspiness that the Broadway actor used. But in imitating Emilio’s legendarily fast speaking voice, a lot of Martinez’s words are unintelligible. This is true of other cast members as well.

The rest of the cast is just as good, notably Nancy Ticotin as Gloria’s fiercely protective mother who distrusted Emilio and show business in general. Ticotin burns the house down with her flashback as a headliner in Cuban clubs with the song, “Mi Terre.” Alma Cuervo (an original cast member who was in Titanic and some might recall Uncommon Women and Others) provides humor and tenderness.

The other standout facet is Trujillo’s choreography and his knife-sharp dancing ensemble. With flashing skirts and swirling bodies, his work is an encyclopedia of Latin-influenced salsa as viewed through rock concert and clubbing sensibilities.

The visual work of set designer David Rockwell, lighting designer Kenneth Posner and costumer Emilio Sosa recreate not so much the real Miami, but the Miami of the mind, complete with pastel sunsets.

The unsung power behind the show is a 10-member band including seven original members of the Miami Sound Machine as well as music director Clay Ostwald and esteemed South Florida master Emmanuel “Manny” Schvartzman as associate music director.

The cast at Friday’s curtain call was joined by both Estefans, Dinelaris, Trujillo, Villafane and Andrea Burns who played the role of the mother on Broadway.