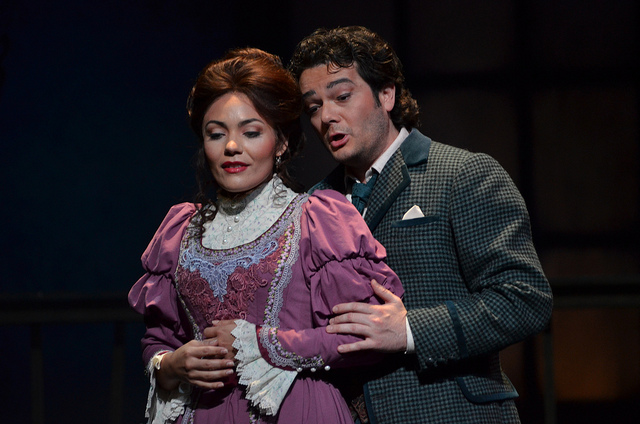 It shouldn’t work. Not anymore. Not in the 21st Century. That time-worn plot, the one-dimensional characters, the unabashed sentiment. But Florida Grand Opera’s production of La bohème underscores how Puccini’s masterpiece remains a moving, even relatable experience after more than a century of familiarity, lampoons and Broadway adaptations.

The soaring declarations of undying adoration at first sight followed by the heroine dying in a frigid artist’s garret – all of this ought to be laughable.

But the achievement of the FGO team led by Music Director Ramon Tebar and Stage Director David Gately is to distill and deliver the pure emotional truth that makes La bohème transcendentally universal. When Ailyn Pérez’s Mimi and Arturo Chacon-Cruz’s Rodolfo pledge their love, it feels as real – perhaps more real – than the most deftly-manipulative tearjerker on screen.

Doubtless, musicologists and opera buffs can find fault somewhere in this 4,716th production of what may be the world’s most popular opera, but lay audiences allowing themselves to luxuriate in the lush, affecting melodies will be hard put to spot them.

In fact, many people working on this straight-ahead traditional production have been connected to previous La bohèmes—in some cases, several times. But the result is not a company that takes it for granted, but instead a troupe so comfortable with the material that they inhabit it like putting on a favorite pair of jeans.

The principal singers are technically unassailable, but the authenticity of their passion is remarkable, especially Pérez and Chacon-Cruz in the first act arias in which they introduce themselves. Pérez (Violetta in FGO’s 2008 La Traviata) displays a sweet soprano that intentionally quavers without seeming affected. Chacon-Cruz (Pinkerton in 2009’s Madama Butterfly) unleashes a strong tenor that is never cloying and shot through with a joie de vivre. The strapping baritone Mark Walters (the title character in last season’s Rigoletto) provides a nice counterpoint with his garret-mate Marcello, and Brittany Ann Reneé Robinson (La Rondine last season) steals the stage with her saucy “companion” in the beguiling “Musetta’s Waltz”  but who is convincingly altruistic in the final act.

Tebar, now in his second season, leads the orchestra in bringing out the kaleidoscope of colors and changing tempi that the score revels in. He can be energetic – he attacked the first notes of the score by leaping a few inches into the air and coming to earth on the downbeat. But he and the musicians also caress the verdant fluidity that imbues Puccini’s genius for melody.

Gately expertly moves his cast around the stage, especially the multitudes in the street scene when you think you’ve stepped back in time. Then he freezes the assemblage in mid-gesture for the chorus’ curtain call, echoing a painting you’d see in a museum. The director also maximizes the humor that Puccini and his librettists encourage with plenty of visual comedy, especially during the Bohemians’ horseplay. When a soldier at a gate announces the arrivals of milkmaids, Gately sends a couple of prostitutes across the stage before the milkmaids arrive.

A kudo is due Mark Stanley whose lighting marks the first time in several FGO productions in which you could clearly see anyone singing despite the moody environment. A jeer is due the supertitle operator who often ran a lyric several seconds too early and had to be posted a second time when the singer actually reached the words.

This edition opens FGO’s 72nd season, notable for an “opera’s greatest hits” schedule that includes La Traviata and The Magic Flute. Technically, it also marks the first program under the aegis of its new general director Susan T. Danis, although she had little to do with this production.

While Danis has pledged a more challenging next season, this warhorse needs no excuses. When the two simpatico souls overflow with rapture, the audience needs no supertitles to know why this work had endured.

To see a promotional interview with Ailyn Pérez, click here.