Posted on December 3, 2017 by Bill Hirschman 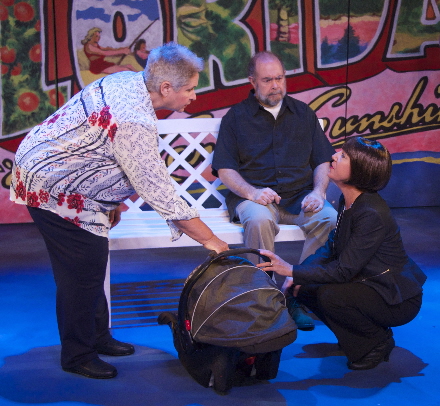 Elizabeth Dimon and Michael H. Small argue with Niki Fridh about the ultimate fate of their infant granddaughter in Theatre Lab’s world premiere of Peter Sagal’s Most Wanted / Photos by Amatista Photography PHOTOGRAPHY.

Most Wanted starts out like one of those wacky only-in-Florida tales as if it had been written by Neil Simon, suffused with wry sardonic quips reeled off rapid fire by quirky characters in increasingly off-kilter comic situations.

As Peter Sagal’s world premiere evolves at Theatre Lab, the weirdness worthy of Florida authors Carl Hiassen and Tim Dorsey does intensify, but a poignancy under the banter grows until it eclipses the humor and reveals the heartfelt play Sagal meant all along.

We meet retirees Doris and Frank, supposedly from Delaware but aesthetically right out of a deli in Simon’s Brighton Beach. We catch up to them in a cheap motel room in central Florida on an unspecified coast amid the threatened meltdown promised by Y2K. They resemble a stereotypical aging Jewish couple who know each other’s aggravating foibles too well but who still love each other; indeed, they are clutching to each other in a world whose culture, mores and signposts seem to have slingshot past, leaving them behind.

It takes a few minutes to realize what has made them seem even more unmoored than usual: They have kidnapped, well, “borrowed,” their infant granddaughter from their obnoxious obstructively possessive daughter. They have been allowed to see the girl only once every two weeks. Frank says “Their house cleaner comes more often than that.”

They have been driving south with not much of a plan other than to raise the girl. They jokingly referring to themselves as Bonnie and Clyde, but they’re more likely a doomed Thelma and Louise.

Frank tells the baby in her carrier, “The world, it’s not such a nice place anymore. It used to be filled with wonderful things, most of them you could eat. Nowadays, we have more of everything, but it’s all the same. I worry for you, darling Julia. So listen to your grandparents. We’ll teach you. We remember the way things used to be, the good things. That’s what we’re good for. We remember. But nobody listens.”

As their daughter, her husband and law enforcement pursue them, these fish out of water continue their odyssey. They meet a comic parade of uniquely Florida types who populate a peninsular version of Alice Through The Looking-Glass. One running joke – a combination of satirical observation and theatrical economics—is that everybody looks like someone else—allowing three actors to play multiple parts.

But we know where their southward journey must lead with the approaching geographic dead end doubling as a metaphor for their situation. A painful conflagration is inevitable.

The true theme of the play subtly emerges: Seniors facing mortality evaluating how they have spent their lives – especially as parents – and finding their track record lacking. It may grant compassion and perhaps forgiveness for well-intentioned inherently flawed human beings, but the legacy of their shortcomings has left human collateral damage in their wake.

As the couple faces off with their daughter in an excoriating air-clearing of past wounds, Doris says, “The terrible secret, we old people have, is that we know just how we got here. It weighs on us every day. All the terrible mistakes, all the things we would not have done if we knew that someday we would have to look back.”

One of the virtues of this production is how director Louis Tyrrell and the quintet of actors are able to locate both the comic and touching elements and then adjust the percentages of those qualities on view as the story evolves.

Sagal is the National Public Radio game show host of Wait Wait…Don’t Tell Me!, who wrote several plays including two produced by Tyrrell at the profoundly-missed Florida Stage. This work was written 20 years ago when he was in his early 30s, published but never produced. The current script has been tweaked a bit although it remains set in 1999, but it’s essentially intact because Sagal joked that he doesn’t want to “mess with the work of another writer.” Theatre Lab, the young resident professional company at Florida Atlantic University, gave the script a well-received reading in May.

Sagal’s script gives few specifics to the look and sound of the denizens, so it benefits immeasurably from the characterizations molded by locals Tyrrell, actors Niki Fridh, Matt Stabile and Michael Gioia. For instance, Fridh convincingly inhabits a gregarious gauche pawn shop owner dressed in a leopard skin blouse who deals frequently with senior clients, as well as a young clerk at an organically-observant butcher shop who has never heard of tongue in this context, plus a senior stroke victim who thinks she’s 23 years old, plus the couple’s daughter. This last is especially challenging because while Isabel is an outsized shrill near-harpy, Fridh, Tyrrell and Sagal eventually make you see that she is a victim as much as she is an antagonist.

But the rest of the cast is a gift to the audience as well. It should go without saying for veteran theatergoers that Elizabeth Dimon simply nails Doris’ mixture of smarts, determination and a slightly lost quality.

Michael H. Small’s Frank also exudes that feeling that the ever-morphing world has passed the couple by so fast that they no longer feel part of it – a silent but inescapable reinforcement that they are in the final period of their lives. We’ve said it before: We used to underrate Small due to the arguably less skilled direction he received. But in recent years with collaborators like Tyrrell, Small keeps delivering performance after performance of passion and skill with this kind of dialogue – comic and serious – that he seems born for.

Indeed, the script contains the nuances that the actors are delivering, but there is something about Small and Dimon’s performances that clothe the characters in extra dimensions of both humor and weight simultaneously from the opening moments.

Gioia, who played Dimon’s husband a few months ago in GableStage’s The Humans, paints an effective series of creatures who all look the same but are subtly different such as the Northern transplant motel clerk and the tour guide at the Little White House who doesn’t know the Trumans are dead. Stabile also deftly switches back and forth, often in a matter of seconds, from a genial detective to the put-upon father of the baby.

Michael McClain once again creates a cost-efficient set that creates precisely the right ambience including a back wall adorned by a giant kitschy Florida tourism postcard straight out of Yeehaw Junction and which later folds down into a motel bed. The aural soundscape is by Matt Corey, the lighting by Miguel Ferreira and a note perfect wardrobe by Dawn C. Shamburger.

While the setting is this New Jersey satirist’s fantasy vision of our state that Floridians will chuckle at with a knowing nod, his underlying play addresses universal issues and the work deserves a wider exposure.

Most Wanted from Theatre Lab runs through Dec. 17 on the first floor of Parliament Hall, FAU Boca Raton campus, 777 Glades Road. Performances are Thursday through Saturday at 7:30 p.m., and Sunday and Saturday, Nov. 5, at 3 p.m. Running time 90 minutes with no intermission. Tickets are $35, and $10 (cash only) for students, faculty and staff with ID at the door. Call 561-297-6124, visit the FAU Box Office or https://www.fauevents.com. Tickets available at the door upon availability.