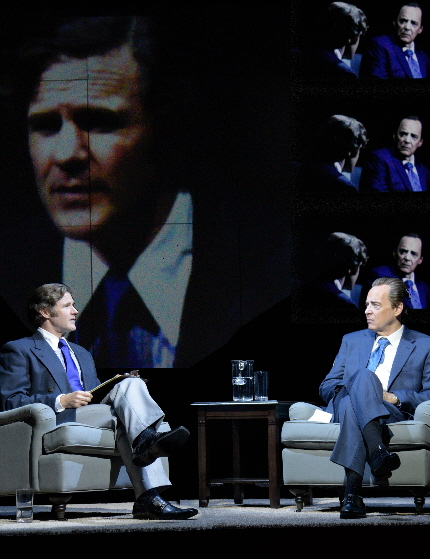 Obviously, Richard Nixon did not invent self-serving moral corruption in political life, but he deflowered the nation’s fairy tale vision of democracy by making us face inescapably the existence of pragmatic venality among some of the most elevated people we had hired to serve us.

Such a thought, four decades on in the world of Trump, Christie, Cruz and some might argue Hillary, now seems hopelessly naïve even to those of us who lived through it.

But Peter Morgan’s docu-play Frost/Nixon, getting a masterful production at the Maltz Jupiter Theatre, contains numerous warning lessons relevant to our current curdled climate. Chief is how the public’s conferring power on a surrogate can convince that public servant that the power is in itself justification for whatever purposes the wielder wishes, good or ill.

Yet, the strength of the acclaimed 2006 play and 2008 film is that no one, least of all Nixon, is depicted in pure white hats or black hats. That facet is brought out in the Maltz’s production better than in any earlier edition we’ve seen thanks to a stunningly complex multi-faceted creation by actor John Jellison under the impeccable direction of J. Barry Lewis.

It’s not that Jellison and Lewis create a David Frye impersonation of Nixon, although they adopt enough iconic visual and aural qualities that patrons who lived through those years will not be distracted.

Their Nixon has brought this on himself by his calculated almost arrogant machinations, but this performance shows someone of Shakespearian tragic proportions lost to the inescapable thrall of a secretly fragile ego that cannot risk any damage to his hard-won standing as a power player.

Jellison/Lewis/Morgan are so good that there are moments when even the most partisan will feel sympathy – until opponents cut through the haze to remind us of the damage he did to the fabric of this country, damage that endures today to the point that it has become expected. Nixon defends invading Cambodia to destroy an insurgents’ headquarters that apparently did not exist. Sound familiar?

But what resonates even louder is the creation of someone who has told lies so often and for so long that perhaps he has lost track of what is true, someone who has made self-preservation and self-promotion so integral to his being that he – certainly we – no longer know what is manipulation and what is truth. He is the crystal clear progenitor of today’s candidates who no longer value truth as a relevant or needed facet of public life.

For younger theater fans, the play sets up a verbal boxing match three years after the Watergate scandal drove Nixon in 1974 to become the first President ever to resign from office. At the time, he never acknowledged prior knowledge of the cover-up before aides had started it.

In one corner is British talk show host David Frost, a flashy figure who enjoyed being a jet-set celebrity. After a New York show failed, he feared that his own fame would fade. In 1977, he came up with an almost absurd idea: to pay Nixon to submit to a multi-evening no-holds barred interview on television, covering his historic visit to Red China, his expansion of the Vietnam War, and, most importantly, Watergate.

Nixon was licking his wounds in his California seaside home. He saw the considerable risk as the way to resurrect his image and to pave his return to the limelight, rough-and-tumble world of power, which was oxygen to the core of his being.

Frost saw the sexy “get” as his way back as well to the ego-affirming warmth of the pop culture spotlight that he needed as badly as Nixon. He was willing to risk all of his own money and his future credibility on the gamble.

The play charts the lead-up and then the interviews, documenting the high stakes for both men and their supporters. One Frost advisor, the anti-Nixon author James Reston Jr., says this is an opportunity “to give him the trial he never had” and the chance for a public conviction.

The first three of four major sections did not go well for Frost who, though an experienced interviewer, was way out of his league against the wily master manipulator.

While Morgan quotes some of the interviews at length and hews moderately close to the truth elsewhere, it is at this juncture that he invents a dazzling dramatic turning point. A few days before the last interview, an inebriated Nixon calls a demoralized Frost late at night. It is a brilliantly written and acted scene here.

Nixon exposes how he came from a modest background and has always felt looked down upon by everyone, treasuring his career as an ongoing repudiation of those people. He keeps inferring a kinship with Frost, who comes from similar straits, but really seems to be venting his own fears and motivations. He underscores how this is a  mano a mano combat that only one will survive. Intentional or not, the call energizes Frost who, for what seems the first time, buckles down and appreciates the fight with a profound seriousness.

Jellison’s performance in this dark night of the soul has to be seen to be fully appreciated from the arrogance to the self-pity to his willingness to participate in the combat as a justifiable point of pride.

The last interview is a terrific battle between Jellison and Peter Simon Hilton as Frost. But the star of the scene is Lewis whose moment-by-moment pacing is as thrilling as watching the turning point in a championship prize fight with the challenger coming back with a few jabs, met by counterpunches, then a flurry back and forth, and the final coup de grace.

Morgan edited some of that last interview to make Nixon seemingly admit more than he actually did. But as performed here, we understand the dynamics of what occurred with far more clarity than previous versions, notably the fine work by Frank Langella and Michael Sheen.

Jellison, a veteran of Broadway and regional stages, is stunning in his fine-grained powerful work. His shoulders (or some padding) give him that hunched haunted look and he has that slightly raspy baritone basement voice than sinks even deeper into funereal country as the play progresses.

Hilton does a commendable job as well, but he is hampered by a less-defined part that makes Frost a self-centered lightweight. He also lacks the gravitas that Frost actually had on camera, regardless of his off-camera playboy persona.

The third major player here is powerful presence of television, the element that likely cost Nixon the presidency in the 1960 debates with Kennedy. The Maltz staff has applied exemplary skill recreating the then recently-emerged primacy of technology. The environment is mostly simple (but perfectly chosen) rolled on furniture. But the stage is surrounded by television screens that set the scenes with fragmented images of, say, the Oval Office, or multiple angles of the interviews as they occur. Beyond them are equally compelling projections dominating a black-grey blank wall. The auditorium is awash in technological clicks and buzzes and soundscapes that surround the audience, from a busy New York street to a helicopter that sounds like it is circling the auditorium on takeoff.

The cast bow opening night should have included scenic designer Anne Mundell, lighting designer Paul Black with his precise snap lighting, sound designer Marty Mets, costume designer Robin L. McGee (with period perfect clothing that will embarrass audience members with memories), wig designer Gerard Kelly, and above all, Brad Peterson, whose projections set a new standard for the region. It’s a prime example of why we have been lobbying the Carbonells for a new award category for projection designers who often just get a thank you in acceptance speeches by scenic designers.

The rest of the cast is dead on as well, starting with the narrators Wayne LeGette as Reston and Jim Ballard as Nixon’s ramrod chief of staff, plus Greg Jackson as Frost’s producer, Vanessa Morosco as his current girlfriend, and Kenneth Kay as adviser Bob Zelnick. Also on board, some in multiple roles are Armando Acevedo, Vincent Bolchoz, Daniel Kies, Gretchen Porro, Dave Scotti and Robert Scruggs.

The Maltz under Producing Artistic Director Andrew Kato keeps gently pushing at the comfort level of its audience with straight plays with serious messages. Next season, it will mount the powerful and upsetting Pulitzer winner Disgraced, which starred Acevedo at GableStage last year. These shows are not going to be popular with large swaths of its core audience, but the Maltz’s considerable skill and resources make those of us who love such work to be grateful for their courage and taste.