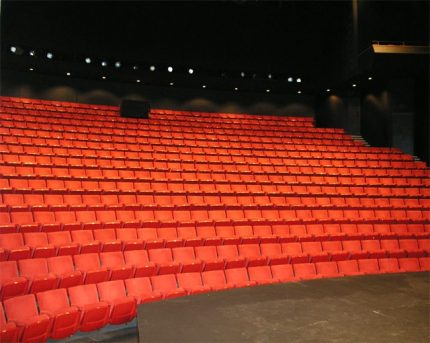 One of the most character-defining lines in Norman Shabel’s A Class Act, running through this weekend at JCAT in Miami, is spoken by Phil Alessi, the lead prosecuting attorney in a potential class-action suit against a chemical giant. Played with effortless alpha-male gusto by Seth Trucks, he offers this rejoinder against going to trial: “For the right money, I’d settle with Hitler.”

This provocation isn’t the least bit shocking to his colleagues on the case, Ben Donaldson (Devon Dassaw) and Frank Warsaw (usually Adam Crain, played in last Sunday’s performance by Stephen Kaiser), because they are of the same rapacious breed of lawyer—and they’re the good guys in this narrative. But the line stands out as much as it does because Shabel’s virtuous play and JCAT’s heavy-handed production are otherwise absent this moral slipperiness, favoring a reductive arc of cardboard villains earning their comeuppance.

They are represented by John Dubliner (Kerry Weinberg) and Edward Duchamp (Kevin Reilly), upper-management suits from a fictional chemical conglomerate referred to simply as General; and their two attorneys, Ignatio Perez (Jesus Reyna) and Dorothy Pilsner (Linda Drozdow). Much of the action in A Class Act takes place around a conference table, each side presenting its terms for a potential settlement. The issue at hand concerns the discovery of General’s toxic PFOs in drinking water.

The prosecutors believe they have a rock-solid case for a national class-action lawsuit representing Americans harmed by General’s cancer-causing contaminants. After all, the company recently paid $200 million to settle a similar suit in California alone, and that was before a damning EPA report landed like a godsend in prosecutors’ laps. For their part, Dubliner and Duchamp are willing to unearth whatever dirt they can find about their rival’s personal lives to muddy the waters (so to speak), even if it means using their attractive counselor Pilsner as a sort of bait.

Though it premiered off-Broadway in 2016, Shabel’s play already feels dated, covering much of the same ground as films like A Civil Action, Erin Brockovich and, most recently, the Mark Ruffalo vehicle Dark Waters. It is populated by stock characters that director Stephen Kaiser’s ensemble largely fails to inject with much vibrancy (Trucks is the notable exception).

Perez, as the one defense lawyer arguing against the blackmail tactics of his clients, comes across as a naïve relic from an earlier time, pounding his fist on the conference table in quaint outrage. Drozdow, whose Dorothy Pilsner emerges as the play’s most pivotal character, never embodies the sharklike legal warrior that should cause her rivals to quake in their polished shoes. Rather, hers is a timid performance undercut by too many flubbed lines and a third-act twist that falls emotionally flat. Kaiser, pinch-hitting in the role of junior lawyer Warsaw, is certainly too old for the part, with the many references to his youth and inexperience ringing false.

More consequential are some of Kaiser’s leaden directorial decisions, which are more on-the-nose than COVID swabs. To accentuate the devilishness of the play’s antagonists, the stage is bathed in a crimson glow as they conspire, and the amount of red in their costumes underlines their Mephistophelean tactics.

Rather then let some of the show’s more substantive monologues play out naturally, Kaiser plants his actors at the lip of the stage, addressing the audience and taking us out of the diegesis, a gambit that’s never clunkier than in Duchamp’s purple harangue in defense of General’s death-causing decision-making. Reilly comes across so much the Big Pharma cartoon that he ought to be animated.

Most of the technical elements of JCAT’s production are serviceable or better. Martin Sipicki’s projected backdrops properly place us in parks, back alleys and a swanky rooftop restaurant, supplemented by ambient birdsong and other city noises. Grainy video of animals sickened by chemicals makes for an immersive complement to a character’s description of viewing such caustic evidence.

But the virtue signaling is ultimately a bit much. There’s already enough of it in Shabel’s earnest play; we didn’t need Kaiser’s extra seasoning.

This entry was posted in Performances, Reviews and tagged A Class Act, JCAT. Bookmark the permalink.