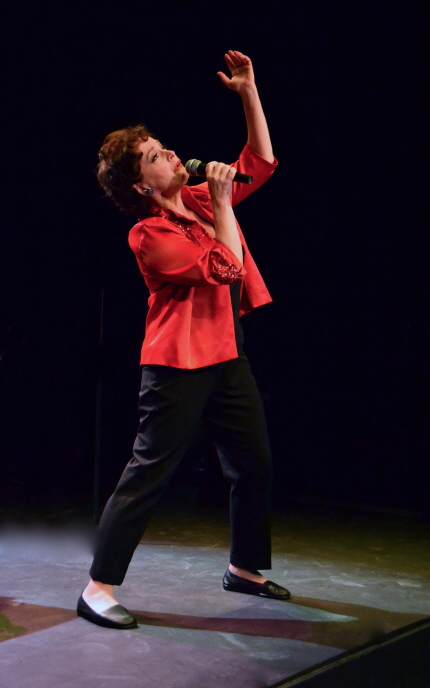 Jody Briskey as the diva in  Beyond the Rainbow: Garland at Carnegie Hall / Photo by Amy Pasquantonio

There’s no room for missteps at the intimate Theatre at Arts Garage cabaret. In this production of Beyond the Rainbow: Garland at Carnegie Hall everything is up close and very personal in a creatively re-imagined staging of the show.

Usually performed in proscenium (it was staged proscenium style at the East Coast premiere of the play at Florida Stage in 2006), director Ron Paluso has reconfigured much of Rainbow to take place level with the audience in different areas of the cabaret. The stage is mostly used for Judy’s Carnegie Hall performance. So, the intention is to put the audience in the middle of the action. It is creatively done and makes for a heightened theater experience.

The show, written by William Randall Beard, and commissioned in 2005 by the History Theatre of Minnesota, uses Garland’s landmark April 23, 1961 Carnegie Hall concert as a jumping-off point to tell the story of little Frances Gumm from Grand Rapids, Minn., all the way up to that fabled performance.  History Theatre’s mission is to tell stories of Minnesota, the Midwest and the American experience.

The cast, too, is from Minnesota’s History Theatre including Jody Briskey as Garland at Carnegie Hall; Norah Long as a younger Judy, with Clark A. Cruikshank, Peter Moore and Peggy O’Connell in an assortment of roles.

Beard uses the Carnegie Hall concert and the songs as a technique to create a memory play – Judy (Briskey) sings songs that provoke past memories with her younger mirror Frances who progressively ages throughout the show to a thirtysomething Judy (Long). The younger Judy recreates days with the Gumm Sisters, the casting of The Wizard of Oz, the Andy Rooney movie era, and other bits and pieces leading  up to her Oscar nomination for the 1954 A Star is Born.

Peluso reserves three tables within the cabaret where much of the action takes place – a table smack dab in the middle is home base for the young Judy and, at times, the more mature Judy — sometimes the two are looking at each other here, a poignant mirror. A table close to the rear of the theater doubles as Louis B. Mayer’s desk and also hosts Sid Luft. A table towards the front, and at right, is where Judy’s mother and Hopper (O’Connell who gets a laugh each entrance with some of the most outrageous hats), play out many scenes.

There’s not much revealed in the script that isn’t already known in Garland’s iconic life: the pills, the drinking, the difficult relationship with her mother and with studio exec Mayer, her attraction to unavailable men, suicide attempts, and so on and so on. Perhaps it might not feel so original if not seen in this experiential setting, but being part of the action makes it real, just a bit rawer. When Judy says: “No one loves you the way the audience does,” you do love her, you really do.

Briskey, who looks like a cross between Garland and Liza Minnelli, captures the ticks and idiosyncrasies of the singer circa 1961, plus she’s got the voice. While the first act shares songs and behind-the-scenes stories equally, the second act focuses more on the concert performance, allowing an opportunity for Briskey to show her stuff.  In a few of the numbers, the talented vocalist holds notes for what seems like an infinity, each time eliciting deserved applause from the captivated audience.  Briskey’s interpretation of Garland (much the way Tracie Bennett approached the role in the incredible End of the Rainbow recently on Broadway) is just that — not so much an impersonation, which gives it dimension instead of drag-queen parody.

Long as the younger Judy has the heady task of playing the star from a little girl in pigtails to a suicidal pill addict in her 30s. To her credit, Long is able to convey the character’s time travel convincingly as we watch the progression, especially magical since many of young Judy’s scenes are smack dab in the middle of the audience. (A side note: At the beginning of the second act, Long wears a black, spiky haired wig. It’s confusing since many in the audience thought that she was a grown up Liza Minnelli; it took a minute to get reoriented that she was adult Judy.)
The supporting cast is spot on and are all masters of characterization as they leap believably from one role to another.

The band includes musical director and pianist Jimmy Martin. Pay attention to Davie Wilkinson’s stand-up bass playing; it’s worth it to take your eyes off the main action for a minute to experience this. Tom Jaworski plays an assortment of reeds, and Julie Jacobs keeps the beat on the drums.

The tunes are all recognizable, which went a long way with the opening night older crowd at Arts Garage. There’s even a sing along of Me and My Gal. Of course, the grand finale is Over the Rainbow, of which Briskey gave one of those performances that zings at every heartstring. An extra encore song, San Francisco, which was uncredited in the program, seemed to burst the end of the show’s high note. After Rainbow, what more could you want?

This entry was posted in Performances, Reviews and tagged Beyond the Rainbow: Garland at Carnegie Hall, Judy Garland, Theatre At Arts Garage. Bookmark the permalink.