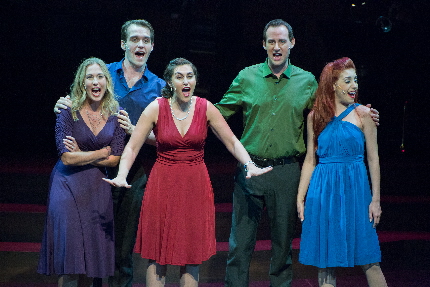 There are words that, through overuse or being employed bluntly or sloppily, lose their ability to conjure the depth, vibrancy and complexity that the verb or noun harbors.

A redeeming virtue of musical theater is its ability through the alchemical mixture of syllables and notes to reclaim the almost tactile viscera contained in words like “heart.”

For that’s what MNM Productions at the Kravis Center does in its superb revival of the Kander and Ebb revue The World Goes Round. It takes us on a detailed tour of the landscape of the human heart, not just the joyful peaks or the crippling abysses, but the winding trails through murky wilderness.

A golden-voiced quintet of performers and skilled sextet in the on-stage band are our surrogates as the veteran Broadway composer and lyricist lead us on that tour with an incisive but deeply compassionate commentary pointing out confusing alloys of highs and lows, ambivalence, confusion, lust, love, regret, celebration and a dozen recognizable but less-defined states.

When it comes to plotless musical revues, it doesn’t get much better than this example helmed by director Bruce Linser, musical director Paul Reekie and choreographer Kimberly Dawn Smith.

Most people know composer John Kander and the late lyricist Fred Ebb for Cabaret and Chicago, and while World provides the required iconic songs from their catalog, it takes great pleasure in its 30-song list in unearthing lesser-known gems drawn from theater geek favorites like The Act, The Rink, Zorba and The Happy Time.

The styles range from the brassy “All That Jazz” to the vaudevillian “The Grass Is Always Greener” to the delicate “A Quiet Thing.” If there is a unifying through line, it might be the yin-and-yang vagaries of love. The 1991 show conceived by director Scott Ellis, choreographer Susan Stroman and librettist David Thompson creates mashups in which relationships are breaking up as often as they are coming together, where someone might still be in love with someone who is now in love with someone else.

For instance, Shelley Keelor opens one section by caressing “Only Love,” the loveliest song from Zorba, followed without a pause by Michael Scott Ross’ impassioned plea “Marry Me” from The Rink, segueing immediately into Leah Sessa’s “A Quiet Thing,” then a lovely dance break with Sessa and Ross, and then a warm affirming melding of the two with “Marry Me” and “A Quiet Thing.”

Just as strong is an intertwining of Clay Cartland’s plea for reconciliation “We Can Make It” from The Rink, followed by Sessa’s “Maybe This Time” from the film version of Cabaret, and Keelor’s “Isn’t It Better” from the Funny Girl sequel Funny Lady, once again all mixed at the end. It reminds us that all around us, love stories are ongoing simultaneously at different stages with different colors.

Since these songs have been rearranged so that they are not nostalgic copies of the original cast albums, these songs feel fresh. For instance, “Cabaret,” the most misunderstood taken-out-of-context song in musical theater, is transformed into a cool jazz number a la the Manhattan Transfer with airtight chorale harmonies.

The most obvious asset is this cast, which has a reasonably decent chemistry, but is comprised of fine actors blessed with fine voices. They, with Linser and Reekie, dissect the bodies of these songs line by line until they find that heart and deliver it so that you’re not watching a cabaret-style greatest hits show. They are performing character-revealing monologues in music and stories with a plot arc.

Just as with MNM’s Side by Side by Sondheim a year ago, there are renditions of classics and near-standards that arguably are the best, or at least among the best, that these ears have heard. 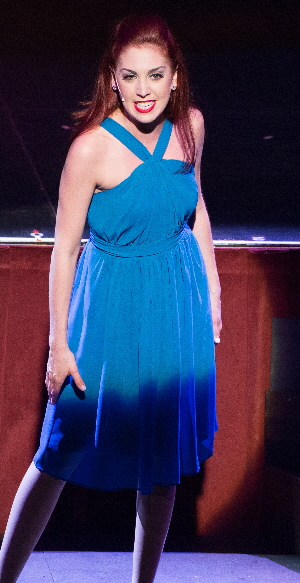 It has been a pleasure watching Sessa’s talent grow and deepen over the years until she has become someone who reliably delivers lyrics and a melody with a profound pungency.  For instance, the aforementioned “A Quiet Thing” is a cult favorite song about the poignant joys of true love that introduced audiences to Liza Minnelli in Flora The Red Menace. Usually, it doesn’t land solidly no matter the singer. But in Sessa’s hands, it has never been more effective and moving. And her electric show-stopping “Maybe This Time” is (is this possible?) better, more heartfelt without being needy, than Minnelli’s. Yet she can steam the place up with a sexy in-your-face “All That Jazz.” 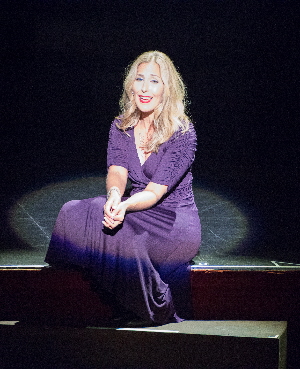 Keelor. Damn. Keelor took some time off to raise a child after working around the country and only recently returned to Florida stages and concert venues with such turns as the heroine’s mother in Slow Burn’s Carrie.  But in MNM’s Sondheim with Linser and Reekie, she gave renditions of “I’m Still Here” and “Send in the Clowns” that were revelations. She does it again here, song after song with a pure liquid voice that effortlessly wrenches out the marrow of a song’s meaning and emotion, all with an actress’ storytelling chops such as in “Colored Lights.”

Jinon Deeb, who was in MNM’s Hair and soon will be in Slow Burn’s Hunchback of Notre Dame, is not well-known locally, but she nails everything she’s offered including the bluesy opening title number. Her rendition of “My Coloring Book” is peerless and yet does not have a shred of Streisand. Bet on seeing a lot more of her in coming seasons.

Ross is the New York Equity ringer who scored as Claude in MNM’s Hair. Once again, he shows here a skill at shuttling between comedy like “Sara Lee” and heartfelt passion as in “Marry Me.”

And Cartland, as always, brings a singular energy and commitment to portraying the emotion driving a song whether it’s the poignant plea “We Can Make It” or the conflicted “I Don’t Remember You” or the acerbic angry “Kiss of the Spider Woman.” He often makes his way into the front section of the audience who have paid extra to sit at tables in order to read their program or take a selfie with them.

All these performances are molded into a single musical style by Reekie who also leads a terrific band including Sandi Hagood on percussion, Rick Kissinger on reeds, Douglas Michels on muted trumpet and the venerable Dave Wilkinson on stand-up bass. Some companies cheap out by omitting the trumpet and reeds, but they are an integral part of the heartfelt wail that Kander intended. 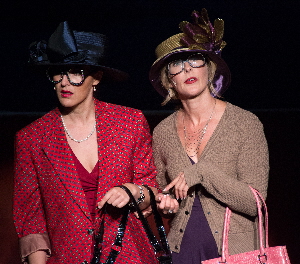 Linser keeps everything moving steadily while insisting that the cast dig ever deeper into their souls to power their performances. It’s hard to remember the staging from earlier productions but he has some very funny bits, especially having Keelor and Deeb wander in from the back of the house as a couple of Brooklyn housewives talking over the ongoing production number on stage, loudly crackling candy wrapper and answering a cellphone mid-performance and chatting away for a minute with the caller while singing “Class” from “Chicago.” For the “Colored Lights” number, young Olivia Rose Chiampou roller skates around Keelor as the embodiment of her reveries of her childhood.

World is a popular staple of regional theater because, besides the material, it’s inexpensive to produce with a small cast, a single set and simple costumes. Back in 1998, South Florida hosted three competing productions in less than a month. But MNM – a relatively new company formed by Marcie Gorman Althof and Michael Lifshitz –  has proven with such shows as its Carbonell-nominated Side by Side by Sondheim that it has a talent for productions that have subtle polish and precision.  The company, which has moved around various venues, seems to have settled in at the Rinker, a notoriously difficult space to conquer. But with Hair last spring and now World, they seem to have a handle on it. One reason is that the quality of the Kenny Reiss ‘ sound – the clarity, the brightness, the balance – is exemplary. While its settings are simple – a backdrop – Jayson Tomasheski takes advantage of the space’s lighting equipment to keep each tableau seeming a new location or emotional tone.

MNM’s The World Go Round is entertaining enough that it actually is worth a second go round.

The World Goes Round runs through August 21 at the Rinker Playhouse at the Kravis Center for the Performing Arts, 701 Okeechobee Boulevard, West Palm Beach. Running time: 2 hours 15 minutes including one intermission. Performances are 7:30 p.m. Thursday-Saturday; 1:30 p.m. Saturday and Sunday. Tickets are $45-$60 (top end is for table seating).  For more information, call (561) 832-7469 or visit kravis.org.