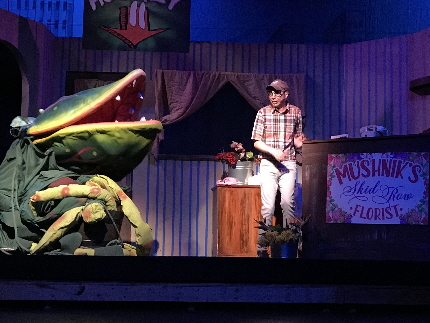 Lightning Bolt Productions, a fledgling company in Boca Raton, delivers yet another merry recreation of one of the most amusing small musicals in the canon: an intentionally silly, unapologetically unsubtle hoot. If you haven’t seen in it in a while or, hard to believe, haven’t seen it at all, Lightning Bolt’s ebullient edition is a perfect reason to visit or re-visit Skid Row.

Hewing to an “if it ain’t broke, don’t fix it” approach, Lightning Bolt brings together endearingly comic characterizations, strong expressive voices and a clear joy that emanates from a cast whose enthusiasm is nearly impossible to resist.

The elephant in the auditorium is that this is the fourth professional production of the work in South Florida we’ve reviewed in six years, the second in nine months in Palm Beach County. And it’s done annually throughout this part of the state by community theaters, colleges and high schools. Remember the 2003 pre-Broadway tryout at Actors Playhouse in which virtually everyone in the show but the lead was replaced, even the director?

As good as the raw material is, it requires talented artists to pull off that tone. Lightning Bolt has precisely that, starting with company co-founders Andrew Shultz and Jessie Hoffman portraying the uber-schlub Seymour and adorable victimized Audrey. They fearlessly inhabit the cartoonish parts and invest a slightly different topspin to the iconic characterizations, thereby giving the show a bit of freshness.

Shultz’s hangdog expressions, his “little guy” Everyman persona, lithe body language and Broadway belter voice channeled through Brooklyn are perfect. But Hoffman is just as solid as the kewpie doll with a childlike voice. Her rendition of “Somewhere That’s Green,” while as funny as it is meant to be, is also as touching as it ever could be with her wistful yearning for a dream so heart-breakingly modest.

Amazingly, Shultz has doubled as the production’s director and Hoffman as assistant director. Anyone from Laurence Olivier to David Arisco who has done such double duty can tell you what a challenge that is. But Shultz’s staging is unassailable. He gets droll comic performances out of the entire cast and he keeps the show flowing as quickly and smoothly as any we’ve seen. He and his cast toss in their own inventive bits of business as well, such as when Seymour is comforting a crying Audrey on a stoop, he pulls some old toilet paper out of a nearby trash can so she can wipe her eyes. Earlier, the “Mushnik and Son” tango with a distinct klezmer overtone ends with the two dancing a hora.

Jonathan Cabrera takes scenery-chomping permission to go over the top as Orin, the sadistic wannabe Marlon-Elvis dentist with a fetish for nipple twisting and who wields an ancient Home Depot electric drill for dental work.  His manic preening villain may get a little out of hand, but the opening night crowd was in hysterics over his antics.

Veteran Peter Librach enjoys his third shot at the role of the irascible mercurial shop owner Mr. Mushnik, and his comfort is like watching someone slip on an old glove. Librach who has played Tevye before also slips in some “If I Were A Rich Man” moves into his musical numbers.

Often in productions one of the three street urchins serving as hard-working Greek chorus has a weaker, poorer voice than her sisters. But in this case Alexis Robinson, Annaya Osborne and Sorangel Munoz are equally strong legs of the tripod.

Chase Stante has the right muscular basement baritone for Audrey II, but he gives his line readings with that extra fillip of attitude and sass of a ghetto street dealer coming upon a couple of white high school kids who wandered away from their prom. Charles Herrick also on his third tour of duty builds up a sweat as the puppeteer inside the killer plant. Filling out the scene are Paul Kane, Richard Cooper and Joanne Shultz as the delightfully disgusting winos.

Expert music director David Nagy sculpted the voices and appears to have tweaked the pre-recorded music to allow the actors to phrase the songs with emotive pauses and delays. Alissa Kane did the choreography including a surprise conga line with drunks.

A shoutout is due sound designer/engineer Traci Watkins and whoever else responsible at the West Boca Performing Arts Theater for finally conquering the sound problems that have crippled scores of shows at what is actually the auditorium for West Boca Community High School.

Some theaters like the Maltz Jupiter Theatre deconstruct musicals to make them fresh. But Little Shop is what it is. And if you like what it is – if you can sing along the lyrics and anticipate the lines – this is a rewarding outing.