Maltz’s Vaudevillian Farce of The 39 Steps Runs On Laughter

Posted on November 4, 2011 by Bill Hirschman 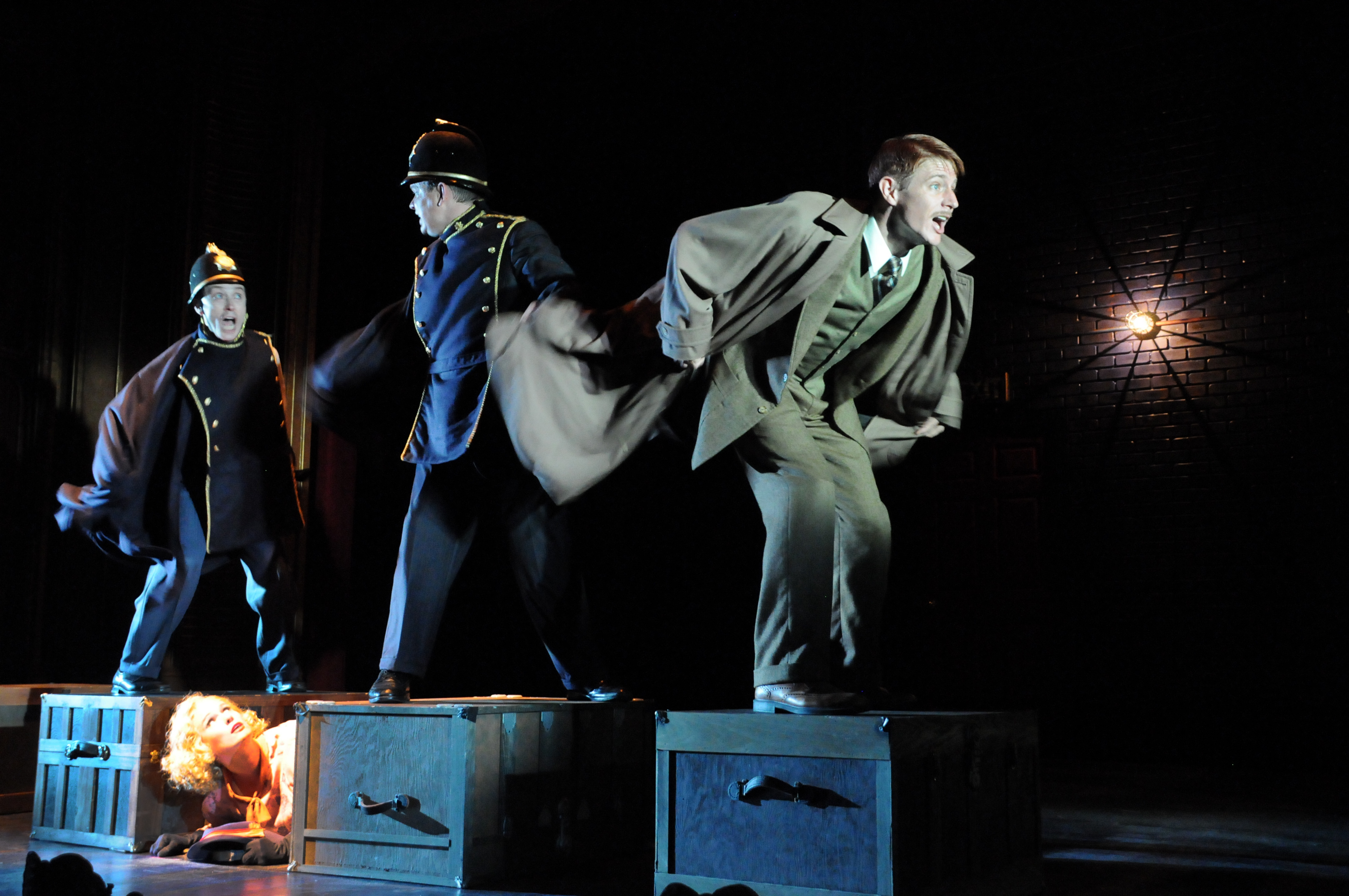 There’s one scene of simple stagecraft in Alfred Hitchcock’s The 39 Steps (the farce not the film) that never fails no matter how many times you’ve seen it.

The dauntless hero Richard Hannay is being chased by villains outside the European passenger cars on a speeding railway train represented by nothing by a line of four trunks, plus lights and sound effects. When Hannay and the bad guys step outside the compartment, they shake the ends of their overcoats as if the passing wind is furiously tearing at their bodies.

You simultaneously guffaw at its intentional cheesiness and yet are open-mouthed at how evocative inventive theatricality can be.

The current production at the Maltz Jupiter Theatre is blessed with a steady procession of sight gags, puns, pratfalls and vaudevillian humor all delivered with enough energy and skill to keep a satisfied grin on your face much of the night.

Although it’s lushly-mounted, ingeniously directed and acted with the appropriate tongue-in-cheek, the edition doesn’t exactly send you into non-stop paroxysms of laughter as the exquisitely-tuned Broadway version did several seasons back.

Perhaps, the measured praise is due to the fact that this is at least the fourth time I’ve seen the show. (The 39 Steps is one of the most produced plays in regional theater right now.) Each time, I’ve felt regressively less enchanted. It’s why magicians don’t repeat tricks in front of the same audience; it doesn’t seem like magic anymore no matter how well it’s executed. None of which takes away from the entertaining work on stage at the Maltz.

The play is drawn from Hitchcock’s classic 1935 wry thriller/romantic comedy, as opposed to the 1915 dead-ahead adventure story by novelist John Buchan of the H. Rider Haggard school. Playwright Patrick Barlow (and original director Maria Aitken) took Hitchcock’s humor another step and spoofed the genre’s clichés by supposing that a third-rate troupe in the provinces of England was putting on a fourth-rate production with virtually no resources.

Barlow and Aitken created both a door-slamming farce and an affectionate tribute to the English music hall tradition, meaning the unabashed artifice of cheesy theatricality. A key element is that, other than the actor playing Hannay, the scores of other parts are played by one woman (three and a half roles) and two “clowns” who seamlessly switch in and out of multiple characters and costumes off stage within a few seconds, sometimes even on stage in front of the audience.

The fictional troupe makes do with bare bones scenery: a few streamer trunks, two A-frame stepladders, an easy chair, a stand-alone door and an empty window frame – and the whole thing on rollers for smooth cinematic scene changes.

But they’re armed with a bottomless trunk of outlandish costumes, jerry-rigged props, dozens of wigs, a malfunctioning smoke machine, swelling musical chords to accent double-takes, hundreds of sound effects (including a cow mooing in the middle of London) and thick stereotypical accents. When the cast was soaking in the applause at the final curtain, backstage helpers Leslye Menshouse, Leonard Gold and others should have taken a bow as well.

The plot, which not even Hitchcock thought mattered, presents us Hannay (Christian Pedersen), a dashing debonair young hero who stumbles onto a spy ring smuggling Defense Ministry secrets out of the country in preparation of what will be World War II. Hannay, the prototypical Innocent Everyman Caught Up In Major Events And Forced On The Run, is being pursued by the bad guys and the police who think he murdered a beautiful spy in his room (Beth Hylton). He is betrayed by and then aided by another beautiful woman (also Beth Hylton) during a chase across Scotland with the chameleonic clowns (Joe Foust and Andrew Sellon) in close pursuit.

This is director Peter Amster’s fourth run at the show and he reliably paces the festivities. While a goodly portion of the staging looks familiar, Amster and company have layered on scores and scores of unique and inventive bits of business. For instance, as the train travels, we see signs of stations passing by until they reach one that says, “Edinburrrgh.”

This edition has also added a few dozen lines to expand on a running joke. In the original script, there were two lines containing a punny reference to a Hitchcock film title. Here, they do it 20 times – and each groaner is as delightfully silly as the next. I think one line was “Beyond a shadow of a doubt, the man who knew too much was above suspicion.” That’s three, right there.

The shoddiness of the supposed incompetent production is underscored by another running joke in which the sound and light crew constantly miss their cues, such as a phone that keeps ringing after it’s picked up. Of course, this means the real stage manager, sound and light crew have to work overtime to “miss” their cues.

Being the Maltz, the creative team’s work is, as usual, first-rate. Linda Buchanan’s deceptively simple scenery is framed by an ornate gilt-edged musical hall proscenium (actually repurposed from Timothy Mackabee’s set for last season’s Jolson at the Winter Garden) adorned with lush red curtain with gold trim (some made at the Maltz and a show curtain borrowed from the Cleveland Playhouse) and two sturdy sets of box seats. Kudos are also due to costumes designer Tracy Dorman, lighting designer Michael Lincoln, music and sound designer Victoria Deororio, wig designer Gerard Kelly and production stage manager Brandy Demil who keeps the chaos under control.

Again, too much familiarity with the show may breed discontent, but first and second timers will enjoy an entertaining diverting show that aspires to nothing more than that.