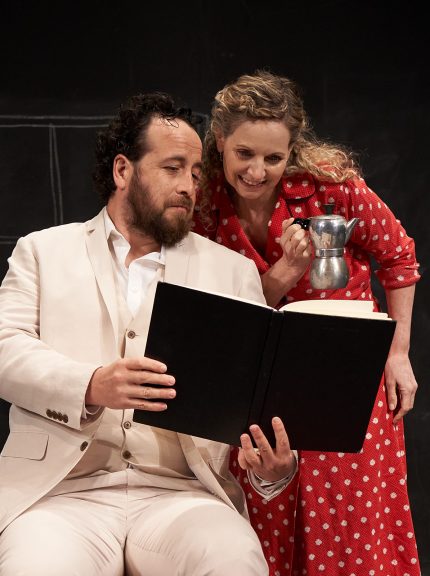 What better way to mark the return of live, in-person theater than to celebrate the major role that an audience’s imagination plays in this unique art form?

All the companies are asking in return is that audiences use their imagination – and let theater artists Ana Graham and Antonio Vega, at their best, do the rest.
Graham and Vega last captivated audiences in 2017. That is when they first brought their winning production of A Special Day to MIND.

Now, a couple months before MIND opens its 2021-22 season, (see sidebar at the end of this story), the company has brought back A Special Day to its home venue, Miami Beach’s Colony Theatre, as a gift to theatergoers. The show runs through Oct. 17 at MIND.

The nonprofit Por Piedad Teatro’s production is, well, special. That’s partly because Graham and Vega transport us to pre-World War II Italy with minimal props and scenery. Not only that, they both “create” props such as a parrot’s cage and a window. They do this by drawing them with chalk onto the set’s board. It’s a blank canvas…with unlimited possibilities.

The touching and uplifting film is in Italian with English subtitles. Meanwhile, Graham and Vega present the equally moving, funny, and invigorating play entirely in English.

Specifically, Por Piedad Teatro’s faithful play adaptation, like the film, takes place on May 8, 1938. During this dark day in history, Adolf Hitler visited Benito Mussolini to celebrate the country’s rise of fascism. However, the two characters, Antonietta and Gabriele, decide to stay home while Antonietta’s family attends a celebratory parade. But instead of worrying about the future together, the pair escape reality for the day by mindfully engaging in life’s simple pleasures – a cup of coffee, conversation, camaraderie and chasing Gabriele’s talking parrot, which seems bent on escaping.

While the pair quickly warms up to each other, their day together is not all pleasant. In fact, as human begins with all their flaws and warts are at times prone to do, the characters argue and even physically struggle. Also, Gabriele reveals a secret that could endanger his life in Fascist Italy. But in the end, the couple mostly enjoyed each other’s company, spending together a day that is special in its ordinariness.

The film and the stage play, by highlighting life’s simple, ordinary pleasures, might call to mind playwright Thornton Wilder. Certainly, the bare bones set, at least in the beginning, could remind folks of Our Town. Indeed, when we enter the theater, there is no curtain. And the only set pieces we see are chairs resting upside down on a table upstage.

In Brechtian style, the couple enter and ask us to imagine that we’re in 1930’s Italy. The set’s wall becomes a chalk board onto which the performers draw props. For instance, Gabriele draws a hook for hanging clothes onto the board. Immediately after, he hangs his hat on it – and, magically, the hat sticks.

At one point, someone rings the doorbell. Clearly, however, Gabriele makes the sound of a doorbell with his mouth. Gabriele also pretends to be his new friend’s talking parrot. We clearly see Vega cover his face as he talks like a bird or makes the sound of a doorbell. But even though the stage magic is visible, we buy into the make-believe world on stage. Perhaps that is because using our imagination reminds us of how we played “make believe” as children. Also, we can’t resist buying into the world onstage because the performers inhabit it with contagious enthusiasm and energy. This is the kind of minimalist, yet magical theater that would probably impress someone like Giancarlo Rodaz, the visionary, imaginative associate artistic director of Miami’s Area Stage Company.

The performers in this production prove to be double threats – they can draw and they certainly can act. The pair disappear into their characters, with each of them playing more than one person.

Meanwhile, Graham imbues Gabriele with charm, and a general zest for life that endears us to the character. Also, like Vega, Graham convincingly turns up the heat when her character becomes frustrated at Gabriele’s advances. And the actors, who directed themselves, display good chemistry between them. The pace is lively and just right – not too fast, not too slow.

The performers wear light clothing – a yellowish suit for Vega and a red polka-dotted dress for Graham, befitting their lively, bright personalities. These colors contrast nicely with the simple set’s black and grey. They reinforce the day’s darkness as Hitler visits Mussolini.

Certainly, when the bold and daring five-year-old MIND presented A Special Day in 2017, it was a relevant piece. Indeed, with the Trump administration in the White House, many people panicked about the country’s future. But somehow, these people had to get through each day, possibly using mindfulness techniques similar to what this show’s characters use.

Today, in the midst of a pandemic, A Special Day is even more relevant. As folks fight through loneliness and anxiety about uncertainty, the importance of coping mechanisms to get through each day is even more important.

Ultimately, A Special Day is not just an escape from our concerns, but a reminder to be hopeful in a world where hope sometimes seems impossible.

A Special Day continues through Oct. 17 at The Colony Theatre, the home venue of MIND, 1040 Lincoln Road in Miami Beach. While performances are free, MIND is requiring reservations. The box office is open from 11 a.m. to 5 p.m. Tuesday through Sunday. Call (305) 674-1040.

COVID protocol: Patrons, students, teachers, and Miami New Drama staff must wear a mask at all times during performances, classes, and rehearsals. Individuals can bring their own mask or a mask will be provided.

The shows comprising Miami New Drama’s (MIND) 2021-22 season share at least one thing in common: They will all make their world premiere when they take MIND’s stage.

The season of all world premieres will open on Dec. 4 and will continue through the late spring.

To begin with, the pandemic-delayed bio-musical A Wonderful World, about Louis Armstrong’s life, will finally take the stage on Dec. 4.  The musical, with a book by Aurin Squire and arrangements by Michael O. Mitchell and Annastasia Victory, will run through Jan. 16.

Next up, MIND will stage the world-premiere of When Monica Met Hillary, by Winter Miller. And yes, the play is about that Monica and that Hillary. It’s described as  “Girl meets boss. Girl falls for boss. Girl loses everything. A First Lady breaks the glass ceiling, only to find another. Monica and Hillary have never met. Until now.” (Feb. 17-March 13).

A new musical will close out MIND’s season in late Spring. MIND will late reveal the specific dates for Papa Cuatro. “Witness history and join in the music that endured countless generations,” reads a description of the show. Juan Souki conceived and will direct the show, with original music by C4 Trio.