More Than One Kind of Miracle: The Wick’s Lovely Brigadoon 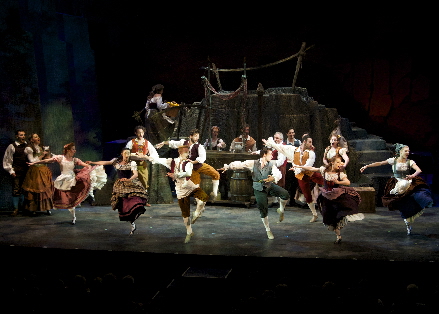 Graced with a soaring pulsing score, leading actors with passionate voices and a wealth of evocative choreography, the Wick Theatre’s Brigadoon lands as one of the company’s most memorable achievements.

The few shortcomings in this winning production evaporate in the virtues of this warm romantic first success from Alan Jay Lerner and Frederick Loewe, celebrating the 71st anniversary of its Broadway opening March 13.

Rarely-revived even in regional theaters, Brigadoon is better known for the significantly altered 1954 film that gave Gene Kelly and Cyd Charisse extensive dance duets that do not exist in the musical.

The 1947 original material, while very much of its era, is solidly wrought, especially since it was written only four years after the ramped-up standards of integrating song and story in Oklahoma and two years after Carousel.

But Brigadoon atypically counters its bouncy peppy feel with an ever-darkening ambience in which a sophisticated urbanite struggles with an inbred societal cynicism that blinds him to the promise of pure abiding love.

The story – now set in 2018 – finds New Yorkers hunky Tommy Albright (Matthew Taylor with a very 21st Century appearance) and cynical Jeff Douglas (Wayne LeGette) lost in the highlands unable to get Google maps to work on their Ipad and unable to get a single bar on their cellphones.

They stumble on the quaint titular village where the denizens are dressed in brand new but period costumes like they were going to a Ren-Fest. They are holding a market day and preparing for this evening’s wedding of the infectiously ebullient Charlie Darymple (Adam Machart) to comely Jean MacLaren (Alexandra Van Hasselt). The prospect has curdled the brooding soul of a rejected beau Harry Beaton (Christopher Brand).

Tommy is instantly smitten with the lovely Fiona MacLaren (Lauren Weinberg) who is older than her sister but willing to wait for the right man. Tommy becomes enchanted not just with the spirited Fiona but the Edenic town itself that seems to have been frozen in time.

Indeed, no spoiler alert needed, Brigadoon was blessed 200 years ago to protect it from the evils of the outside world by a miracle that allows it to appear one day every 100 years. To the villagers, this is just the second day since they first went sleep.

Jeff is not just skeptical of this seeming hallucination but he tries to bring Tommy to his senses. Although Tommy and Fiona are deeply in love by mid-show –happily surprised themselves at the speed it occurred—Jeff begins to make inroads in Tommy’s crucial belief in the legend that he can stay if he loves Fiona.

It all reaches a first-act crisis when the profoundly disaffected Harry tries to escape the village – something that would cause the town to vanish forever.

Director Jeffrey B. Moss has staged the show expertly and elicited – ever deepening passions from Taylor and Weinberg, but it’s musical director Caryl Fantel who has coaxed glorious sounds from their throats and melded the chorale work from the ensemble. 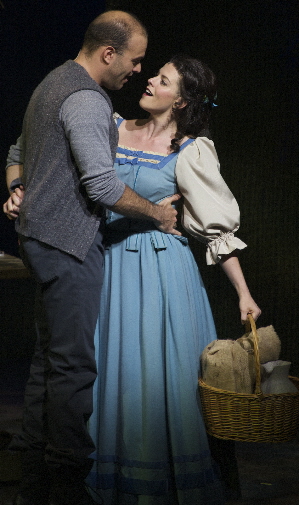 Taylor takes a little while to warm up to his character, but once he begins to romance Weinberg’s Fiona with that high baritone, he unleashes the released romantic in Tommy with a wonderful abandon illustrated through such classics as “The Heather on The Hill” and “There But For You Go I.”

Weinberg is even more amazing. She earned unstinting praise in recent Wick productions as the daffy Adelaide in Guys and Dolls and the flirty Ilona in She Loves Me. Neither comedy-based role prepares the audience for her sublimely soaring soprano in the aforementioned answering duets with Taylor such as the ecstatic “It’s Almost Like Being In Love,” plus  “Waiting For My Dearie” and the emotionally-fraught reprises as Tommy’s resolve falters. Fiona is an underwritten role but Weinberg and Moss invent and invest Fiona with a gentle defiance at the social expectations of her society but an unfettered courageous commitment to this chance at love that is as miraculous as Brigadoon’s own fate.

Among the supporting cast, veteran LeGette gets little chance to show off his pipes but he makes an impression as the disbelieving Jeff; slender Mychal Phillips has the comic role of town flirt Meg Brockie who gets to let go in “My Mother’s Wedding Day.” Mahart lets loose a buoyant Irish tenor in “”I’ll Go Home With Bonnie Jean,” and the tender “Come to Me, Bend to Me.” Brand exudes Harry’s barely banked toxic anger as he leads the wedding’s celebratory Sword Dance with the storm clouds approaching.

Other familiar locals include Oscar Cheda as the schoolmaster Mr. Lundie and Troy J. Stanley. Opening night, Harry’s father was played by Peter Librach but an accident sidelined him and the part is being played by Michael Walters.

But the unsung heroine of the production is Lindsay Bell’s choreography. Brigadoon followed close on Agnes DeMille’s acclaimed work on Oklahoma and Carousel, both of which featured a character-revealing ballet. So the producers gave DeMille free rein to create in this show, dances that were evocative but would seem a bit too prolific for a 21st Century audience that just wants to narrative drive to carry on.

But Bell, a dancer who stands out in any ensemble, is equal to the challenge with frequent interludes of spirited faux folk dancing melded with ballet moves, lifts and Broadway chorus line tropes. Her two finest moments are when dancers Steven Del Col and Daniella Tamasi stand in for Charlie and Jean separated before their wedding singing of their love in the lilting “Come to Me, Bend to Me.” The second is an Martha Graham-like solo exquisitely executed by Elizabeth Troxler as Harry’s mother mourns the death of her son. No matter the rest of the season, go to the bank that Bell will have a Carbonell nomination a year hence.

But it’s not a perfect production on two counts.  First, the crucial sense of modern day Americans thrust into a magical almost supernatural miracle just never comes across. It looks and feels like a Broadway musical with singing and dancing actors, albeit very good ones who can pluck the audience’s heartstrings. But we never suspend disbelief for a moment and that robs the show of some of its potential charm.

Second, the Wick staff is proud that they have built in-house the set designed by Randel Wright. But the crude evocation of a secreted mountain idyll by draping painted burlap over plywood and splaying it with projections is only a few cuts better than a high school production if it had a big budget, even though it has a turntable.

Derek Lockwood clads the cast in colorful plaids and tartans that echo the fantasy of what we want to think was plebian couture of 18th century Scotland. Josieu Jean works overtime painting the set with his projections and Kirk Bookman’s lighting becomes darker as the show’s vibe does, although his illumination of the opening town square marketplace scene is way too bright to give the town any sense of mystery and magic. Justin Thompson does a solid job making the sound clear.

Still, the yearning of hearts in this production will make most audience members on the way home dreaming of finding their own Brigadoon.