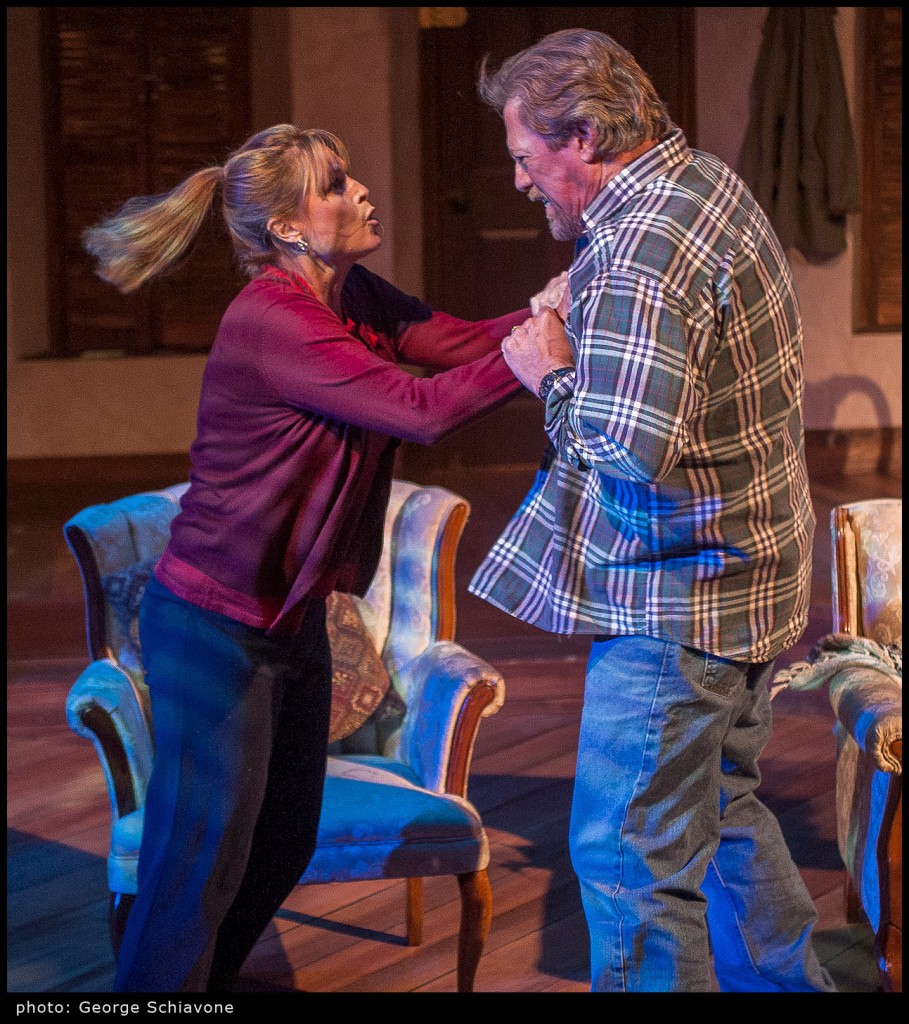 Cannily, there is not a feather in sight during the entire 85-minute The Birds at the Mosaic Theatre — appropriate because the subject is not an eerie avian apocalypse, but how humanity reacts under extreme pressure.

The birds’ presence just outside the shuttered windows and claw-raked door of a coastal farmhouse is created by sudden, palpable terror in the eyes of actors Kenneth Kay and Kim Cozort and by the superb sound design by Matt Corey.

As an examination of human nature, the Mosaic production under John Manzelli’s direction depicts our best and worst instincts – loyalty, betrayal, courage, fear, generosity, selflessness and self-preservation at any price. Manzelli and his cast of four deliver a credible portrait of people thrashing about in a crucible of implacable Nature taking its revenge in a Biblical Judgment Day.

As good as these folks are selling the overall premise and the tragic devolution of their ad hoc family unit, something indefinable about the script doesn’t land as solidly as you hope. The psychological dread, the quickening pulse of a thriller is absent. The play doesn’t flag, but audience members were checking their watches as humanity slowly stumbled over its old fatal flaws and then ventured out into an uncertain future carrying its sins with them. It’s difficult to be riveting when depicting a slow dissolution.

It’s not that McPherson has abandoned the edge of du Maurier or Hitchcock. The Birds feeds the Irishman’s enduring love of telling stories about the seemingly supernatural, seen in his The Weir and The Seafarer (one of Mosaic’s past triumphs). But he knows that creating encroaching terror is almost impossible in 21st Century theater whose audiences have been desensitized by film and real life carnage.

So, he picks up the story more or less where du Maurier and Hitchcock ended theirs and with different protagonists. Two strangers, Ned (Kay) and Diane (Cozort) have taken refuge in an abandoned farmhouse. A radio station in its own death throes is broadcasting reports of surrounding communities being wiped out by squadrons of birds descending upon hapless humanity with claws and beaks.

Diane has been nursing Ned who collapsed from a fever. Once he awakes, both are instantly unhinged by the slightest flutter of wings outside that would sound benign in other circumstances. They have seen too much already.

Ned may have past mental health issues and Diane, a writer, has had severe family troubles. But they band together for mutual survival and form a sexless union of  sorts. When the birds depart every few hours along with the tide, the couple mounts forays into the countryside to forage for food and supplies.

Manzelli deftly directs a scene early on in which the birds are battering the outside of the house. Inside, the terrified Diane and Ned are trading personal details as if they are on a get-acquainted date – all the while grasping a hammer for protection and cowering against the walls. The absurd counterpoint works.

Their family unit is completed when they are joined by Julia (Vera Varlamov), a lovely young woman whose stories of her escape don’t quite hang together. Later on, as it becomes clear the ranks of humanity have been decimated. Diane will be visited by a lonely curmudgeon living across the lake (Kevin Reilley) who is equipped with booze, pills and a shotgun.

Over several months, the interpersonal dynamics shift and secrets pop out as well as homicidal impulses. McPherson has one character say, “As long as there’s kindness, there’s hope,” but has another say several scenes downwind, “Anyone left out there is an animal.” The cast made both portentous observations plausible and valid.

In the last 10 minutes, McPherson takes the plot into a dark left turn absent in either du Maurier or Hitchcock . It may not follow the source material but certainly is in line with McPherson’s view of humanity’s baser impulses. The world ends not with a bang or even a whimper, but with flawed creatures compelled to enter into a world as uncertain and potentially fatal as any at the height of the Cold War.

This adaptation premiered in 2009 at Dublin’s Gate Theatre. It was supposed to open last season at Mosaic for its American premiere, but McPherson asked Mosaic last winter that it be delayed. It opened the following month at the Guthrie Theater in Minneapolis.

The acting is always persuasive if not especially subtle, given the script’s reliance on looks of wide-eyed fear and ominous pronouncements. It’s a pleasure to have the married Kay and Cozort, once the backbone of the Caldwell Theatre, back home from North Carolina exhibiting their talent for merging seamlessly with their characters. Among their achievements here with Manzelli is creating, from the moment the lights come up, that these characters are genuinely petrified and the survivors of a horrific reality.

Another plus is the mostly invisible work of Manzelli, producing artistic director of City Theatre and cofounder of The Naked Stage, who spends a good portion of his life teaching at Barry University. A talented actor himself, Manzelli has a feel for staging actors with physical body language. Again, he has not gotten especially nuanced performances from the cast but the script doesn’t really lend itself to that.

No assessment of the production could omit the essential contribution of Corey’s sound design. It’s not simply the ingenious permutations of wings flapping. In one brilliant cue, the flapping grows and grows until it sounds like the deafening hammering of the air by a helicopter rotor directly overheard, and then it’s cut off with what sounds like the clanging slam of a heavy door. But equally impressive were the almost imperceptible sounds he lay in that give you a sense of reality even if your conscious mind doesn’t notice them, such as drip of water.

The farmhouse’s interior is impressively rendered by Douglas Grinn who wraps the walls and shutters around the sides of the audience arrayed on two sides of a square playing space. It’s too large a set to feel claustrophobic, but it put the audience inside the rustic living room with the characters.  The passage of time and many moods are enhanced by Suzanne M. Jones’ ever shifting lighting design.

In the end, The Birds is worth a visit, but it’s more a cerebral contemplation than the nightmare-inducing fright that you might expect. 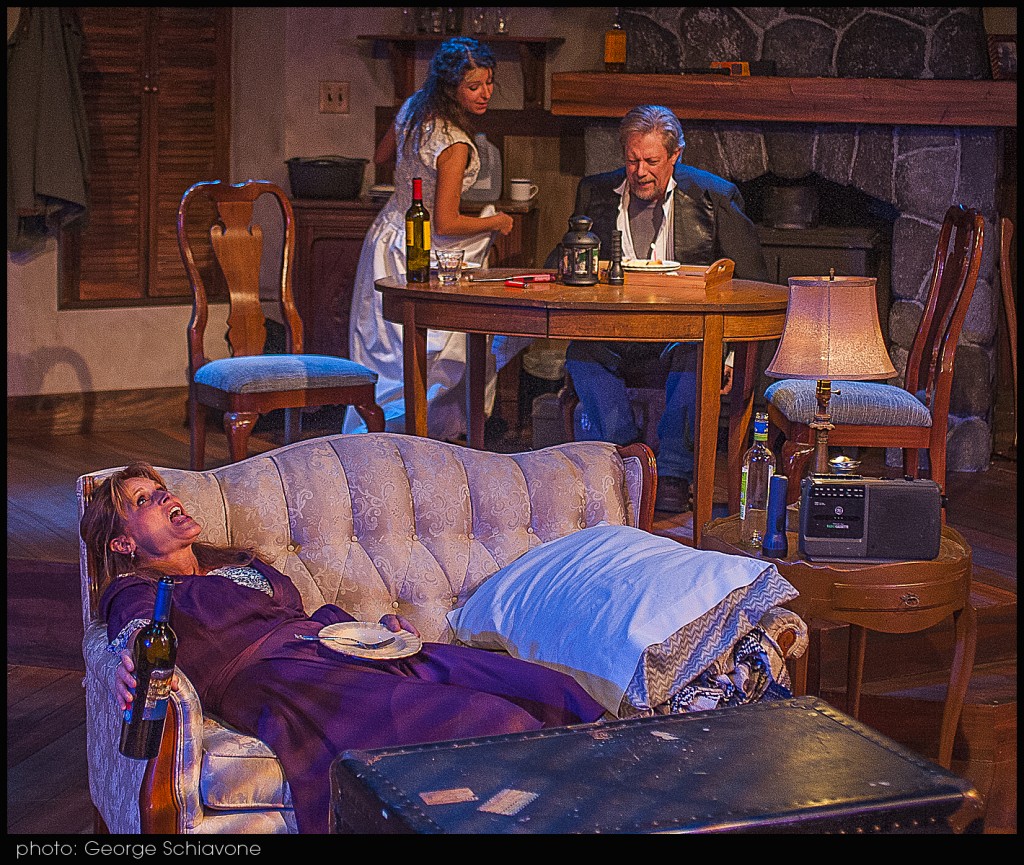