New ‘West Side Story’ Has Winning Strengths, But Weaknesses Too 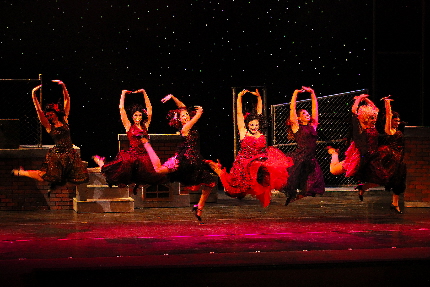 People who have attended a great deal of theater over the years, especially regional theater, know that there are shows they have seen several times that they still look forward to because the raw material is so strong and productions always have strengths that make them worth seeing.

But they have never seen a perfect production of that brand of piece in which all of the elements are literally excellent and every aspect reaches the absolute potential of the possible. The Glass Menagerie is a good example

So is West Side Story. The Prather family’s new Broadway Palm series at the Lauderhill Performing Arts Center is a prime example. There is so much to praise: Alexa Lopez’s luminous Maria, Dean Sobon directing his cast to excavate the drama out of Arthur Laurents’ criminally underrated book scenes, Ron Hutchins’ solid choreography, Eric Alsford’s musical direction of a live pit band supplemented by lush tracks, and the swirling intersection of the lovers’ voices in their poignant duets.

And yet, this joins the four or five local productions in recent years to underscore how there are always aspects that fail to live up to what everyone intuits the piece can be.

That means that this production inaugurating the venue’s partnership with the Prather family, which has operated dinner theaters in Fort Myers and Pennsylvania for decades, indicates future promise and is worth checking out. But almost imperceptible shortcomings add up to keep it from being a fully satisfying edition.

To start with, some of the singers such as Lopez have lovely voices doing full justice to Bernstein’s iconic and range-challenging score, but several others including a couple of key people do not, missing notes, tempo and the like.

Some have solid acting chops and verve, notably Pasqualino Beltempo who is doing the role for the fifth time and invests the Sharks’ leader with commanding confidence, macho sexism and undeniable sexiness. But again, others in the cast are less convincing.

As always, always with so many productions, many (but not all) of the performers playing the Sharks and Jets would be mugged on the street or robbed of their lunch money on the playground within five minutes. This cripples these productions because it’s crucial that these people exude a sense of having lived with and felt forced into violence as the only answer to the ills around them. And as is always the case, as it is here with Jacob Tarconish, with whoever plays Tony. He used to be one of these who lived and died by the rumble and the switchblade, but the actors are always a fresh-faced fella with a great voice. (Acknowledge that while Tarconish doesn’t look the part, he beautifully and credibly pours out the passion of someone who has discovered a new world in “Something’s Coming,” and his duets with Maria.

The sound quality is inexplicably commendable and horrific. The miking of the band is first-rate and it never overpowers the singers – a major accomplishment. But microphone equipment fails and microphones on actors are cued in late repeatedly, destroying any hope of the audience staying in the moment. (As I recall, this was a problem as well when Broward Stage Door performed in this space.)

It’s easy to forget just how brilliant Laurents’ script, Leonard Bernstein’s masterpiece of a score and Stephen Sondheim’s lyrics are in capturing with compassion and incisive depth of the angst of youth, the cauterized expectations for the future, the injustice of xenophobia, the challenges to first and second immigrants. Credit Sobon for ensuring these thematic elements are not lost. God forbid someone try to set this in 2019 (we can hope the upcoming film and Ivo Van Hove’s imminent Broadway revival dodge this idea), but the current resonances are inescapable.

Hutchins once again melds his own vision with the essential elements of Jerome Robbins’ iconic original works – much as he did for Actors’ West Side Story in 2016. Most of his troupe do a commendable job with the side leg lifts to the sky, heads tossed back, hips jerking and the skirt-shaking mambo moves. 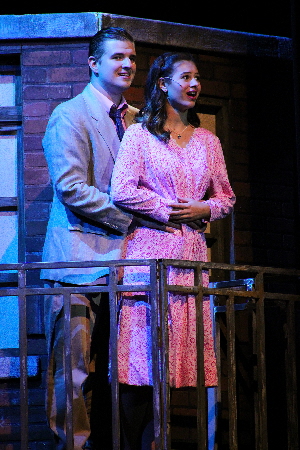 Lopez, a 17-year-old senior from American Heritage, and Tarconish succeed where other productions falter: their faces, their voices are credibly aglow with the belief that a better world is possible exists, a dream of unity that the musical luxuriates in in the famous “Somewhere” ballet and then evaporates as the reality of hate, fear and violence take over.

The new series plans to mirror the mainstream titles that the Prather family has championed for years: Once, Dec. 5-22; Kinky Boots, Jan. 23-Feb.9, and Beauty and the Beast, Feb. 20-March 8.

One Response to New ‘West Side Story’ Has Winning Strengths, But Weaknesses Too