No Need To Go To NYC To See My Fair Lady; Try Vero Beach 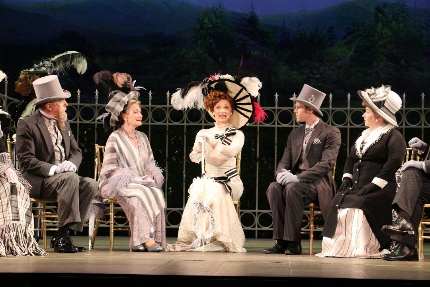 You’ll be hard pressed to find a more energetic and exquisitely directed production of My Fair Lady than that on stage now at Riverside Theatre in Vero Beach.

Directed and choreographed by James Brennan, this professional production of Lerner and Loewe’s 1956 award winning classic is a theatrical feast serving up humor, strong performances, lusty choreography, impeccable elegance and music that tests the audience’s will to behave.

The musical is based on George Bernard Shaw’s play Pygmalion, which itself was named after a mythological Greek sculptor who falls in love with his own ivory sculpture of a woman. Although the musical’s happy ending is different than the play’s cynical ending, much remains the same.

Set in 1912, it strides between two worlds – the rarefied environs of London’s one-percenters and the lowly tenements of East London.

Inspired by hubris, famed phonetician Prof. Henry Higgins bets his colleague, Col. Pickering, that he can turn a poor Cockney flower girl, Eliza, into a lady who can turn heads at a high society ball. He wins the bet, but it leaves Eliza caught in the middle of the two worlds.

She had wanted only to be cultivated enough to work at a flower shop. But now, she’s too good for even that. Not fitting in anywhere, her only hope is to marry.  At the same time, Prof. Higgins has grown fond of her, but he denies his feelings.

Within this simple set up are progressive themes espoused frequently by Shaw, a politically energized Irish playwright. Those themes still, alas, ring true today — the gnawing injustices of class distinction, privilege, the hypocrisy of the upper classes and the mistreatment of women.

Brennan’s skilled direction amplifies those themes. Indeed, “woke” audience members will get a #MeToo kick out of his emphasis on an otherwise throw-away line said by Col. Pickering on this brief bit of dialogue:

Higgins says “Have you ever met a man of good character where women were concerned?” Beat. Pickering answers, “Yes. Very Frequently.”

But those are the deeper currents, there if you want to swim in them. Riverside’s production has so much entertainment you won’t notice the lesson at all.

The direction and choreography of this show is bold and big, filled with satisfying performances and a snappy pace. It is what we have come to expect from Brennan, who has directed and/or choreographed 10 shows at Riverside, including “Miss Saigon,” “Crazy for You,” “Vanya and Sonia and Masha and Spike” and “Hello, Dolly!”

You’ll whoop with delight at his rococo blocking, vaudeville schtick and even a can-can line in the vivacious musical number “Get Me to the Church on Time.” There were audible cheers after that number on opening night.

Brennan also takes a big chance with timing in the resplendent Ascot Gavotte number where the ultra-bored high society gather to watch a horse race. You’ve probably never seen such a long bit of silence on Riverside’s stage as in that number, but it pays off with sweet, witty comedy.

But no matter how gifted Brennan is, he can’t deliver without his talented cast, especially its quartet of remarkable performers who have stage presence from here to Broadway.

An energetic ball of total delight, Kristen Beth Williams gives flesh and fury to Eliza Doolittle. And, like Williams did in her role of Sibella in the first national tour of A Gentleman’s Guide to Love and Murder, she sings like a dream while exuding character. Her “Wouldn’t It Be Loverly” and “Show Me” are filled with verve. She is also drop dead hysterical when, at the Ascot races, she uses perfect elocution to describe an experience worthy of a Penny Dreadful.

As Henry Higgins, James Ludwig, who was in the original Broadway cast of Spamalot, displays comic befuddlement over the aggravation Eliza causes him. We see Higgins’ duality, the war in him between rational thought and human heart, especially in “I’m an Ordinary Man.” And despite his dastardly actions, your own heart will break in his mournful “I’ve Grown Accustomed to her Face.”

As Alfred Doolittle, Eliza’s drinking and womanizing father, Tom Souhrada is nothing short of perfect.  Like many of his castmates, he has a wealth of credits and it shows in his confident, infectious fun. When this role is done right, like it is here, Alfred Doolittle would come close to stealing the big musical numbers like “With a Little Bit of Luck,” it weren’t for the overall strength of the standout ensemble.

A Drama Desk Award winner and Broadway veteran with credits as long as your arm, Ed Dixon gives warm lovability to his character of Colonel Pickering, the ideal foil to Higgins. The trio’s “The Rain in Spain” is winning.

Other standouts include Kathleen Huber as the stately Mrs. Higgins and John Donovan Wilson who, as Freddy Eynsford-Hill, sings an exquisite “On the Street Where You Live.”

Music director Anne Shuttlesworth gets such rich sound from her nine pit musicians you’ll come close to believing a full orchestra has snuck in.

Scenic designer Paul Tate dePoo III does some splendid work here, although it’s a bit perplexing why Higgins’ grand London home would not have a separate room for Eliza. Instead she’s forced to sleep on the couch in the study, and she’s a good girl she is, so she deserves a proper room with a bed. Nevertheless, his multitude of drops and gorgeous study for Higgins are winning.

Kurt Alger continues his superior work designing this opulent array of costumes and wigs.  And lighting designer Julie Duro makes it all shine so pretty.

With a celebrated production of My Fair Lady on Broadway right now at Lincoln Center, area audiences are lucky that Riverside secured the rights long ago.

And, yes, Lincoln Center has its Bartlett Sher and its team of professionals. But Riverside Theatre has its James Brennan and its own coterie of top notch artists. Gushing much? Perhaps. But go to Riverside’s production of My Fair Lady and see if you don’t agree.