Not Your Average Nutcracker

Posted on December 1, 2012 by Bill Hirschman 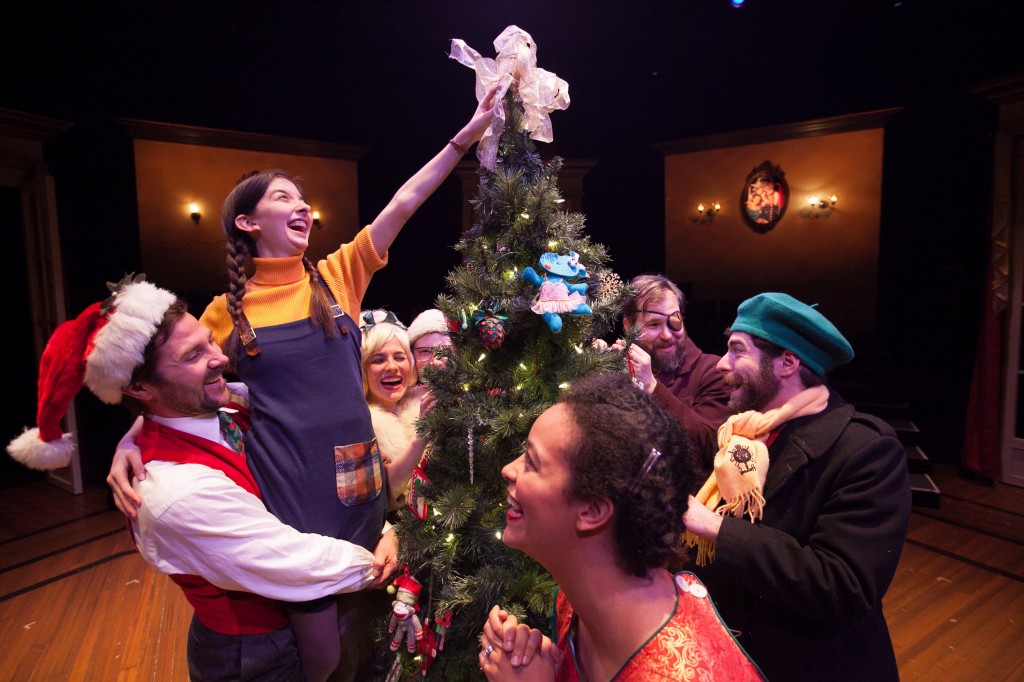 But leave it to the House Theatre of Chicago to come up with a quirky twist on The Nutcracker co-produced with the Adrienne Arsht Center. Yes, there is a cheery celebration with freshly-baked cookies offered to the audience and a lovable teddy bear come to life. But it also turns on a son killed in a Middle Eastern battlefront, a terrifying vision of giant flesh-eating rats and a Dr. Phil moral about facing your innermost fears. You know: a family show for a dysfunctional 21st Century family.

Since it was created by the people who brought us The Sparrow and Death and Harry Houdini, this play with musical numbers is also a celebration of unbridled theatrical imagination that revels in creatively deploying lighting, sound, puppetry, movement, stagecraft as well as an edgy sensibility that is always worth seeing. They embrace the artifice of theater. In one scene, a procession of people exit one  door and return two seconds later through another door a few feet away. “Ah, a new location,” one actor quips.

The problem is this Nutcracker seems like two separate shows badly grafted onto each other. Intermittently, half the evening is a very-well executed children’s show with wild chases, simplistic songs and funny costumes. The other is aimed at adults with such sober aspects as parents unable to deal with their son’s death, and sly humor like one rodent telling another, “I’d like to kiss you on your boca raton.” In scores of similar events, this results in a something-for-everyone smorgasbord that satisfies everyone. But here, the children’s material is too simplistic to charm the adults unless they have a child in tow, and the adult material baffles children. Some audience members will be thoroughly enchanted, but others will struggle to reconcile the two halves of the evening.

The Nutcracker was created at the House in 2007, brought back into the workshop and then revived in 2010 in Chicago. That version has become a holiday tradition ever since in the Windy City where another company is performing it now.

The script by Jake Minton and Phillip Klapperich is a serviceable riff on E.T.A. Hoffman’s novella later used as the basis of the ballet. Set in the present, a family’s joyous annual Christmas party comes to a halt when a Marine comes calling with an American flag folded in a triangle. A year later (the time lapse is not made clear for another half-hour) the shut-down parents (Renata Eastlick and Josh Odor) are foregoing the holiday, even after slightly weird Uncle Drosselmeyer (John Wilson) appears from his world-wide adventures to try to revive their Christmas spirit with a bit of tough love and some genuine magic.

“There is poison in this house and we’ll have it out by Christmas,” he declares.

This delights the surviving daughter Clara (Mary Sansone), especially when her great-uncle gives her yet another of his dolls, this time a nutcracker painted to look exactly like her dead brother Fritz, down to the Marine Corps dress blues. You can perceive this as an ingenious reinvention on the original story or insensitively creepy.

Clara and her toys-come-to life (Zeke Sulkes, Sarak Bockel, Joey Steakley) and Fritz himself (Joey Stone) try to shake the parents out of their sorrow by resurrecting holiday traditions. These backfire such as Clara cutting down a Christmas tree candidate only to be told that the parents planted it to celebrate Fritz’s birth. To succeed, the toys and Clara will have to battle the giant rats hiding in the walls, first in some bloodless Keystone Kops tussles to entertain the children, but later by dragging fears of death and loss into the light, learning to live in direct spite of the ever-present darkness.

The eccentric impressionistic score by Kevin O’Donnell and decidedly run of the mill lyrics by Minton are adequate but completely forgettable. O’Donnell leads the six-piece band, which emphasizes the composer’s vibraphone and some strings to carry the oddly-constructed melodies.

Director Tommy Rapley, being a choreographer as well, moves the cast inside an intimate theater-in-the-round in a dizzying swirl of almost perpetual motion.  Most of the time this works beautifully such as the extended opening scene of a rapturous party. The scurrying about in the fantasy scenes of chases and fights fascinated the children but seemed overly frenetic, protracted too long and even downright sloppy. But acknowledge that Rapley isn’t afraid to stage moments without dialogue, showing relationships just by the way people look at each other or stand in relation to each other.

The cast, a hybrid of local actors and House regulars, is unfailing enthusiastic as they dive deep into two and three roles. You have to love how they regularly steal a few moments to play with a child in the stands or shoot off an impromptu comment out of character to the adults. Eastlick (so sensuous in GableStage’s Ruined) and the House’s Josh Odor seamlessly switch gears between playing jovial rats wearing red-tinted Elton John glasses and sporting a British accent in one scene, then seconds later with a costume change, becoming the emotionally stunted, grieving parents. 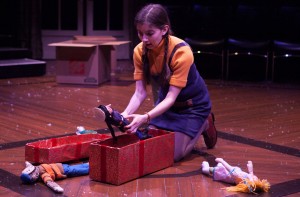 But the spotlight belongs to Sansone, the standout in this season’s A Shayna Maidel at Broward Stage Door. A slender adult with long pigtails and an elfin visage, she propels the show with a child-like enthusiasm that radiates from her huge grin and shining eyes. She creates a young girl who is painfully aware of the cold reality of her parents’ isolation and yet open to the possibility of dolls that can come to life and talk.

It wouldn’t be a House show without some inspired bits of theatrical stagecraft that would be a crime to reveal. Just watch out when Clara tries to enter the walls of the house by cracking open a magic “wall-nut” that Drosselmeyer gave her, and look for a moving bit of magic in the closing seconds of the show.

Caveat parents: Children of seven or older will find the production enthralling as they would most children’s theater. But younger patrons are likely to be badly spooked, even terrified if they’ve never been to theater before and unable to realize it’s all in fun. Heck, those huge rats with glowing red eyes unnerved me. 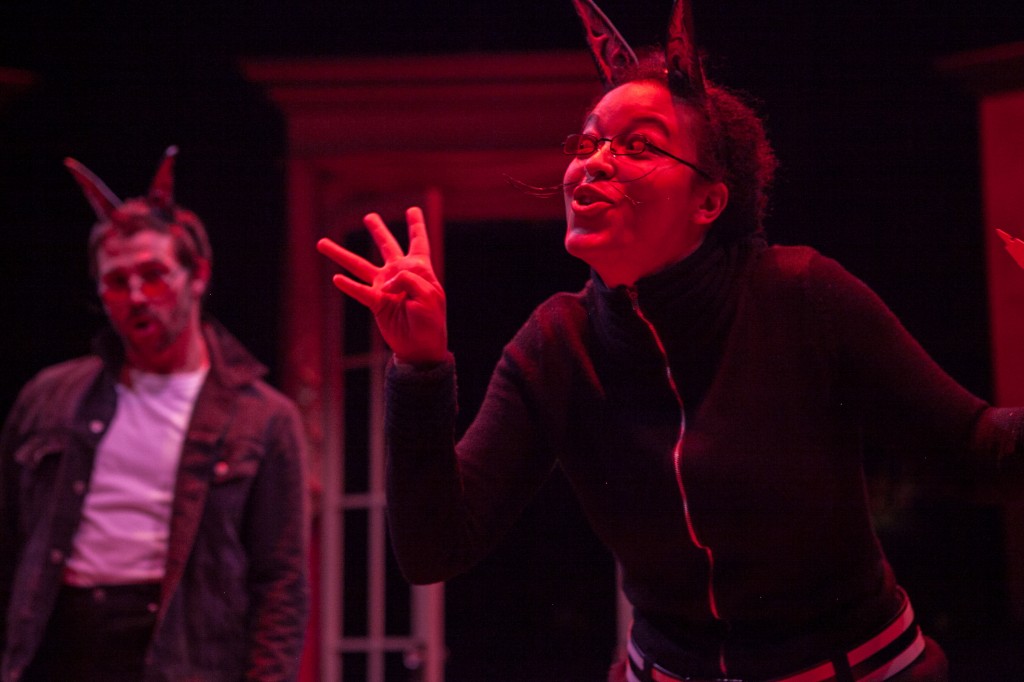 Josh Odor and Renata Eastlick as two of the evil rodents.