One Man, Two Guvnors Is Entertaining If A Bit Long 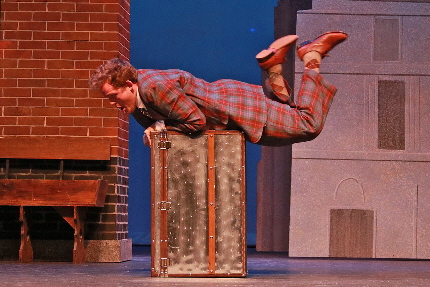 Wesley Slade losing a wrestling match with a trunk in Actors’ Playhouse’s One Man, Two Guvnors / Photo by Alberto Romeo

There are probably 27 synonyms for the word funny and 157 familiar tropes. All the words apply and all the classic bits can be found in Actors’ Playhouse’s farce One Man, Two Guvnors.

Every technique from wordplay to slapstick, you name it, it’s all here in this award-winning 2011 play by Richard Bean, an English adaptation of The Servant of Two Masters, a 1743 commedia dell’arte style comedy play.

The humor-crammed reworking is set in 1963 Brighton and requires a cast of tireless clowns molded by a director with a deep, deep trunk of tricks. Fortunately, this perfectly describes this troupe and, of course, David Arisco’s well-established talent for broad comedy.

But there are asterisks, starting with what plays as a long, long evening for a comedy with a complex plot that loses the audience early on. Even this enthusiastic band of theater artists cannot keep the patrons’ enthralled for 2 ½ hours.

Second, the show on opening night took a good half-hour to catch fire. Bogged down by delivering truckloads of exposition that no one could follow, you could hear actors missing a score of opportunities for humor in the delivery of lines that are there on paper but just flew past unexploited.

Third, sometimes the witty dialogue got lost in the British accents as the actors raced through the verbiage.

And yet, Actors’ Playhouse’s production provides a cornucopia of laughter in a melding of the 300-year-old comedy genre with the sensibility of the British music hall and American vaudeville. When executed perfectly, as it was in London and Broadway featuring that new kid from The History Boys, James Corden, it was deemed the funniest farce since Noises Off.

The dense plot defies terse description and shortchanges Bean’s intricate construction. But to give a flavor: An out-of-work skiffle player Francis Henshall (standing in for Harlequin) accidentally becomes a servant simultaneously to a gangster and an upper class twit. Francis ricochets between their conflicting demands while trying to keep each unaware of the other’s call on his services. Throw in twins, an ancient doddering waiter, envelopes with cash, misdelivered letters, a very hungry Francis seeking nourishment and his even greater hunger for a buxom bookkeeper who may be the smartest person in the play. Lust is a major theme throughout.

Like a British music hall, the show opens with a concert by a just-pre-Beatles skiffle band that echoes Buddy Holly’s stirrings of rock but is mostly faithful to the period’s traditional pop music. They also play between every scene change with individual actors sitting in with a ukulele, xylophone, steel drum, even bicycle horns. These inserts of original music are entertaining but they also add a good 15 minutes to the running time that could be argued with.

Again, this makes the most of Arisco’s encyclopedia of farcical business including his penchant for creating seemingly impromptu situations which are not. But he has also cast it well.

Wesley Slade, memorable from GableStage’s demented adolescent puppeteer in Hand To God, is indefatigable as the linchpin, Francis. With a mobile face always scrunched in grimaces and grins, Slade might not have Corden’s innate charisma, but he provides a strong likeable Everyman we instantly root for. Some of his words get lost in the rapid-fire accent, but his body language and physical comedy are hilarious, especially in the play’s famed tour de force sequence in which Francis wrestles with a heavy trunk. Slade also smoothly handles ad libs when interacting with the audience, although, again, you can bet that Arisco has planned some of these likely options in advance.

The ensemble gives their all as well with intentionally well-defined caricatures straight out of commedia dell’arte. First among equals, no surprise, is Clay Cartland as a preening actor-aesthete, an over-the-top role that Cartland invests with his endless imagination for striking poses. Cartland and Arisco make the most of Bean’s parade of classic bits such as using the word Woolworth in the second act with the whimsy akin to Who’s On First.

Close behind is Anna Lise Jensen showing yet another hitherto unseen talent, this time for comedy as the object of Francis’ sexual pursuit and who is far smarter and more adroitly manipulative than anyone else in the room.

Leah Sessa is a not-too-bright fiancée, Paul Louis is her father and a local gangster,  Christopher Chisholm as a lawyer and the actor’s father, Krystal Millie Valdes is a sister dressed up as her murdered brother, Cliff Burgess is the man she loves, Reggie Whitehead is a friend of the family, Phillip Andrew Santiago is the impossibly elderly waiter and Christian Ortega is a chef. I think we got that all correctly.

The band in silver shark-skin sport jackets is led by musical director Daniel Bailey on bass, Chase Maddox on guitar, Lukas Weber on washboard and trap set, and Erik Fabregat on guitar and lead vocals.