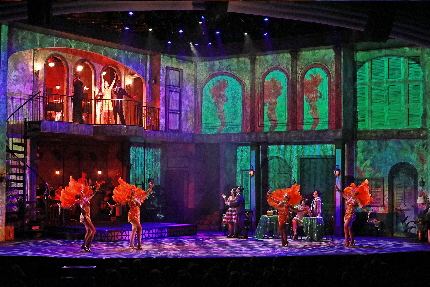 From the first supple trumpet blast opening the world premiere musical Havana Music Hall at Actors’ Playhouse, the stage explodes with color and light and dancing and singing and, above all, that pulsing music, all ablaze with a vibrancy and vitality of a time and a world far away.

This protracted recreation of a Cuban nightclub in 1958 likely makes the point clearer than any speech, documentary or treatise about the cultural, spiritual and artistic treasure that was lost when Castro seized power.

The subsequent depiction of the nightmare that ensued and a second act that revisits the same characters 60 years later speaks directly to the Cuban experience for three generations of Floridians whose families came from there, may still have family there and who may have lost family there.

And in that facet, this work with its eye on Broadway hopes to make its story of loss, resilience and rebirth resonate with anyone whose family came from “The Old Country” whether it’s in the Caribbean, Europe, Africa or Asia.

Whether it does or not remains to be seen. Trying this material out in South Florida is like asking your mother what she thinks of your singing. But a broader cultural audience should feel a tug when dialogue and lyrics frequently intone “We will never turn our backs on our homeland” or when imminent émigrés vow “I will never forget where I came from.”

Havana Music Hall is the brainchild of Richard Kagan, a 72-year-old New Jersey-born Jewish insurance salesman, but also an experienced background producer of Broadway musicals. He conceived the piece to fulfill a growing fascination with Cuban music and the musicians stranded after the Revolution. With the guidance of several Cuban-Americans, he wrote the score, supervised many rewrites of a script, shepherded it through a dozen readings and workshops over four years, and is bankrolling a bill closing in on $2 million.

With the integral work of director/choreographer Maria Torres plus a dozen other designers and creative minds, Kagan has succeeded in mounting a sometimes flashy, sometimes poignant, always earnest tale of artists whose lives and careers were shattered, and how they dealt with the tragedy, then and in today’s Cuba.

The result is a promising piece that needs work, certainly, but which in this incarnation is a thrilling evening that is inarguably entertaining for almost anyone and nearly guaranteed to coax tears out of Latinx audience members who see their families’ past and present incarnated in three dimensions.

The story opens in December 1958 at the titular venue, a popular one-tier-short-of-success club owned by the young husband and wife musical team Rolando and Ramona Calderon with her brother Alberto. A 10-piece nova-bright band and a ensemble of knife-sharp dancers roar with life as they run through opening numbers.

An entertainment entrepreneur offers them a career-making gig at his top of the line Tropicana Club for New Year’s Eve. But no sooner do they break loose in their opening number than the shadow of Batista’s escaping airplane crosses the stage.

The brutal regime commandeers artistic expression, especially in the entertainment industry. Resistance has tragic results for the irrepressibly passionate Calderons and their extended family. The couple is separated, ends up in jail, tortured and exiled to the sugar cane fields. Alberto and his wife take the Calderon’s infant in their escape to America.

The second act is set 60 years later as the pair and their associates try to cope with “the new Cuba,” which is just as repressive, but now putting on the sham of a peaceful veneer to welcome American tourists. Today’s Calderons are emotionally and spiritually battered, and Rolando wants to do nothing to stir up trouble. But their unofficially adopted son Yariel is a charismatic young street hustler with a real musical talent and an idea that will upend their status quo despite the still repressive government. Their stories develop into a finale of hope.

The chief virtue is Kagan’s melodic score, orchestrated by Broadway vet Larry Blank and augmented by Cuban musicologists Luis Serrano and Jose “Perico” Hernandez (whose life history provided much of the story). The sound drives a clarion brace of brass, sashays sexily with the entire catalog of Latin rhythms and sighs in lament-riven ballads. In addition to the songs, much of the show has mood-setting underscoring.

Kagan’s lyrics with input from Hernandez are more prosaic and straightforward almost to the point of being clichés. Sondheim it’s not. Some lyrics don’t sit evenly on the musical line and often don’t bother to fit any rhyme scheme. But they are delivered with so much heart by the cast that it’s impossible to mock them.

Torres’ tornadic passion is evident in the actors’ performances and her staging is a swirling sensuous celebration rooted in her encyclopedic experience as a choreographer. If the narrative stops dead occasionally for a production number, it is usually a welcome gift like an irresistible conga line or a hypnotic bird of plumage ballet in a dramatically half-lit nightclub.

The only weak area is the script, which has gone through numerous hands over the years, formally attributed to one of the most recent, Miamian Carmen Pelaez. The dialogue and the entire narrative arc sound like the kind of story that Cuban-American abuelas tell young children at bedtime. The musicians are heroic artists with indomitable spirits, the revolutionaries are moustache-twirling automatons wearing sunglasses. It all is likely absolutely true, but it comes across as melodramatic, terribly pat in its storybook coincidences, and, frankly, cartoonishly two-dimensional.

Or after the takeover, as the outspoken Rolando rails at the new rules: “Why? If it’s my country I should be able to say whatever I want to say, no? Not scurry around like a scared mouse wondering who’s telling on who and what will happen next.” To which his wife soothes him with, “It’s temporary.”

But the script lands solidly when outrage and passion erupt. Rolando tells a former employee turned revolutionary: “Tell me Julio, please, you know so much. What’s Cuban about biting your tongue? What’s Cuban about communism? What’s Cuban about murdering people that don’t agree with you? What will be left of Cuba when this craziness is over? You think you can deny me or any of us anything? You’ve imprisoned my wife. My child is thousands of miles away and you think there’s something more you can do to me? You think putting on fatigues make you men?”

Underneath it all is the pride and love of music, which the script communicates clearly. Rolando says early on, “We are Cuban musicians which means music is in our souls and in everything we do. My grandfather taught my father, my father taught me, and I will teach my daughter, Elena…. Julio, you must be born with music, play every day of your life. Music becomes who you are and the rhythms alone can take a lifetime to learn….”

Even the bumpier moments are saved by the Torres-directed cast. Many of the New Yorkers are originally from Miami, and several are recognizable local talent. Several have heard these stories from their families and clearly feel they are getting a chance to tell their stories for the first time.

Returning to his hometown, Alexander Pimentel, who glows like a minor sun, embodies the proud, arrogant young Rolando unwilling to curb his temper. Linedy Genao, gorgeous in voice and persona, is a ravishing young Ramona who exudes a fierce spirit and intelligence. With warmth and strength, Isbelia Duran makes the older Ramona the heart of the show’s commitment to honoring the artists who stayed behind.

Special mention is due veteran Miami actor Oscar Cheda (recently of It Shoulda Been You and memorably in The Adding Machine) who stepped in halfway through preview week to take over the leading role of the older Rolando. He slips into the skin of a former idealistic young firebrand whose spirit has been virtually ripped out by reality. He has the essential vocal ability for the emotion-choked songs, but his most memorable moment comes at a crucial turning point when he rips open many a tear duct in the audience simply by silently mouthing “Gracias” to God for an especially unexpected gift.

But most of the cast is solid as well, especially Bruno Faria (Slow Burn’s Bonnie and Clyde) as the pragmatic but spirited brother, Alberto. When Faria and Pimentel front the band, smiling with joy, bodies swiveling, often backing up Genao, there is little need for the extra spotlight.

New World School of the Arts grad Jorge Barranco is the spirited bantam-rooster Yasriel whose youth and animated body language underscore that the newest generation of Cubans still harbor that ebullience and passion in  their DNA. The large cast also features Elaine Flores as Alberto’s wife, and Phillip Andrew Santiago as a busboy who gets an aural survey course in the many Latin rhythms in wood-stick clapping “La Clave.” Standing out in the production numbers are the sex-made-terpsichorean-flesh dancers Christopher Hernandez, Angely Carucci and Sarita Colon.

Credit Kagan and Torres with not skimping on this spectacle of a production: Paul Tate dePoo III’s evocative two-story set; Ann Closs-Farely’s panoply of colorful character-exposing costumes with plenty of spangles and plumes; Cory Pattak’s morphing lighting; and that full-throated band so sympatico with the music under the baton of Tony Seepersad.

Especially memorable are the projections from Eye Q Productions that turn the central set into various locations by covering the walls with evocative overlays including slideshows of scenes that show the passage of time, insets of videos of the characters dancing, and even throwing animated foliage blossoming across the walls of Actors’ Playhouse’s auditorium.

If this show has a future is anyone’s guess. The Estefans’ rousing On Your Feet only did middling well in New York and on tour. But local audiences should savor its present.

To read a feature on the making of the show, click here.

See HAVANA MUSIC HALL before it hits Broadway! This exciting new production reflects the pulse of our community with its irresistible musical beat and heartwarming story centering on Cuban musicians Rolando and Ramona Calderon, and their lives in Cuba from 1958 to the present. Don't miss this moving and relevant new musical that explores the challenges and joys of one family’s 60-year odyssey for survival, presenting a journey which immigrants of all cultures from around the world have traveled for generations.Tickets $30 – $75Actors' Playhouse at the Miracle Theatre280 Miracle Mile | Coral Gables, FL 33134 | 305.444.9293www.actorsplayhouse.org