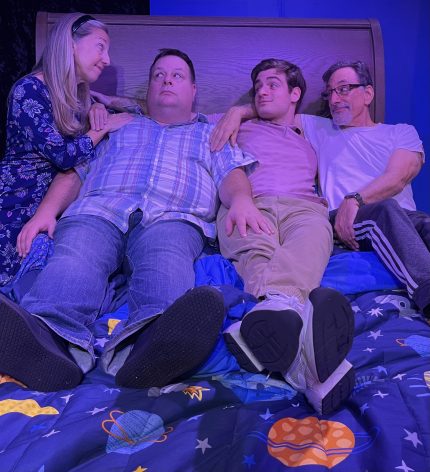 Sometime in the mid-1960s, the classic tired businessman comedies on Broadway began to change, much of it due to Neil Simon who subtly mixed in a smattering of gentle themes with the expected paid-for hilarity.

The percentage of that recipe’s ingredients evolved over decades until the meld has become its own genre category, the “dramedy,” a challenging concoction that is not just harder to write, but harder to direct and act credibly on stage.

So savor an unqualified success in that field with playwright-actor Ronnie Larsen’s The Actors at The Foundry in Wilton Manors. Copious laughs dominate a seemingly silly sit-com situation, but they recede (though never disappear) as the human angst underneath keeps poking toward the surface until it becomes the reason for the evening.

The premise: Ronnie, a lonely man in his 50s, misses his late parents so deeply that he hires desperate out-of-work actors Jean and Clarence to impersonate them inside his apartment for two or three hours a week invoking the parents’ backstories, a few key phrases and situations echoing his childhood. Not portray them fictionally, but to actually be them for short periods while he pretends to be a child. They lovingly putting him under his space-themed bed covers as he wears onesie XXXL Superman pajamas.

He tells Jean: “Just scenes from my life…like when I was a kid and we’d bake a cake together…or when she gave me a present for my birthday… happy memories…boring memories…comforting memories…maybe you’ll make me do my homework and …maybe we’ll fight one day…and maybe you’ll send me to bed without getting to watch TV or we’ll pray together,”

He suggests: “Not much weirder than a normal play, no? So just think of it like you’re doing a regular play but without an audience.” She recalls with humorous rue, “Well, I’ve actually done that before. Arsenic and Old Lace, The Pittsburgh Players, 1962.”

But what Ronnie sketches out for the hired actors to inhabit may not be quite as faithful to his past as he makes out. As Jean later observes of her own situation: Real families are a mess.

Like any classic comedy, you are supposed to see much of the ensuing arc coming. But not all of it. The saving grace visible every minute is Ronnie’s insatiable loneliness and longing for family. Yes, Ronnie has created a ridiculous situation but you never stop caring about the little boy lost inside the man driven to an extreme even he knows is absurd. And eventually the story takes a substantial and substantive turn examining human beings’ profound yearning for affirming connection.

The challenge to all the artists in this production is that the constructed reality of Ronnie’s living-room “project,” and the supposed reality that it is based on from Ronnie’s childhood, and the actual realities of Ronnie’s past, and the hired actors’ intruding offstage life, all careen around, bouncing off the walls like those run-amuck ping pong balls in a room full of snapping mouse traps.

In this metaverse, Ronnie the character, Ronnie the playwright and Ronnie the actor in front of an audience at the Foundry sometimes overlap. When Jean suggests maybe this could make a terrific commercial play because “art can heal,” Ronnie the character – without acknowledging the Foundry audience on the other side of the fourth wall – says, “If I wanted an audience for this project, I would have rented a theater and sold tickets. I don’t want people to see this. Why would I want anyone to see this?”

It’s a worthy addition to Larsen’s wide range of playwriting from gay sex comedies to the justifiably acclaimed performance and script for An Evening With John Wayne Gacy.

As commendable as the script may well be, it is catapulted by a skilled cast of veteran pros including Larsen, Jeni Hacker, David Kwiat and Jerry Seeger — all at the top of their comedy game thanks to the peerless direction of Stuart Meltzer. Their abilities will be taken for granted by most in the audience, but theater artists can assure you their skills on view cannot be overstated.

The supple quality of the acting, the script and the direction are especially triumphant in scenes where the hired actors want to stay in character as parents after a convincingly tender scene of parental affection, but the adult all-business employer Ronnie drops the charade like a mask in a credible 180 of personality.

Hacker is especially on target portraying a Donna Reed paragon of motherhood one moment and then off-duty instantly dropping the character on the floor, becoming the pragmatic hungry actress. Kwiat, whose has always invested his characters in drama and comedy with a bit of a daffy lost quality, is hilarious as the disintegration of his real life pushes him deeper and deeper into this invented one. Newcomer Chad Raven is fine as a third visitor to the “family,” blissfully as interested in getting to eat the many birthday cakes in the scenes as anything else.

A separate nod is due Seeger who had cut back on his acting to teach. Happily, he now returns to provide the story a welcome dose of reality as Ronnie’s brother who cuts through both the hired actors’ pretense and some of Ronnie’s unreliable narration.

But leaving the best for last, Larsen the actor is simply a marvel. Yes, he wrote the words, but his ability to live inside the skin of this troubled man goes far beyond the co-habitation of writer and actor. While he has plenty of impassioned speeches, just watch the incredulousness on the character’s face as the insanity mounts around him.

And Meltzer proves once again his ability to apply his skills of staging and detailed if invisible invention to the widest range of theater from musicals to drama to comedy. He always manages to forge in his casts a uniformity of style and artistic voice. He nurtures performances that can be alternately and even simultaneously funny and aching. One thing we’ve noticed in almost every Meltzer production is that the actors are always in the moment whether they are the focus in the scene or off in the background watching other characters in the spotlight. Additionally, all of the actors are always employing communicative body language and facial expressions.

It can’t hurt that Meltzer, Hacker and Larsen teamed up in 2019’s Grindr Mom in the same venue — a funny, subtle and tender story about a conservative mother coming to terms with her son’s sexuality

Perhaps we’re leading readers to believe this is some brilliant ground-breaking work when even this team would gently scoff at that. (It does run a tad too long). But in these troubled times, it’s a comfortably satisfying evening of laughs and memories.

Note: The show is formally produced by Ronnie Larsen Presents and Plays of Wilton Inc., a year-and-a-half-old company that has attracted a loyal audience and a number of generous donors including the LGBTQ-focused Our Fund Foundation. The Actors won The Hive inaugural production contest in 2018 and it was the first production in their new theater in Provo, Utah.

For helpful tips about directions, parking, arrival time, etc., visit the Contact Page at http://www.islandcitystage.org/contact/.  Do not park in the retail spaces directly across from the theater. They may tow your car.