Report From New York: Bat Out Of Hell (The Musical) — You Already Know If You Should Go 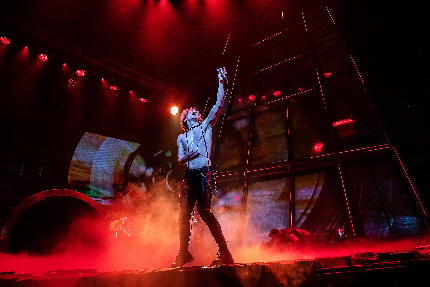 By Bill Hirschman
With Peter Hirschman

And Jim Steinman’s deathless rock n’ roll played at 11 on a 1 to 10 scale and sung with unrestrained passion by some talented performers.

So, yes, the musical theater evening inspired by Steinman’s classic 1977 album Bat Out of Hell is precisely what you expect it to be. For some, that means pure nirvana, despite and even because the script is a silly lampoon of Broadway tropes – although it is constructed as precisely as anything dictated by the Broadway Blueprint Manual. It is not trying to be simply a greatest hits revue.

Others not as inclined should stay far away during this production’s limited run through September 8.

My brother Peter, an acolyte of Steinman’s on-disc partner Meat Loaf, was transported throughout the show during the press preview, lip-syncing every song taken from all of the duo’s albums, Steinman’s solo work and even a hit he wrote for Air Supply, “Making Love Out of Nothing at All.”

Peter wrote, “The music is so infectious that I defy anyone (familiar with the music, of course) not to sing along or mouth along with the music, and at certain points I think I did!”

Personally, as a fan of countless playings of the original Meat Loaf album, it was an unmitigated hoot. The enthusiastic cast (some from the British world premiere a few years ago), the solid band in the pit, the intentionally daffy vibe all merged into a thoroughly entertaining evening.

Especially notable was how composer Steinman as playwright inventively inserted his catalog into the narrative. The placements were hardly subtle; instead Steinman took pleasure in spotlighting the ingenuity of the inclusions where you don’t necessarily expect, but must acknowledge later that they were wittily appropriate. For instance, the mini-opera of adolescent lust, “Paradise by the Dashboard Light” is not sung by the leading young couple, but performed by the girl’s middle-aged parents recalling how they hooked up and first had sex.

Steinman’s story, such as it is, is a sort of Sharks and Jets, Montague and Capulets set up if it was being told by Kurt Cobain.

Strat, as in Stratocaster (Andrew Polec), the charismatic 18-year-old leader of a rebellious but lovable street gang, “The Lost,” comes on stage in front of a black backdrop. Sporting a mop of unruly blondish hair and bright blue eyes ringed with Goth makeup, he grabs a stand mike and proclaims loudly, “I remember every little thing as if it was yesterday.” He raises his arms, an explosion of light blinds the audience, the drape falls and we are transported to post-apocalyptic urban Obsidian of 2030. Teens have frozen in age and live in the poverty-stricken subways, pursued by the upper class still living in luxurious penthouses. Strat is “doing his best to liberate the people of Obsidian, give them equality, make them all feel special and give them value in their lives.” Anarchy is celebrated as an enviable and more honest lifestyle. Strat’s dream – besides true love – is, “I just don’t want to be invisible.”

Strat falls for Raven (Christina Bennington), the gorgeous gamin daughter of the tyrannical ruler Falco (Bradley Dean) and his disaffected wife Sloane (Lena Hall of Hedwig fame). The often shirtless Strat romances the ready-to-rebel Raven away from her family. Falco sics his troops on The Lost. You can figure out much of the rest of the show from there. Indeed, Bat Out of Hell is a good half-hour longer than it needs to be because it refuses to abbreviate the Holy Writ of songs the audience knows by heart. Further, the predictable book scenes are so clearly just the excuse of connective tissue and you just want everyone to get on with why you came in the first place.

But an added layer stems from Steinman’s interest in the Peter Pan story, which he has been trying to make into a musical since he was a collegian more than a half-century ago.  He has inserted here some his 1970s attempt at a musical Neverland (which provided three songs for the Bat Out of Hell album). Strat will never grow up. The gang mirrors the Lost Boys of Neverland. Raven is a Wendy stand-in. A young gang member Tink betrays his adored leader just as Tinkerbell does. On and on. Still, it’s actually much more inventive than it sounds.

The Lost includes Broadway dancers in punk clothing doing stylized choreography by Xena Gusthart, as well some fine singers, such as Strat’s lieutenants played by Tyrick Wiltez Jones and Danielle Steers who do a heartfelt if American Idol duet for “Two Out of Three Ain’t Bad.”

Polec has a slightly different voice than Meat Loaf – more trained more accurately hitting the actual notes — but his passion-infused timbre echoes the master so well that you don’t miss Mr. Loaf. Bennington has a lovely winning quality that can embrace the outer image of purity and innocence as well as Raven’s anxiousness to be awakened to the passion of the outside world. The two actors, who obviously have some off stage relationship, have more chemistry than Monsanto and Dow.

The evolving show opened in Manchester, ran in London, moved to Germany where they loved Steinman’s work in the legendarily bad Dance of the Vampires, then back for a successful run in London, then to Toronto and was supposed to tour 19 American cities before a New York stand. The tour was cancelled, leaving this run at New York City Center the remaining date. Reportedly, the tour has a chance at being revived.

Director Jay Schieb (an MIT professor and stager of operas) and music supervisor Michael Reed have immersed themselves in Steinman’s much-quoted, “If you don’t go over the top, how are you going to see what’s on the other side?” Although they have their own vision, it smacks of a mash-up between Rock of Ages and American Idiot.

If you are more than intrigued by the prospect, you won’t be disappointed; if you have doubts, listen to them. The show has its flaws, but it’s hard to think about them when you are virtually run over by a screaming motorcycle coming straight at you as the band screams “Bat Out of Hell.”

Bat Out of Hell will be performed through Sept. 8 at New York City Center, 131 W. 55th St. Running time: 2 hours, 40 minutes with one intermission. Visit nycitycenter.org for times and prices.

This entry was posted in Performances, Reviews and tagged Bat Out Of Hell, Christina Bennington, Jim Steinman. Bookmark the permalink.