Retooled Porgy And Bess Swells, Soars And Rips The Heartstrings 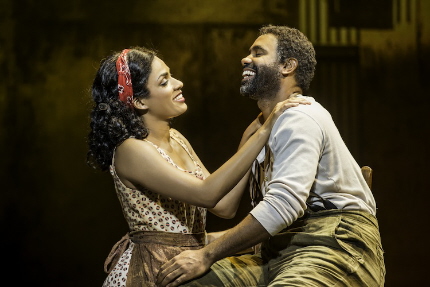 Bess (Alicia Hall Moran) and Porgy (Nathaniel Stampley) glory in their new found love in the retooled revival of the Gershwin-Heyward folk opera at the Kravis / Photo by Michael J. Lutch

You know The Gershwins’ Porgy and Bess at the Kravis Center is opera because you can’t understand a third of the lyrics even in English; you know it’s glorious opera because the swelling music and soaring voices make specific words unnecessary.

Although this retooled version played Broadway in 2011 to attract a younger audience, this remains very much an opera with broken melody lines, recitatives, arias and intricate chorale arrangements wrapped in echoes of Harlem jazz, Gullah folk music, spirituals and work songs. But this heart-stopping production reaffirms the genius of the Gershwin brothers and the 21st Century talents who reshaped it.

Dozens of people left at intermission opening night, likely having hoped for something like Newsies. But that spoke to their limitations, certainly not any shortcoming of this moving production.

What emerged here more strongly than any other rendering we’ve seen was the completely credible non-saccharine depiction of the transformational power of love.

Other than forcing audiences to struggle to discern many of the words, this is an outstanding version of the 1935 folk opera based on a play based on a novel about Porgy, a crippled beggar, who succeeds in wooing the fallen woman Bess from the murderous bully Crown but not quite from the temptations of heroin offered by the Sportin’ Life. Composer George Gershwin and his lyricist brother Ira researched the feel of the South Carolina fishing village of Catfish Row populated by impoverished African Americans in the 1920s. The libretto and earlier source materials were by DuBose and Dorothy Heyward who grew up in South Carolina and Ohio. The catch is that all of them were white.

But what the emotional truth they uncovered is both universal as seen in this production. When Bess admits her infidelity yet Porgy reaffirms his love for her, and when Bess responds with the first unfettered outpouring of devotion in her life, calcified aortas were ripped wide open. The pair walked away from the scene different people, even if they remain fallible human beings. Two wounded souls found the salvation they dared not dream of and it gives every sensitive heart hope for their own lives.

There’s something more real and relatable here than in many classic European operas also turning on passion and betrayals. It’s not the American milieu. It’s the multi-dimensional and unflinching exploration of the same emotions, garnished with themes of faith in God despite tragedies not to mention racism.

This is the secret behind the work of director Diane Paulus (currently represented in New York by Pippin), book adapter Suzan-Lori Parks (Top Dog/Underdog) and musical adapter Diedre L. Murray. Their reworking may anger some purists (including Stephen Sondheim) and there’s a certain whiff of defensiveness by inserting the Gershwin name in the title – plus leaving off credit for the Heywards. But the final product lands solidly. Among the changes are subtle alterations that make this work – originally created by well-meaning white men and women – less objectionable to black audiences. Top of the list is erasing stereotypical characterizations while staying true to the unsophisticated, elemental natures of the denizens.

Of course, the show’s greatest virtue is the folk score by the two urbane Jews from Brooklyn reshaped by Murray and orchestrators William David Brohn and Christopher Jahnke. From the urgent clattering xylophone notes in the overture, it evokes a confidence in the strength of the material. The score is by turns lush, muscular, gentle, aching, full of praise and lamentations, heartache and joy.

For all their operatic chops on display, much of the cast comes from the Broadway world and they infuse their vocal performance with an actor’s ability to communicate a three-dimensional persona.

Nathaniel Stampley makes Porgy’s decency and devotion believably organic facets of his character, a significant feat given how life and Bess treat him. Alicia Hall Moran’s Bess plausibly transforms from a slatternly consort to a person whose soul is released into the light but who cannot trust fate.

Watching their two crucial duets is like watching separate beings gingerly reaching out, coming together and merging into one creation. When Stampley’s declares “Bess, You Is My Woman Now” or Moran’s voice pours out “I Loves You, Porgy,” respiration stops.

The rest of the cast is just as good including Kingsley Leggs as the satanically venal Sportin’ Life, Alvin Crawford as the menacing Crown, Danielle Lee Greaves’ Mariah, Denisha Ballew’s Serena and Sumaya Ali’s Clara who opens the show with “Summertime.”

The road production is an even more stripped down version of the stripped down vision used on Broadway with scenery reduced to evocatively lit backdrops plus a few chairs and crates. But the show has 26 members in the cast who Paulus effectively arranges and rearranges to give the sense of a community.

An ovation is due the orchestra led by Dale Reiling and a traveling core of three colleagues, augmented by 20 local musicians who sounded as if they had been melding for a week but actually only began rehearsing together that day. Helped by some of the best sound quality at a Kravis Broadway production, the sound of individual instruments rightfully emerged bright and clear from the full rich wave of orchestrations emanating from the pit.

Side rant: West Palm Beach audiences on opening night once again pulled ahead in the ongoing sweepstakes for rudest audiences in the country. It goes without saying that a couple of dozen people stood up to leave during the moving final scene, and that scores and scores more left later during the patented South Florida Running Ovation. But what defied understanding in the Dead Inside Department was after the aforementioned scene in which Bess and Porgy reaffirm their love. Most people couldn’t breathe, let alone move. But a trio of well-dressed baboons lifted themselves on their haunches and loped up the aisle. I hope the heart transplant was still waiting for them at the hospital.

One Response to Retooled Porgy And Bess Swells, Soars And Rips The Heartstrings