REVIEW: You Made Me Love You Will Enchant Senior Patrons 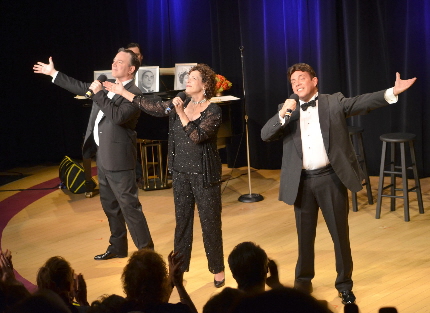 Jon Zimmerman, Melissa Boher Jacobson and John Lariviere croon a tune in You Made Me Love You — a revue of the music sung by Al Joson, Fanny Brice and Eddie Cantor. / Photo by Tina Valant

Before the lights went down at The Plaza Theatre Wednesday, the 82-year-old Brooklynite was telling his seatmate in the audience how the world was going to hell in a handbasket. He waxed about his youth when you could get into a fight without guns going off and marijuana was only used by jazz musicians.

And while he conveniently omitted that it was also a time of racism, sexism and a spirit-crushing depression, he was receptive and ripe for a soothing reaffirmation of his memories. He got it.

The Plaza’s cabaret revue You Made Me Love You – a celebration of the music made popular by Al Jolson, Eddie Cantor and Fanny Brice – is comforting soul food for The Greatest Generation, delivered in a creamy concoction poured by a trio of smooth and sincere singers probably born after all three titular icons had died.

The audience was hopelessly and happily seduced by the eighth bar of the title song. Throughout the matinee, the stage lights caught beaming faces whose lips mouthed the lyrics.

The auditorium became a decidedly irony-free zone with a retro purity encapsulated in nearly 40 songs that barely acknowledged the possibility of gray skies. The closest it veered toward introspection was the mild heartbreak of “I’m Always Chasing Rainbows,” affectingly crooned by John Lariviere.

The tux-and-gowned cast – Lariviere, Jon Zimmerman and Melissa Boher Jacobson – were blessed with vibrant voices more at home with these richly melodic tunes than in other Plaza shows we’ve seen them in. Ably backing on the baby grand was Mark Galsky, playing solid arrangements by Vic Glazer. They gleefully mugged for the audience, raised eyebrows, popped out their eyes like Barney Google, punctuated their songs by pumping a cocked arm in a “by golly” motion.

The fourth wall evaporated. The performers frequently walked right up to the lip of the stage, even across the non-existent footlights to kiss a patron’s hand or warble directly into their eyes. The men led two women from the audience to glide across the stage while Jacobson sang “The Anniversary Waltz.”

Wisely, none of the three attempted to imitate the three legends even though they adopted many of the standard flourishes and licks inextricably linked with each vaudeville/Broadway star’s signature numbers.

Jacobson poured herself into Brice’s torchy “My Man,” the second best-known song of the He-Can-Abuse-Cheat-And-Hit-Me-But-I Still-Love-Him school of music (the first being “As Long As He Needs Me.”) But she was just as good impersonating Brice’s Baby Snooks eye-rolling persona down to the pink and lace baby’s outfit and oversized lollypop.

The show biz charm of Zimmerman, armed with a permanent Pepsodent smile and twinkle in the eyes, was evident as he wooed the audience into joining in on the refrain of “Making Whoopee.” He gets points for keeping a straight face as he threw himself unreservedly into that last verse and chorus of the painfully anachronistic Jolson tune, “My Mammy,” by nearly crying out the spoken ludicrous lyrics (“It’s my Mammy I’m talkin’ about, nobody else’s! / Mammy, Mammy, I’m comin’/  I’m so sorry that I made you wait! / Look at me, Mammy! Don’t you know me? / I’m your little baby!)

Lariviere has a warm, more down-to-earth appeal and he’s especially effective with a heartfelt ballad.

These revues provide two public services. Back in the day, almost every song had a protracted introduction with a different melody, even a different key that then slid into “the song” that most people whistle and hum later. But these shows resurrect all those intros rarely done today. So, one, it reveals the undeniable skill for words and music that over-familiarity has robbed of the main piece. Two, it creates a game you can play with yourself: Guess what well-known standard is coming up after the introductory stanza is played. I mean did you know there was just such an intro before “California, Here I Come.” Thought not.

Boomers have no room to laugh snidely. As that sage theologian Sylvester Stewart said, “Different strokes for different folks / So on and so on / And scooby doobie doobie / Ooooh, sha-sha.” Proof? Later in the season, Plaza is doing a cabaret of Linda Ronstadt and James Taylor music. Really. So I’m anxiously waiting another decade for the nostalgic jukebox musical of the Justin Timberlake/ Miley Cyrus/Bruno Mars oeuvre.

Bottom line: If you are under 70 or have no personal connection to this music, this is likely something to pass on. But if you are 70 or older, this is a guaranteed crowd-pleaser.

You Made Me Love You  runs through Sept. 29 at The Plaza Theatre, 262 South Ocean Boulevard, Manalapan (the Ocean Blvd. bridge is closed for two years; come across the Intracoastal Waterway by Lake Road on the north or Boynton Beach Blvd. or Woolbright Road on the south, allow a little extra time for slow traffic on A1A.) Running time 1 hour 45 minutes including one intermission. Performances 7:30 p.m. Thursday-Saturday, and 2 p.m. Wednesday, Saturday and Sunday. Tickets start at $30.  Call (561) 588-1820 or visit theplazatheatre.net.

This entry was posted in Performances, Reviews and tagged Al Jolson, Eddie Cantor, Fanny Brice, John Lariviere, Jon Zimmerman, Melissa Boher Jacobson, The Plaza Theatre, You Made Me Love You. Bookmark the permalink.

One Response to REVIEW: You Made Me Love You Will Enchant Senior Patrons