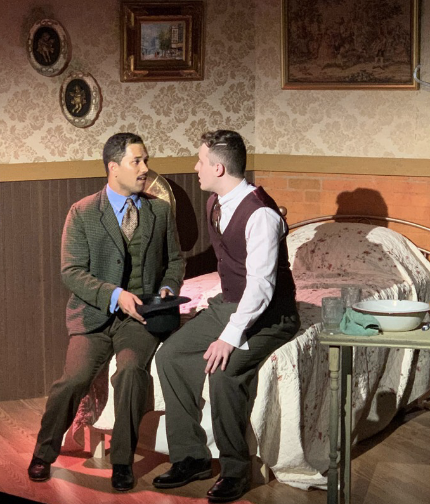 Sure, it was a time of revelry. But it was also a period when sex or even perhaps a kiss between people of the same gender could lead to a beating and a jail sentence. However, for the most part, the characters on stage here seem as unconcerned and safe as though they were living in modern-day Wilton Manors.

Come Out! Come Out! is experiencing its world premiere in a vivacious production. It features triple threat performers who appear to effortlessly tap dance as though it were as natural to them as breathing. Their vigorous footwork, part of Kurt Phelan’s creative choreography, earned well-deserved applause during the reviewed performance. Moreover, the performers fully inhabit their characters and emote well while singing. In fact, their voices sometimes blend so well that they sound as pleasing as a seasoned barbershop quartet.

And musical director Bobby Peaco, whom composer/lyricist Jerry Herman reportedly called “the best show pianist I have ever heard,” accompanies the actors’ robust, expressive voices. In particular, Peaco’s flawless keyboard playing produces a rich sound without drowning out the performers.

But while Larsen’s piece is an engaging, vibrant and touching, it’s a work in progress. For instance, it needs the kind of palpable tension people feel when their actions could result in severe consequences.

To be fair, the shrill of two whistles from an unknown source, perhaps a police raid, pierce the quiet twice – once shortly after the show’s beginning and the other toward the end. At least the first time, the sound caused the characters to freeze. Even so, the musical needs more tense drama. Perhaps, multiple such abrupt noises or sightings of figures in shadows would unnerve these characters further.

Indeed, if the characters palpably and near constantly felt on edge while having sex, or even enjoying brief, clandestine trysts in the park, the musical would more vividly serve as a reminder “that our newly found rights and freedoms cannot be taken for granted” – the way Larsen and his co-director Michael Mills’ program notes describe Larsen’s purpose in writing the show.

Its main character is Jacob, a young gay man. He strongly desires that a man kiss him, marry him and start a family with him. It appears Jacob’s main obstacle is not law enforcement hiding where people engaging in “deviant” behavior cannot see them. Rather, Jacob’s main hurdle seems to be that no man wants to at least kiss him. Late in the play, Jacob says as much when he begs for a man to kiss him. But then, how do you explain an earlier scene in which Jacob and Edward, a fellow single gay man, enjoy themselves under the covers in Jacob’s apartment? Is it really plausible that Edward would consent to steamy sex, yet not kiss his partner?

Rather than a fully-formed plot, the musical seesaws between scenes centering on the characters’ efforts to form satisfying relationships and vaudeville-like scenes. The latter captures the “Anything Goes” aura of the “Roaring 20’s.

True, the scenes that capture that ambiance are entertaining, invigorating and visually breathtaking. Still, this show works best during touching, heartfelt moments during which we can truly identify with the characters. These moments include a scene during which an emotional and vulnerable Edward bravely describes to a sympathetic Jacob an upsetting experience from his past. Edward describes his ordeal, which might move you to tears, as an “earthquake.” It’s one of two strong metaphors that Larsen uses. The other comes during the song, “If You Want the Rainbow You Must Have the Rain.”

Quite possibly, the rain stands for upsetting incidents or setbacks that gay people have had to endure (or still do) to achieve full equality and freedom in society (represented by the rainbow). Or the rain might stand for harsh penalties that they suffer after law enforcement catch them performing “deviant” behavior. Or, the rain could be a stand-in for loneliness and feelings of frustration that these characters experience in their efforts to establish everlasting relationships.

All of the songs in are originals from the period. The genres include tap, soft-shoe, and vaudeville. Larsen has chosen music that fits into his narrative and helps reinforce emotions, from joy to loneliness. Interestingly, the title song features lyrics similar to those in The Wizard of Oz. It’s the same show that made the gay anthem “Somewhere Over the Rainbow” famous.

The cast’s quartet of performers credibly portrays these emotions. As Jacob, Greyson Wade delivers a multi-faceted performance. It’s blessed with spontaneity and charisma. The fresh-faced Wade kicks off the show by radiating carefree charm, a sense of serenity and joy. This is especially true during the opening number, “I Just Roll Along (Having My Ups and Downs).”

As Jacob interacts with the other characters, his charm, sense of calm and seduction make him likable, if a bit pushy. Meanwhile, Wade equally succeeds at conveying frustration and sarcasm, even thunderous anger at one point, when he senses obstacles to his objective are immovable. Wade makes it clear that Jacob is trying to control himself, with just some success.

Meanwhile, Chris Carranza gives us a nervous, searching Edward. He’s a man looking for his place in the world. The performer particularly shines when Edward relates that traumatic experience to Jacob. Carranza describes the events in a shaken voice and with a familiarity that suggests he remembers them as though they just happened. Clearly, the incident has left Edward scarred.

Another cast standout is Zachary Swartout as Billy, a one-time fling of Jacob’s. Billy is married to a woman. Together, they have children. And Swartout’s Billy is credibly conflicted, trying to please Jacob, yet strongly defending his heterosexual marriage and passionately praising his wife through song. Dom Giovanni plays Norman.

The action takes place on Melqui Dominequez’ simple, yet effective set. It includes a model New York City skyline. A barrier separates it from the park in which the characters gather for conversation and quick trysts. The barrier, while short, divides the characters’ world of secret gatherings from the “real world” of downtown New York City. Walkways from the park conveniently lead to Jacob’s apartment. It includes enough period detail to place us in the 1920’s.

Larsen is a successful and prolific theater artist. His shows have experienced Off-Broadway productions and his work has seen productions throughout the U.S. and in foreign countries. Recently, he had five shows running simultaneously in Broward County and his work has earned two Carbonell nominations.

Come Out! Come Out! is a promising musical that can become stronger with some improvements.

The show can remind us that despite all the gains the LGBQT community has made, there are forces today that are not friends of this community. They may wish to push back the clock to a scary time like the period in which this musical is set. Perhaps to reinforce the musical’s connection to today, actors sometimes enter the stage from aisles in the audience seating area.

Seen from this lens, Larsen’s new musical is a warning tale not to take today’s freedoms and equality for granted.

At the same time, Come Out! Come Out! is an entertaining and refreshing tale. It celebrates the bravery of gay men during a time when it would have been easy for them to hide in the closet. Instead, they “come out,” and fight for their desires.

The world premiere production of Come Out! Come Out! runs through March 29 at The Foundry space within the Wilton Theatre Factory, 2306 N. Dixie Highway in Wilton Manors. Performances are at 8:30 p.m. Wednesday through Saturday, 4 p.m. Saturday and 3 p.m. Sunday. Premium front row seats cost $50, while general admission seating is $35. For more information, visit https://www.ronnielarsen.com/come-out-come-out or call (954) 826-8790.