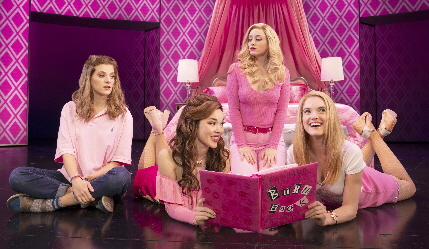 Oh, those mean girls. If you were unlucky to encounter them, they made your high school days unbearable, humiliated you so you felt inferior and tried to dictate who your friends were. They weren’t fun to be around—even if you were in their inner circle. But Mean Girls, the Broadway musical making its South Florida premiere at the Broward Center through March 15, sure is fun.

Credit Mean Girls’ entertainment values to comedienne Tina Fey who wrote the musical’s book based on her popular 2004 film about finding your way in a high school where cliques dominate the social order. The script, which is pretty faithful to the movie, also features music by Jeff Richmond (30 Rock), and lyrics by Nell Benjamin (Legally Blonde) under the leadership of Broadway’s premier director-choreographer Casey Nicholaw (The Book of Mormon and Something Rotten!).

Florida Theater on Stage editor and chief critic Bill Hirschman and I saw Mean Girls in 2018, eight months into its run on Broadway, where it is still playing. The delightful musical makes a solid transition to its tour in regional theater houses.

Mean Girls, of course, isn’t Hamilton but it makes a terrific introduction to theater for young audiences. Without getting on a soap box, Mean Girls slyly delivers a message about finding who you are and being yourself; not succumbing to peer pressure to do wrong actions; and to value your friendships.

This is the fourth Broadway production my young companion has seen in South Florida and she was entranced. She knew much of the dialogue before it was uttered and she watched the movie the night before.

Mean Girls centers around 16-year-old Cady Heron (an appealing Danielle Wade) whose biologist parents move from their home on the African savannah to suburban Chicago. In Africa, Cady only had to deal with wildlife, including lion prides. But Cady finds the “prides” in her new high school are much more vicious and selective.

Trying to fit in, she is immediately befriended by goth girl Janis Sarkisian (a solid Mary Kate Morrissey) and theater nerd Damian Hubbard (the terrific Eric Huffman). But she’s soon targeted by the uber clique to end uber cliques—The Plastics led by Regina George (the deliciously nasty Mariah Rose Smith) and her minions—the insecure Gretchen Wieners (Megan Masako Haley) and dim-bulb Karen Smith (Jonalyn Saxer). At first, Cady agrees to spy on The Plastics for Janis and Damian. But the power of popularity and acting superior to others are seductive and soon Cady is following The Plastics’ commands. Then there’s a boy Cady is interested in—and that doesn’t go over well with The Plastics, who are anything but pretty in pink.

Each of these young actors is on point with their roles. Wade’s transformation from the plain, sloppily dressed teen to a more glamorous young woman works well. Smith is so nasty that you swear she could burn down the world as she sings in “World Burn.” Cady may be the center of Mean Girls but the showiest roles go to Morrissey and Huffman—both of who anyone should be proud to call a friend. Morrissey’s charismatic persona is in full gear. And Huffman—oh Huffman—demands the audience’s attention whether he’s singing one of his beloved show tunes, dancing or exhibiting his acting chops. Compliments go to Gaelen Gilliland who moves easily from the math teacher to the mothers of Cady and Regina, both of whom obviously had different upbringings.

Mean Girls is centered around all the trials of being in high school and is more for those over 12, with parental guidance. But with its focus on sex, vindictiveness, drugs and alcohol, all relevant to high schoolers, we are not sure it is age appropriate for those children under age 12.

Before Mean Girls starts, an array of high school photos with rude sayings makes a kind of virtual yearbook. As my companion said, “It wouldn’t be Mean Girls without those sayings.” When these sayings morph into kinder, gentler sayings at the finale, it reinforces the idea that meanness pales next to niceness.