Posted on November 7, 2022 by Bill Hirschman 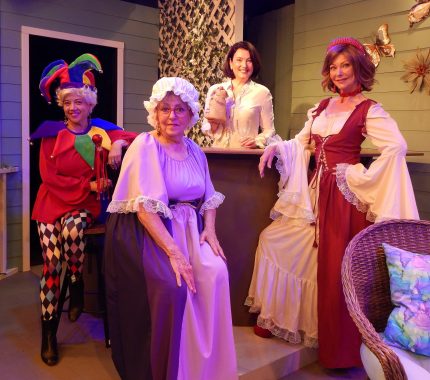 “Reptile attacks aside, I really do believe things are getting more interesting. And having this feeling in my late sixties is awesome, Dude!” a senior citizen exults in the hilarious, moving, and rejuvenating play about living, The Savannah Sipping Society.

The Ft. Lauderdale-based professional company, Pigs Do Fly Productions (PDFP), is presenting the piece in a believable and laugh-filled mounting through Nov. 20. The venue is Empire Stage, an extremely intimate space on Flagler Street in Ft. Lauderdale.

You might say that PDFP and The Savannah Sipping Society represent a perfect pairing. Indeed, the company’s mission is to highlight actors and characters over 50 living their lives in interesting, involved, and exciting ways.

Certainly, the play by Jessie Jones, Nicholas Hope and Jamie Wooten features characters engaging in exciting activities. Undoubtedly, these older folks feeling the monotony of routine become determined to live life to the fullest by seeking out new adventures. In addition, they are not about to let their painful pasts get the best of them.

Whether these characters are chasing each other like mischievous children at recess or using words common among today’s youth, they are sure to keep you laughing.

Of course, you have to credit the cast of five fine actors. They demonstrate deft comic timing and sincerely portray their characters, who never become caricatures or stereotypes. It is a recipe for success with any comedic material, and it works here. Also, to their credit, the performers ably convey their characters’ vulnerability when necessary.

Leading the actors is director Deborah Kondelik. She infuses the production with comic energy, while leaving room for touching moments to move us. Also, Kondelik paces the roughly two hour and 10-minute production well, and smartly stages it. The production includes a 15-minute intermission.

The Savannah Sipping Society takes place mostly in present-day Savannah, Ga. The piece may remind you of Steel Magnolias. Specifically, both plays feature one liners and strong female characters who form a tight bond. However, the play by Jones, Hope and Wooten, well-known for their endearing comedies, contains less pathos than Harling’s comedy-drama.

If The Savannah Sipping Society reminds you of a sitcom, there is a good reason; the playwrights, referred to collectively as Jones Hope Wooten, are former sitcom writers. In fact, Wooten was a writer-producer for The Golden Girls.

Zingers fly fast, frequently, and land with precision in The Savannah Sipping Society. It begins after a few women meet at a hot yoga class and find that each of them hated the experience. One of the characters invites the others to her home and soon they become friends. One of the women is a life coach, and she takes on the others as clients. Can she help breathe new life into their existences?

“Tell you what, after six months, if you don’t see any change, you don’t pay. Is that fair or what?” Jinx, the life coach, asks them.

Jinx is the kind of upbeat and encouraging person who makes you smile soon after you meet her.

“We can’t let life beat us down, girls,” she tells them in an inspiring manner that does not sound like a lecture. “The time has come to be fearless. We can still rev up our lives and get back in the game. But at our ages…we’ve gotta haul ass.”

Part of what keeps the play from being merely a string of one-liners is the depth the playwrights provide the characters in the form of monologues. Specifically, at different points in the play, the writers break the “fourth wall” and have each of the characters tell us more about themselves.

To the playwrights’ credit, the monologues do not interrupt the flow of the action. Rather, they logically follow the preceding scenes.

In The Savannah Sipping Society, you will meet, among others, Randa. She is a perfectionist and workaholic. Unfortunately, she loses her job as an architect. Therefore, she finds herself without much of a life and without an idea of how to obtain one. That is, until Jinx enters the picture.

The picture also includes Dot, a retired high school French teacher who is reeling from her husband’s passing.

Meanwhile, MarlaFaye also lost her husband, but he did not die. No, he left MarlaFaye to carry on with a 23-year-old dental hygienist – and the older woman is intent on righteous revenge.

Then, of course, there is Jinx. Her confident and carefree exterior might mask a lost, wandering soul.

Hamilton excels at lending Jinx a carefree, charming, elegant, and confident demeanor without making the character seem like a know-it-all. In addition, Hamilton nails her character’s vulnerability.

As it turns out, Jinx may not be the only character wearing a “mask.” In addition, Randa appears to be a confident, upbeat person. However, underneath that façade is an uptight, frustrated individual. In fact, in a split second, Randa can veer from happy to emotional. And an often-tense Aleman infuses Randa with unpredictability.

Other cast standouts include Bonilla, whose dark eyes blaze and voice thunders and sometimes growls as the boisterous MarlaFaye. Don’t mess with her. She can sure sound savage when she talks about exacting revenge against her cheating husband.

The character who undergoes the most significant emotional transformation is the frustrated widow, Dot. In the beginning, as Dot, Sussman’s wide, dark eyes and uncertain tone of voice convey an emotional fragility and even disorientation. You sense that Dot’s husband’s death has affected her. Eventually, though, a sense of joy and confidence overtakes Dot’s voice and body language. Certainly, we feel for her.

In a smaller role, Castro succeeds as a slow-moving Cordelia Covington, one of the characters’ grandmothers.

In a fine example of one theater company helping another, MNM Theatre Company handled the set design and construction. This Southeast Florida-based company (mnmtheatre.org) designs and builds sets in their Boca Raton warehouse.
The realistic-looking and detailed set mainly depicts Randa’s verandah, a roofed platform along the outside of her home in Savannah. The cozy-looking set includes inviting details such as flowers, pillow-style cushions for furniture, candlesticks, and a watering pot. Colors such as grey and brown add to the hominess. While the main action takes place in Savannah, one of the last scenes takes place in Paris, France. A simple change in the scenic design would have sufficed to indicate the change in locale.

Also, behind the scenes, Preston Bircher’s lighting design features bright colors befitting an upbeat comedy. In addition, Bircher deftly differentiates realism from non-realism. The latter comes when the characters deliver monologues, addressing us and breaking the “fourth wall.” During the monologues, the lighting is less intense, leaving the stage partly dark while focusing the actor addressing us.

While The Savannah Sipping Society does not break any new ground, it is a familiar, charming, often hilarious comedy about senior citizens relearning how to live life to the fullest. The play is sure to leave you feeling rejuvenated, and might even make you more mindful. And who cannot use a laugh or two or three nowadays?

Pigs Do Fly Productions’ mounting of The Savannah Sipping Society runs through Nov. 20. The venue is the extremely intimate Empire Stage, located at 1140 N. Flagler Drive in Ft. Lauderdale. Show times are 8 p.m. Friday and Saturday, as well as 5 p.m. Sunday. Tickets are $39 each. Use the code POSTCARD for $10 off regularly-priced tickets. For more information, and to buy tickets, go to www.pigsdoflyproductions.com or call (954) 678-1496.