Side Show Burns With Passion About Love Among Outsiders

Posted on February 4, 2013 by Bill Hirschman 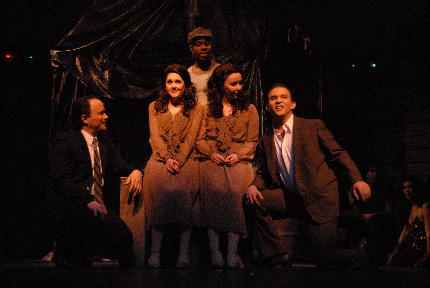 There is more passion pouring off the stage in Slow Burn Theatre Company’s thrilling Side Show than in ten other musicals we’ve seen in the past year put together.

That may result in one too many deafening power ballad after power ballad for some tastes and eardrums, but for those wanting to be touched by a poignant, but very dark tale skillfully delivered, Side Show is a powerful example of what the modern musical can be.

Slow Burn is a professional company that can only afford short runs because its founders are fiscally prudent. So if this interests you, make reservations now because this only runs Friday through Sunday of this coming week in west Boca Raton.

We said dark. How dark? The sung-through musical is a fictionalized biography of Violet and Daisy Hilton, real-life Siamese twins who sang and danced in side shows and later in vaudeville during the 1930s. Far from being a bizarre exploitation worthy of a tabloid, composer Henry Kreiger (Dreamgirls) and bookwriter/lyricist Bill Russell have created a heart-breaking depiction of how every human being searches for love – sometimes in vain.

From the first notes of  “Come Look At The Freaks,” a sardonic, mocking invitation from the denizens of a third-rate carny, Side Show aims at that twisted funhouse mirror that makes us see ourselves as emotionally wounded social misfits – a kind of very adult Wicked.

But its message is not Wicked’s uplifting empowerment. Side Show confirms that everyone harbors unfulfilled longings that, in our mutual pain, deserve compassion and empathy. Throughout, it calls us to see beyond surface assumptions about other people. Start with the fact that Daisy and Violet are not one person, but physically conjoined individuals with tragically divergent dreams; Daisy seeks fame and acclaim, Violet only wants a husband and home.

Plotwise, the show opens with the ambitious Daisy (Kaela Antolino) and the shyer Violet (Courtney Poston) as virtual captives in a sleazy show owned by the sadistically abusive boss (Conor Walton). Side Show doesn’t stoop to cramming two actresses into a single dress. They simply stand next to each other with their hips touching, occasionally holding hands to ensure they move as one.

The women are discovered by the warm-hearted music coach Buddy (Rick Peña) and worldly showbiz promoter Terry (Matthew Korinko). They secretly train the girls with hopes of buying them from the boss, overseen by the gentle giant Jake (Jerel Brown) whose side show job is to impersonate a feral African cannibal.

Eventually, the showmen wrest the twins from the boss’s clutches and set out to make the women stars of vaudeville. But Jake, who is hired as well, is secretly in love with Violet, while Violet is falling for Buddy. Daisy and Terry are clumsily wrestling with affection for each other, although Terry buries his feelings. No member of the quintet harbors many illusions. None trusts that any romantic attachment can end in anything but disaster. While the logistical problems of romance and sex are left to unspoken implication, they are all crippled with the belief that each is an outcast who will never be loved.

The ensuing algebra of human relationships provide peaks and abysses of hope and disappointment that climax when Buddy proposes to Violet, and Daisy is unable to get Terry to make a similar commitment.

Slow Burn specializes in contemporary musicals that few companies will attempt, certainly no one in Palm Beach County. But this choice by co-founders Korinko and director/choreographer Patrick Fitzwater is downright courageous. It’s a title that only theater geeks have heard of and even fewer have actually seen because its Broadway run in 1997 didn’t last three months. And yet the opening night crowd was once again larger than previous ones. Slow Burn, like the late Florida Stage, is becoming a brand name for dependable work independent of whether anyone is familiar with the actual show.

They have built a family of resourceful theater artists who have worked together now for three seasons. Its acting roster relies on a steady nucleus of performers augmented by a tidal roster of young developing talents who could not get such meaty roles elsewhere.

This particular cast is blessed with vibrant soul-stirring voices, but several shows elsewhere this season can boast voices as impressive. The troupe’s virtue is a passionate commitment to acting through the music, exuding heartbreak and hope without overplaying the angst.

Among the high spots are duets by the sisters, “Who Will Love Me As I Am” when their beaus balk, and “I Will Never Leave You” when they accept that they are each other’s only dependable source of love. These anthems of soaring melody lines and harmonies are carried to the rafters by Antolino and Poston like intertwining streams of silver liquid.

Equally mesmerizing is Korinko’s anguished solo “Private Conversation” in which Terry reveals that his pragmatic exterior is protective armor against feelings for Daisy that he is certain he cannot fulfill. Brown’s similarly scores with “You Should Be Loved,” sung to Violet when Jake realizes that Buddy is getting cold feet. Peña’s clarion voice struts through the vaudeville song and dance “One Plus One Equals Three,” which belies his growing concern that he cannot follow through on his proposal. Walton purloins the spotlight anytime his side show barker slithers across the stage with a muscular voice marinated in snideness. Even the ensemble is stronger than you find in many shows.

The music and lyrics span pseudo gospel to torchy cries of the heart. Kreiger gravitates toward those Dreamgirls blowout numbers to the point that an audience can overdose on the unrelieved wall of sound, but these songs dig far deeper into the soul. That is due to Russell’s hot and cold lyrics that range from witty to silly, prosaic to profound.  His libretto also seems to be missing something indefinable, especially in the second act. For instance, the initial driving conceit that the play is about outsiders seems to evaporate as the play goes on until it virtually disappears.

Fitzwater’s work, once again, is so smooth that almost no one will recognize the craft involved.  It’s easier to appreciate his eclectic choreography. With his leading ladies sitting still through much of the first act, he keeps his ensemble circling the twins. But once the women begin performing, Fitzwater finds modest but ingenious dance steps for them to do without seeming like contestants in a three-legged race.

How Slow Burn creates its evocative production values on such a tiny budget is baffling. Pena’s costumes range from the drab print dresses to tattered side show attire to sparkling Follies outfits. Ian T. Almeida’s set of canvas tent drapery and weather-beaten wooden slats are later covered (but never completely) by more elegant appointments of silken swaths. But the real triumph is Lance Blank’s artful lighting design that not only changes from scene to scene to create a different sense of place, but morphs with the emotional temperature changes within every scene. He even places lighting elements so that huge shadows of the characters are projected on the auditorium walls like flickering images on a prehistoric cave wall.

Musical Director Manny Schvartzman has coached the assured vocal performances and leads a six-piece offstage band that adroitly delivers Kreiger’s multi-genre score. Given the short rehearsal time and the need to triple on some instruments, the band deserves being mentioned by name: Schvartzman and Anthony Campisi on keyboards, Nick Trotogott on percussion, Greg Chance on guitar, Andrea Gilbert on reeds, and Wally McMurray on brass.

The production does have flaws. With exceptions, much of the cast doesn’t consistently execute Fitzwater’s choreography crisply or in sync with each other. The sound, which is crisper and clearer than it has ever been thanks to Traci Almeida’s work, still can’t keep some lyrics from melting into a muddle when the entire ensemble was singing.

But we’ve said it before: Every other musical theater producing house in Florida that prizes Carbonell Awards should be grateful that Slow Burn is so admirably cautious in its business plan that it doesn’t run enough performances to qualify for consideration. Because, frankly, they would blow most shows out of the water. Their productions like Side Show are a triumph of talent, intelligence and commitment.