Sidle Up To Side By Side By Sondheim At Stage Door 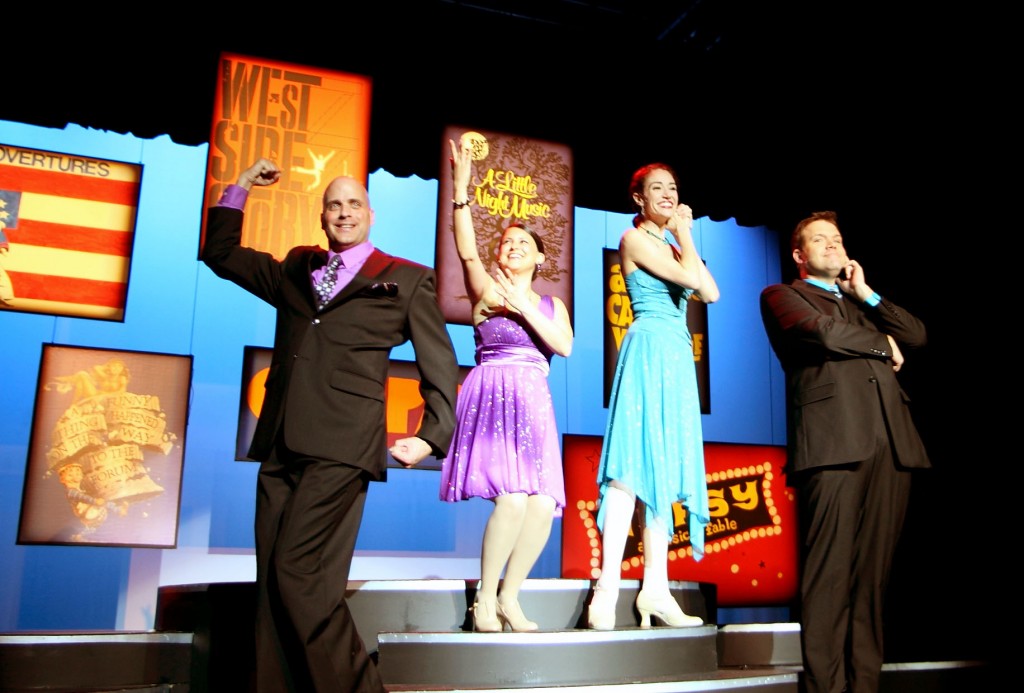 It’s rare for a theater lover to go to a production fighting off anxiety, but it happens when a troupe is tackling work that you revere. You want the company to succeed, but you fear no one can do justice to the show that you have built up in your head.

This critic worships the gospel according to Stephen Sondheim and knows nearly every beat of the original cast recording of 1976’s Side By Side By Sondheim. So there was cause for concern.

Thankfully, no such trepidation is called for in Miami Beach Stage Door’s production of the revue playing at the Byron Carlyle Theatre.

Sond-heads will savor this retrospective of his early and mid-career works lovingly offered up by a cast of talented singers under the staging of Kevin Black and musical direction of Caryl Fantel. But casual theatergoers will also appreciate his genius because the revue takes the numbers out of narrative and theatrical context; that highlights Sondheim’s technical skill, intellectual nimbleness and, contrary to reputation, the emotions simmering underneath.

The songlist draws from West Side Story and Gypsy (two shows for which he only wrote the lyrics), the cult flop Anyone Can Whistle, Do I Hear A Waltz, Follies, Company and A Little Night Music– depriving the evening of anything from Into The Woods, Assassins, Passion or his two masterpieces, Sweeney Todd and Sunday in the Park With George. Many of the choices reflect Sondheim’s career-long examination of the difficulty inherent in relationships — witty, brittle and pain-soaked inquiries imbued with his signature ambivalence reflected in his lyric from Company about marriage: “You’re always sorry; you’re always grateful.”

Yes, the cast stumbles over some notes, whiffs at a couple of pitches and bobbles some lyrics, not surprising with material this sadistically difficult. But Shane Tanner, Priscilla Fernandez, Don Stansfield and Lynn Wilhite are impressively capable and undeniably entertaining 95 percent of the evening. 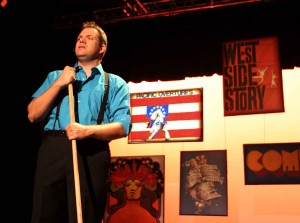 Tanner especially is a pleasure because his warm, expressive baritone excavates the dramatic meaning from what a less skilled person would deliver just as a cabaret ballad. His wistful “I Remember” from the ABC Stage ’67 television musical Evening Primrose (finally out on DVD) and “Anyone Can Whistle” are exemplars of delicate phrasing and how to put across a ballad without belting it. But he exhibits a wry streak in the acerbic “Could I Leave You” from Follies, similar to his comic portrayal of the vain soldier Carl-Magnus in Broward Stage Door’s A Little Night Music in 2009. He also carries those leading man looks with a light grace that makes him one of those actors you look forward to seeing in the cast roster of a musical.

The rest of the cast has its standout moments: Fernandez revels in the wry brothel madam’s song “I Never Do Anything Twice” pared down to almost nothing in the Sherlock Holmes film, The Seven Percent Solution. While she misses a few notes in the survivor’s anthem, “I’m Still Here,” Fernandez wrings out all the battered pride that Sondheim invested in the song. Even better, she nails the monstrously tongue-twisting lament of a terrified bride on her wedding day, “Getting Married Today” from Company.  She also does a serviceable job on Sondheim’s one standard, “Send In The Clowns.”

Stansfield is droll as the third Andrews sister in the female trio song “You Could Drive A Person Crazy” and as the sardonically dry husband in a rocky marriage “We’re Gonna Be All Right” from Do I Hear A Waltz (written with Richard Rodgers). But his voice wasn’t strong enough on “Marry Me A Little” or as one of the strippers in “You Gotta Have A Gimmick.”

Wilhite, still finishing her MFA at FAU, exudes a winsome engaging personality as she belts “Broadway Baby” and plays off her castmates in “The Little Things (You Do Together)” and “If Momma Was Married” from Gypsy.  She shows a lot of promise, able to reach the operatic highs of “A Boy Like That” from West Side Story. But she didn’t even try to hit bottom notes in other numbers which may have been wise if she couldn’t reach them. In the classic torch song “Losing My Mind” from Follies, she sang other notes instead and in “Another Hundred People,” she just spoke some lyrics.

Black’s staging is pretty straight-forward with actors strutting and strolling over steps and platforms in front of posters of Sondheim shows. Instead, he and Fantel have concentrated on ensuring a smooth presentation of the music. It would take an aficionado to notice, but they have cannily slowed the tempo of a few numbers just a whit to ensure that the glorious lyrics are understood. Fantel and Mary Anne Morro provide note perfect accompaniment on twin pianos.

The revue was first mounted in London, then to New York and became a regional staple. It scored with producers for being inexpensive to stage, and with audiences finally recognizing Sondheim as the pre-eminent musical theatre composer-lyricist of the post- Rodgers and Hammerstein era. Among its interesting conceits were assigning songs to men that were originally sung by women and, in two cases, inserting a man into numbers usually done by three women.

For those who ready to complain that such-and-such song wasn’t included, the show nears the finale with “Conversation Piece,” which doesn’t appear on the original cast album. The number cobbles together snatches of perhaps 25 Sondheim songs stitched together to resemble an ongoing conversation.

This production differs from some incarnations; it uses four singers rather than three, and all of them share the narrator duties previously handled by one non-singer. The copious Biography Channel narration has been pared down to simply present the songs in context and identify the original show if the source might be unfamiliar to the less obsessed audience members. A few songs have been cut: notably “Pretty Women” from Pacific Overtures and “There Won’t Be Trumpets” from Anyone Can Whistle (although it’s quoted in “Conversation Piece.”)

This show isn’t done often in South Florida. The last high profile production was the infamous one in March 2001 at Coconut Grove Playhouse that was ordered shut down when songs from post-Pacific Overtures shows were added without permission.

But Stage Door’s edition is a fine tribute that lovers of musical theater should luxuriate in.

Side By Side By Sondheim runs through Dec. 31 at Miami Beach Stage Door at the Byron Carlyle Theatre, 500 71st Street. For tickets and information, call (954) 344-7765 or visit www.stagedoortheatre.com.

This entry was posted in Performances, Reviews and tagged Kevin Black, Miami Beach Stage Door, Priscilla Fernandez, Shane Tanner, Side By Side By Sondheim, Stephen Sondheim. Bookmark the permalink.