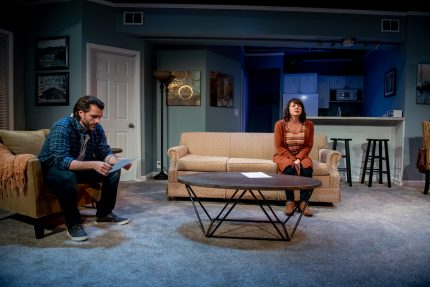 Matt Stabile and Niki Fridh struggle to reconnect in Theatre Lab’s To Fall In Love / Photos by Julia Rose Photo.

Despite two of the finest performances in what already has been a surprisingly benchmark season in South Florida, the most memorable player in Theatre Lab’s superb To Fall In Love is silence.

Not simply during the breath-arresting-but-we-won’t-spoil-it finale, but the silence reigning over the tense, tentative minutes of the opening scene and employed regularly throughout the evening by director Louis Tyrell and actors Matt Stabile and Niki Fridh.

The silences eloquently communicate fears and feelings as trenchant as the equally pungent verbiage in Jennifer Lane’s moving script as her protagonists grasp at trying to reconnect. The couple know that everything, anything they say likely will cause pain to their emotionally raw and ravaged nerve endings.

To describe the premise might unfairly downplay the work to seem like a Lifetime movie of the week. But trust that Lane’s solid script is elevated into unalloyed drama by Fridh, Stabile and Tyrrell instilling three-dimensional flesh, blood and emotional anguish onto Lane’s foundation.

It’s difficult not to give away too much because Lane intentionally only lets us know bit by bit the underlying troubles as well as the characters’ backstory, but we’ll try. Wyatt and Merryn are a married couple in their 30s who still love each other to a profound depth. But they have separated in the wake of a deeply traumatic tragedy that they will never be able to put behind them.

Wyatt is a respected literature teacher and a frustrated poet from a wealthy suburban background. She is an office manager from a relatively rural background who feels she has done nothing with her life. They met in college where they forged the kind of relationship most people yearn for.

Wyatt, who still wears his wedding ring, has begged Merryn, who returned her ring, to come to his new apartment for one last try to reconnect as they face the abyss of a final breakup.

In a bit of a dramaturgically mechanical device, they will take a 36-question form published in the New York Times (really). The test created by a psychologist is meant to reveal character of two people who wonder if they can fall in love with questions as blasé as  “Would you like to be famous?” and as revealing as “I wish I had someone with whom I could share….”

Some answers simply repeat what both know about each other, but those lead to fond reminiscing. Some questions are an incisive razor unearthing aspects each did not know. Many rip back open the ragged scars from the traumatic event – often leading to neither actually answering a question because it ventures into tortured ground. And thus the silence.

In the hands of Tyrrell and the actors, the ultimate decision is never a foregone conclusion. The depth of damage, the walls erected, may be insurmountable. Love – true, undiminished and unending — still may not conquer all.

Of course, it helps that Fridh and Stabile, who is the company’s producing artistic director, are married. But truthfully, they have proven themselves over and over separately as among the most effective actors in the region. Their varied naturalistic line readings, their body language and above all, volubly expressive faces make the most of this space in which the audience is virtually sitting in Wyatt’s living room.

Lane, who premiered her Harlowe in 2019 at Theatre Lab, writes credible dialogue of two people who know how their partner will finish their sentence. But she gives each scorching arias that Theatre Lab’s trio do full justice. In a series of scenes late in the evening, Stabile and Fridh rip their guts out revealing for the first time the couple’s most deeply buried feelings of crippling guilt and blame.

At one point, Lane’s Merryn unreels a memory: “I would hug you extra long to see how long I could get away with but you never pulled away first. Never. You would stand there and you’d let me lean my head against your chest, and on good days you’d hum, and I could feel the music vibrating through our bones, and on the bad days, it would just be quiet, and we’d stay like that until I was strong enough to let go. And you called me beautiful like it was my name, and you brought me flowers on the first of every month, and I stopped feeling like, what did you call it? A ‘black hole of need.’ Because you filled me up. So what roles do love and affection play in my life? They were everything to me.”

Lane enhances the contemporary feel of the play with references to Domino’s pizza and Marryn’s common compulsion to look up the answer to something on Google. Someone thought to include a COVID mask on the refrigerator so Wyatt can pay off the delivery man safely.

Tyrrell is a past master at this kind of intimate work with a tiny cast; remember his helming of the two-character Lungs in 2013 at Arts Garage. But fortunately both his actors are so inherently engaging because in this shallow, intimate venue, audiences on one side of the tiny theater can’t always see the face of one actor keeping essential eye contact with the other.

This has been so amazingly strong a theater season to date that you might second-guess if we’re all just happy to be back, but To Fall In Love is inarguably an evening not to miss.

COVID Protocol: All patrons regardless of vaccination status are expected to wear masks while indoors in any FAU facilities. (In fact, on opening night several people did not, including a couple on the front row.) Anyone exhibiting flu-like symptoms (coughing, fever, shortness of breath) will be asked to leave the venue. Most people need to show their previously purchased tickets on their cell phones to be scanned by the ticket takers. Playbill information is found by your cellphone scanning a QR Code on the walls.

To Fall In Love runs through Dec. 12 from Theatre Lab is performed at the FAU campus in Boca Raton.  Performance times are 7:30 p.m. Thursday-Saturday, 3 p.m. Sunday. No show Thanksgiving Day.  Running time 1 hour 20 minutes with no intermission. General admission tickets are $32-$40, with special rates for FAU students and faculty, and donors. A service charge of $2 applies to all in-person and over-the-phone orders (excluding all FAU students). For more information and tickets, visit https://fauevents.universitytickets.com. Or call (561) 297-6124