Maltz’s Singin’ In The Rain Sure Dances Up A Storm, But It Doesn’t Touch The Soul 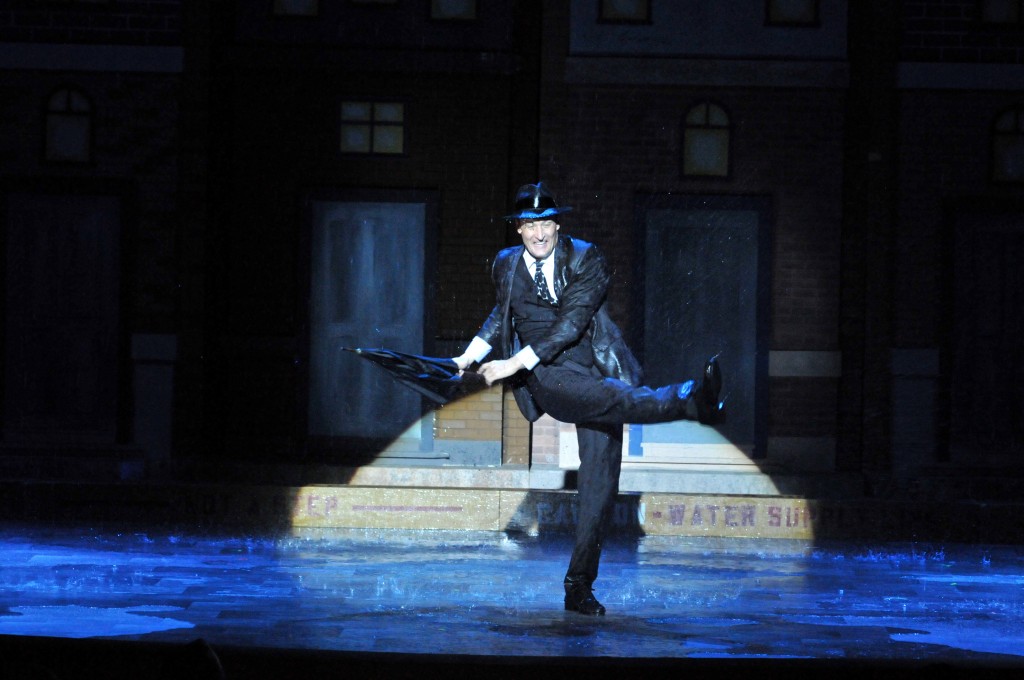 One of the Maltz Jupiter Theatre’s enviable problems of being one of the finest producers of mainstream musicals in the southeastern United States is that it sets the bar of expectations almost unrealistically high.

Assuredly, the Maltz’s Singin’ In the Rain is a pleasant, skillfully executed, beautifully produced evening of cotton candy entertainment. No one for several hundred miles around mounts such gem-polished, well-heeled works of musical theater.

The asterisk is that this Singin’ In The Rain has no soul. It’s a funny, diverting, two-dimensional cartoon whereas the quintessential Hollywood musical stirred in emotions along with the yuks and terpsichorean feats. For all its artifice of people breaking into song and dance, the 1952 flick had that faux film reality that enabled you to root for the lovers. That’s missing in this stage version that seems like a series of expertly staged Follies numbers.

If this sounds like the Grinch stayed an extra few weeks, recall the iconic film sequence in which Gene Kelly as the film actor Don Lockwood expresses his unalloyed joy at being in love by cavorting in a “real” downpour on a “real” residential street. We are eavesdropping on a human being whose emotions are so overwhelming that he must dance to convey them. The ecstasy that he feels and engenders in the audience even on the umpteenth viewing is still pure hallelujah.

But in this edition, Don – bemused by amour rather than lovestruck — is on a Hollywood soundstage playfully toying with a new rainmaking machine. But more telling, the actor is playing directly to the Maltz audience as if he was performing a vaudeville number. He destroys the fourth wall by intentionally and impishly kicking water into the laps of the audience in the first row who have been equipped with Maid of the Mist ponchos. Now the number isn’t rapture, it’s a showstopper.

This stage version originated in London in 1983, was heavily revamped for Broadway in 1985 and revived in England several times. The result is a faithful recreation of the film. Original screenwriters Betty Comden and Adolph Green rewrote their rib-poking script for the stage, and they kept the glorious score of Nacio Herb Brown and MGM musical guru Arthur Freed (almost all of it recycled from their earlier films).

The plot follows the seismic shift when silent flickers gave way to “talkies.” The superstars of a series of romantic swashbucklers at Monumental Pictures, Don Lockwood (Curt Dale Clark) and Lina Lamont (Emily Stockdale), suddenly must try to face adapt to the new technology of digital film and CGI, sorry, I mean talking pictures. Lockwood has little trouble, but the tyrannical Lamont has a voice that sounds like nails scraping a blackboard. Cosmo Brown, the studio piano player and Don’s former vaudeville partner (Brian Shepard), suggests that Lina be dubbed by the lovely low-ingénue-on-the-studio-totem-pole Kathy Selden (Lauren Blackman), which is fine with Don since he has fallen in love with her, not so good since the self-deluded Lina sees Kathy as romantic competition.

The score gives the silver-throated Blackman the chance to send her voice soaring through numbers like “”Would You” and “You Are My Lucky Star.” It also gives Clark and Shepard a chance to hoof their way through some impressively athletic numbers like “Moses Supposes.” All three shine as a unit in the glorious dance trio “Good Morning,” perhaps the best number in the show.

Director Marc Robin moves the production briskly and everything runs as precise as the proverbial Swiss watch; it should since this edition ran last month at the Fulton Theatre of Pennsylvania (a co-producer that jointly mounted The Sound of Music with the Maltz). But Robin also gets the blame for the slightly flat, unconvincing aura.  Not a single character in the cast seems to have a genuine chemistry with anyone else.

On the other hand, his energetic choreography is impressive, especially in the multi-part fantasy for “Broadway Melody” including Don’s slinky pas de deux with Alison Manning standing in for Cyd Charisse. Robin slyly quotes classic movie musical moves such as the dancer lifting her leg high into the air while twirling, carrying a swath of skirt into the air. He even pays homage to the classic dance moves from the original film such as the finale of “Good Morning” in which the three amigos step onto the back of a sofa, upend it and then land on their bottoms in happy exhaustion.

One problem comparing this to the film is that the 1952 cast was the proverbial lightning in a bottle that would require a miracle to equal. Clark is a fine dancer, a serviceable singer, a charming personality and a barely passable actor. But he’s a musical comedy performer with a slightly goofy demeanor. Gene Kelly looked like your plumber, but Clark’s persona seems more like a top banana than a leading man. Audience members will give him a standing ovation for his skill, but none will want to take him home with them.

The lovely Blackman is far more affecting because she plays her part as if the stakes were real, plus she has the one pure voice in the company. Shepard makes a fine sidekick and dances with as much energy and verve as anyone can ask in his baggy pants solo “Make ‘ Em Laugh.”  But he doesn’t have the charisma that elevated Donald O’Connor to star billing in the film.

Stockdale, bless her, is a stitch with those kewpie doll looks belying a conniving personality, although that glass-cutting voice gets a little old the fifth time she screeches, “What am I? Dumb?”

As always, the Maltz’s taste and talent are evident. Particularly notable are the spangled gowns, pressed tuxes, plumed hats and other wardrobe from a Jazz Age closet. The costumes are mostly rentals, but they were carefully chosen and coordinated by Anthony Lascoskie Jr. to evoke Gatsby-esque lushness and vivacity. Kudos are also due the multi-layer lighting design of Paul Black. Sound designer Marty Mets has created some nifty moments such as the sound of a fluttering movie projector emanating from the back of the Maltz auditorium whenever Don and Lina’s movies are shown on the on-stage screen.

The titular rain effect is, indeed, a pretty impressive downpour to soak dancin’ Don as he twirls his soggy open umbrella in the audience’s faces. If you’re sitting in the first three rows and the ushers offer you the poncho, take it. Don’t worry whether it clashes with your ensemble, just put it on in time for the end of the first act.

A nine-piece pit band led by Musical Director Aaron McAllister is note perfect and exudes that brassy sound essential to put across the score.

Bottom line: This Singin’ In The Rain is entertaining, which is all most people are looking for, but you won’t believe any of it for ten seconds like you did in the Maltz’s captivating reboots of Hello, Dolly! and The Music Man.

This entry was posted in Performances, Reviews and tagged Maltz Jupiter Theatre, Marc Robin, Singin' In The Rain. Bookmark the permalink.