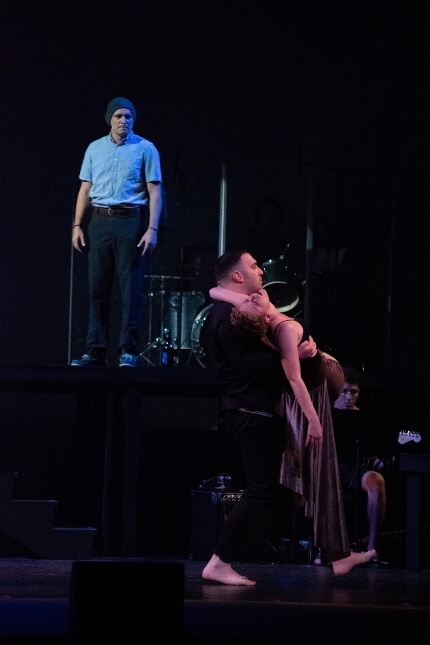 It doesn’t matter how beautifully these performers sing with strength and skill in complex harmonies, no matter how tight the live band is, no matter how much energy flows off the stage, if a musical is primarily a song cycle reliant on storytelling, you have to be able to understand the lyrics.

Measure For Measure Theatre’s production of 35mm, indeed, has all the above strengths and virtues, but tragically the audience last Sunday afternoon could not understand two-thirds of the words.

Any time more than two people were singing, the lyrics were unintelligible. Any time the band was playing anything louder more than a quiet accompaniment, the words were lost even with only one person singing. This critic, just to make sure the problem wasn’t his hearing, confirmed the problem with two other Carbonell nominators in the audience.

It was everyone’s loss because when one person sang and the music was intentionally dialed back to be contemplative, the cast’s voices and Ryan Scott Oliver’s lyrics were worthy of hearing. But whether it was the sound mixer or the acoustics in Spanish River Community High School or even enunciation, the overall reaction was frustration.

35mm, A Musical Exhibition, is a 2012 song cycle of disconnected numbers, each based on photographs by Matthew Murphy – sort of like strolling through an art gallery a 21st Century cousin to Mussorgsky-Ravel’s Pictures at an Exhibition.

Reviewing a 2015 production by Evening Star, we wrote, “Oliver’s music, which is studiously eclectic – edgy rock, bittersweet ballads, love songs, nightmarish anarchy, hill country folk music, even a modern riff on an a cappella church hymn. Some are melodic, some dissonant, sometimes both in the same number. Some are droll like ‘Caralee’ about a male babysitter with an assignment from hell and ‘The Ballad of Sara Berry,’ a wicked riff on a nasty prom queen. Some are heartfelt like ‘On Monday.’… The individual songs… are so blithely disconnected that it is hard to perceive an overarching theme other than a kaleidoscope of snapshots of jangly urban life that you might find on someone’s Iphone.”

That pretty much nails the content. The music is engaging, but that’s only half of the elements that Oliver fused together. When you have to guess at the story and message through the music and the on stage movement, the production is crippled.

Measure for Measure is a fledgling company with minimal resources but considerable courage and an admirable bent for challenging youth-oriented work.

Its first production last May, delayed by Hurricane Irma, was a startlingly strong Next To Normal (co-produced with Infinite Abyss) featuring memorable performances by Sabrina Lynn Gore, Johnbarry Green and Christopher Alvarez who appears in 35mm.

As then, the evening is capably directed by co-founder Damien J. Matherson and features choreography by Kelly Johnson (including crisp, evocative dancing by Sara Rose).

They have earnest colleagues to work with: Eytan Deray who has proven his talent in Slow Burn shows like Spring Awakening, Ernesto Gonzales, Stephanny Noria (also memorable in Spring Awakening and other Slow Burn shows), Allyson Nicole Ryan in a small cameo, Johnson and Alvarez.  The dance corps is Armando Hernandez, Genesis Perez, T. Brandon Hall and the aforementioned Rose.

Later this season, they plan Christopher Durang’s viciously funny farce about terrorism, Why Torture is Wrong and the People Who Love Them, in November; and then Bare: A Pop Opera in March, and Murder Ballad in April – in various locations.

There is promise in this company, but it’s difficult to discern in this outing.