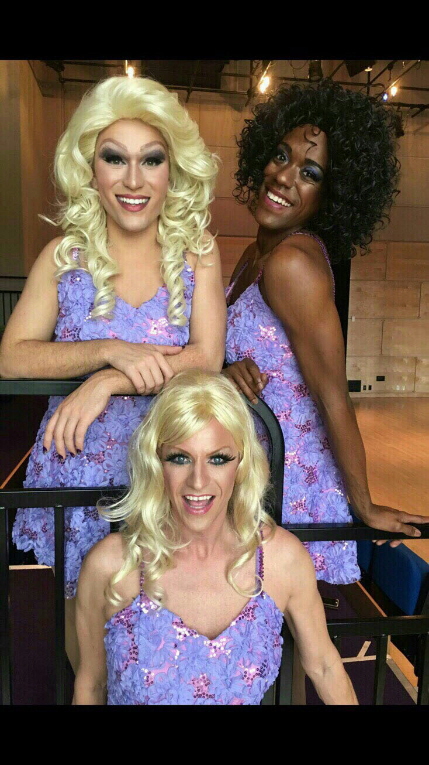 A palpable joy suffused La Cage aux Folles in 1983 as a group of drag queens proudly proclaimed their proclivity for the first time in a mainstream Broadway musical.

That same joy emanates three decades later from the musical Diva Diaries as it focuses on a trio of entertainers who started their careers about the same time as La Cage. But the erosion of time has accumulated angst, baggage and anxiety in these 50-plus performers.

So Diva Diaries, set on the eve of their last performance in their home venue Pandora’s Box, is a melding of exuberant cabaret numbers, witty bitchiness, sex-tinged humor, but also rueful introspective musings of past losses, sad origins, fear for an uncertain future and an end-of-an-era melancholy. As they reminisce, images of their younger selves materialize to perform scenes from their youth.

It’s an intriguing idea by conceiver/librettist Andrew Kato and co-book writers Jem Jender and composer-lyricist John Mercurio who aim to celebrate the glorious release of a drag show and the heart of backstage drama. Kato, producing artistic director at the Maltz Jupiter Theatre, and Mercurio have co-written five other shows including the acclaimed Academy.

But their latest rewrite of the 2003 show at the Broward Center directed and choreographed by Ricky Nahas lands inconsistently – sometimes entertaining or moving, other times feeling thin, perfunctory and artificial. Both the positive and the negative are due to the production, the direction, the acting and to some degree even the material.

But the true quality of the show was crippled by the sound quality in the Abdo New River Room, the facility’s original catering event hall upgraded into a performing venue. About a third to half of Mercurio’s lyrics and a percentage of the dialogue were unintelligible. We’re guessing the room was not designed for this purpose and numerous shows have had this problem, so the blame should not necessarily rest on the show’s sound designer. But not every show has this problem. Last season’s 25th Annual Putnam County Spelling Bee and this season’s Thrill Me seemingly nailed the sound issue – although we were sitting in the center of the house for those shows and we were off to the side for Diva and others.

Further, some of the actors didn’t enunciate clearly. Being in a headlong rush to snap out lines, they mistook speed for wit.

Finally, the digital musical tracks nearly drowned out the singers. That problem was crucial because the accompaniment held little of the songs’ melodies; the singers were expected to carry that. So when the melody could not be heard – which was often – it was hard to assess the score.

We’re devoting so much space to the sound because it makes it very hard to accurately assess the material or the production itself, other than the fabulous array of Jenna Hoefert’s costumes – both the high drag and the prosaic backstage dressing room garb.

And yet, the score has some rousing cabaret numbers and heartfelt ballads. Crucially, this production often wins over the goodwill of the audience even when the show is falling flat because everyone on stage seems to be having an infectiously good time.

The script is filled with that rapid-fire arch repartee you’d expect. The leader of the trio says he feels “one part Mildred Pierce, two parts Mary Poppins.” The would-be actor says, “They say I have charisma,” to which a buddy answers, “A little penicillin with straighten that out.” When talking about dreams, one says, “I just want to have two great hair days in a row.”

But there are lines drawn from the heart of people who found that following their instincts has been fulfilling instead of life-denying: “Drag saved my life.” “I finally like me.” Drag is “about power.” “I’m not a freak, I’m a goddess.”

With the club closing and their futures terribly uncertain –they will never find a nurturing haven like this one – the authors posit that the trio find strength in their sisterhood (after tearing each other down for 90 minutes) and some amorphous hope because their sisters have found worth in each other. This will be seen by some people as an uplifting climax or others as an illogical contrived finale.

Brian Padgett plays the leader Cleareen, a tall, broad-shouldered man with a pronounced gut, represented in his youth by David Vogel, a stunning leggy redhead with a 1000-watt smile. Johnny Butler is Damsel (as in Damsel In Distress), a refugee from a rural Georgia trailer park who relied on his undeniable beauty, played in his youth by Keagan Tanner. Jason McCollum is Randee, a supposedly straight African-American with tattered dreams of a legit stage career, played in his youth by Ryan Brown.

The younger trio do some book scenes, but mostly they have to perform music, so what matters is that they exude charisma and panache in their spangles and past-the-shoulder wigs like a waterfall of curls.

But the older group, who also have many songs, have to carry the weight of the drama. In that, all three are barely passable and rarely believable. Some of it is their variable acting ability; some of it is delivering a herky-jerky exposition-heavy script and a set of too predictable backstories of how they discovered their love for drag.

Still, the show itself has some solid virtues. One of the most effective was providing the divas’ younger selves to illustrate the passage of time and especially the shortfall of ambitions. It echoes Michael Bennett’s staging of “The Mirror Number” in Follies by juxtaposing the time-worn present day trio with their wrinkled faces and swelling bellies against the fresh-faced ingénues.

And the opening lands perfectly: Three vibrant young men dressed in high drag prance onto a runway singing a disco song as an announcer welcomes the crowd to a New Year’s Eve celebration in 1985, then it segues to the same trio in different gowns for New Year’s Eve 1999, and then the announcer tells us it’s New Year’s Eve 2008. This time we are serenaded by the three much-the-worse-for-wear entertainers. Finally, we are in the present as the three repair to their dressing room on the eve of the final night.