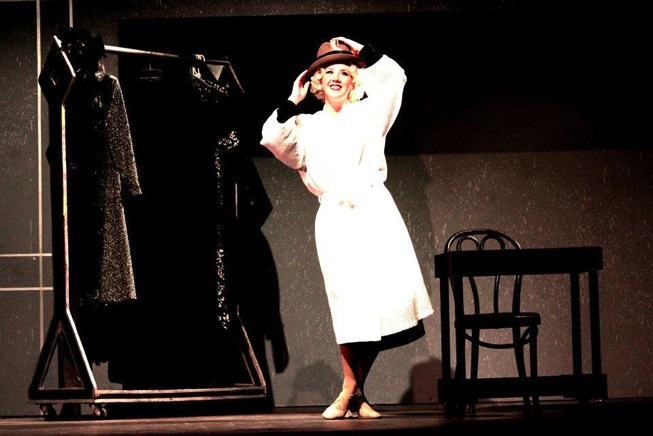 “There are no second places in show biz,” says Ginger Rogers’ mother, Lela, in Backwards in High Heels: The Ginger Musical. But the young Virginia Katherine McMath, who later changed her name to Ginger and borrowed her last name from her stepfather, didn’t need that advice. Even at 15, Virginia was determined to be a star.

Broward Stage Door Theatre in Coral Springs presents a super-energized rendition of the nostalgic musical that follows the life of the other half of the Astaire-Rogers dance duo, from the teenaged Virginia winning a Charleston dance competition that put her on the Orpheum circuit in 1926 to Ginger’s Oscar win in 1940 for a dramatic role in Kitty Foyle. But Backwards also needs something to hang a cornucopia of early 20th century popular songs on, so it builds a story based on Rogers’ personal life: a tug-of-war, love-hate relationship with her mother, failed marriages (five of them), and her fearless managing of her own career.

Backwards had its world premiere in South Florida in 2007 at the now defunct Florida Stage, conceived and developed by Lynnette Barkley and Christopher McGovern. It has been performed around the country since, but Stage Door embraces its tap-happy beat to put on a production that feels genuine to the core.
Kelly Skidmore as Ginger is nothing short of spectacular. She glows on stage from the moment she arrives in the opening number with the rest of the company for the rousing Gershwin ditty “Fascinating Rhythm,” which quickly propels the production into high gear.

Then it’s on with the show as the story of young Virginia begins. She’s itching to enter a local Charleston dance competition, but her mother, a former Hollywood scriptwriter who has distaste for Tinseltown, forbids her from going. Headstrong and determined, the teenager just can’t “Tame These Feet.” Skidmore shows her meticulous dancing ability with some snappy choreography by Yoav Levin that has her tap, tap, tapping around every inch of her bedroom, right down to the footboard on her bed for the rollicking second number of the show.

From here, things continue to take off thanks to Dan Kelley’s swift direction that keeps everything moving on point so that the show never misses a beat. Add to that a live orchestra set above the action that adds even more energy. The trio is one of the hardest-working bands seen on a local stage — musical director David Nagy on piano, Martha Spangler contributing rich, deep sound on stand-up bass, and Julie Jacobs keeping time on drums.

Skidmore, in her first starring role at Stage Door (she was previously seen in last year’s Mame and 2010’s Mack and Mabel), commands the stage, acing the ebbs and flows of the part, showing absolute depth as the role gradually moves from innocent ingénue to acerbic demanding star. Just as fetching is Kate Scott as Ginger’s mother, Lela Rogers, who plays the Mama Rose-esque part with a cool confidence. In Act II, her treatment of the ballad “You’ll Never Know” is so perfectly rendered it reveals true heartbreak.

The show calls on the ensemble to wear a number of different hats and there isn’t a weak link in the bunch.

For unlimited comic relief throughout, Nicole Davey has the most fun playing a veritable cast of characters including Ethel Merman who takes on Rogers in a tit-for-tat “I Got Rhythm.” During a party scene, Davey’s quick change ups as Bette Davis, Marlene Dietrich and Katharine Hepburn are wonderfully defined and comically spot on. She’s equally convincing in drag as Rogers’ Husband No. 4 Jacques Bergerac in one of the show’s most entertaining numbers, Change Partners.

Jake Delaney is dashing as Fred Astaire and certainly has his work cut out for him to keep up with Skidmore, while keeping track of his other ensemble bits. Ryan Patrick Lingle is Rogers’ Husband No. 1 Jack Culpepper dueting with Skidmore in a sweetly harmonious “Embraceable You.” He also plays Jimmy Stewart. Jonathan Van Dyke takes on a number of different roles, too, but he’s a stand out in the tuneful “Let’s Face the Music and Dance” that he shares with the two leading ladies.
The black and white set serves as a perfect celluloid inspired backdrop while Jerry Sturdefant’s costumes evoke the glamour of the time period. The costumes are constructed to sway and move in the dance numbers, adding yet another element of beauty to Levin’s stunning choreography.

While Barkley and McGovern’s story travels a predictable road, there’s no denying it’s a musical gem. Stage Door’s Backwards in High Heels gets five stars for being a true original.