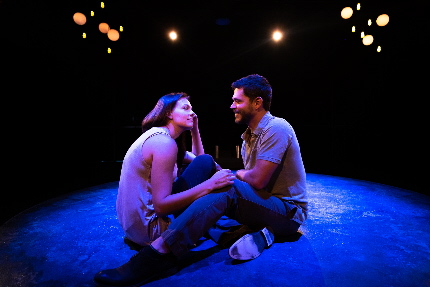 It’s almost paternalistic to praise New City Players as one of the gutsiest theaters in the region. But with its carefully-wrought and moving production of Constellations, the Players have outgrown the well-meant but limited expectations that arts patrons have of a so-called “fledgling theater.”

Anyone who saw GableStage’s 2015 production with Joe Adler directing Katherine and Antonio Amadeo knows what a transcendent but hellishly problematic script Nick Payne wrote, and why New City’s team should be proud of its mastery of the challenging material.

How challenging? Take a deep breath. The basic plot tracks the familiar evolution of a relationship of two young Brits: Roland, a beekeeper, and Marianne, a university cosmologist. Like an omniscient God or a scientist looking through a microscope, we watch their meeting, courtship, romance, breakup, marriage and then a tragic left turn.

But the driving premise is that an individual’s life is not the single arc that we are conscious of. It is only one of an infinity of parallel arcs occurring simultaneously in which a single fork can produce a limitless array of paths for the very same people. They are living those lifetimes in separate universes like endless echoing reflections in a funhouse hall of mirrors. A marriage proposal can lead to acceptance, rejection or a sidestepping by the same people.

But Constellations is not conceived of as science fiction so much as a philosophical contemplation of the endless possibilities of humans’ destinies, and a single embrace of how all those destinies reflect the entire breadth of human experience.

Dramaturgically that requires two actors to perform the panalopy of emotions usually distributed among a dozen stories limning relationships. They are fused into a kaleidoscope of scenes sharing similar dialogue but paraded back and forth across space and time with different outcomes – scenes separated only by a flash of light and a whoosh of sound as we whisk instantly from one dimension to another. Highly episodic, sometimes a scene lasts a few minutes, sometimes only a few lines of dialogue.

Just to make things more difficult for the actors, director and audience, sometimes scenes play out of a linear time progression and make little sense – until late in the play when these fragments coalesce into a heartbreaking finale.

At a climax, Marianne the scientist says to Roland, “The basic laws of physics don’t have a past and a present. Time is irrelevant at the level of atoms and molecules. It’s symmetrical. We have all the time we’ve always had. You’ll still have all our time.” Trust us, it’s a heartbreaking declaration in context.

Payne’s deft and insightful script is incredibly difficult to master. It has no setting, no emotional cues in parentheses, only a few handfuls of stage directions – little but dialogue and a line dividing each scene. The experienced Amadeos said they never had the show under control until just before opening night.

But the commitment and nimble craft of actors Jessica Schulte and Jordon Armstrong, molded ever so precisely by director Mary Elizabeth Gundlach, make the 65-minute journey emotionally engaging. They realize that the play is about people rather than the intentionally confounding invocations of Einstein’s relativity discoveries, string theory and quantum mechanics. Don’t worry: Understanding the science is no more crucial than Scotty’s explanation of impulse power with dilithium crystals on Star Trek.

Gundlach and assistant director Krystal Millie Valdes have calibrated the show so well that their work is invisible, even though there are no furniture or props. Therefore, the varied placement of two bodies is crucial to illustrating the changing emotions and dimensional shifts – especially since the audience sits on all sides. In some cases, the couple ends one scene clasping each other in the throes of one emotion, then start the next scene still in that clasp but awash in a different emotion.

Gundlach also deserves credit because while GableStage’s production was stunning, New City Players’ seemed far easier to follow. Part of that may be because we who saw it before knew what was happening, but also because company co-founder Timothy Mark Davis gave a curtain speech opening night that laid out the basic parameters.

Obviously, this requires two 20-something actors with something special. They must flash from emotional moment to moment in a millisecond – an inescapably constructed theatrical device – while never losing the audience’s suspended disbelief that they are watching a naturalistic portrayal of real people. 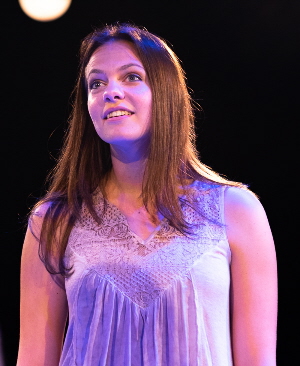 Acting chops aside, it helps that Schulte and Armstrong exude a winning likeability and are quite attractive in a quiet way. They also have the requisite chemistry, which in keeping with the play, seems naturalistic as well, rather than dramatically electrifying.

Schulte, who serves as the company’s literary manager, is a revelation.  She directed New City’s Twelfth Night and Art, and although no novice on stage, this is her local acting debut. Her skill and credibility at inhabiting someone recognizable whom you care about makes her someone worth seeking out in any show going forward. 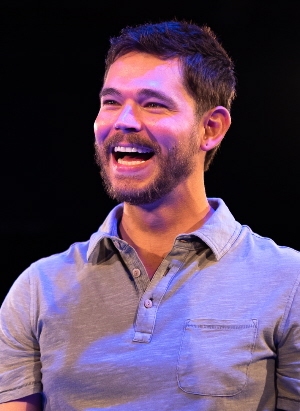 Armstrong, first seen at FAU-based shows, had the lead in solid professional outings such as Slow Burn’s Peter and the Starcatcher and disasters such as Island City Stage’s The Radicalization of Rolfe.  But here, the charismatic young man with smoldering eyes and a winning boyish smile, finally gets a role that illustrates great promise as a dramatic actor. Sometimes the British accent adopted for the role gets in the way of his enunciation and some lines are muddled. But he handles the lightning spins from emotion to emotion with absolute credibility.

Presented in the agile black box theater at Vanguard Sanctuary for the Arts in Fort Lauderdale, the set by Ryan Maloney is simply a round raised platform painted in marbled blues like Earth seen from outer space or the universe itself. Candelabras stand in for stars. But lighting designer Joel de Sousa and Davis as sound designer ably provide an endless array of visual and aural cues each time the story switches from one plane to another and back again (overseen by Technical Director Alyiece Moretto-Watkins and Stage Manager Megan DeGraaf.) Davis in particular sets the mood with an almost constant emotional underscoring of skittering, tinkling and hypnotic piano and string music.