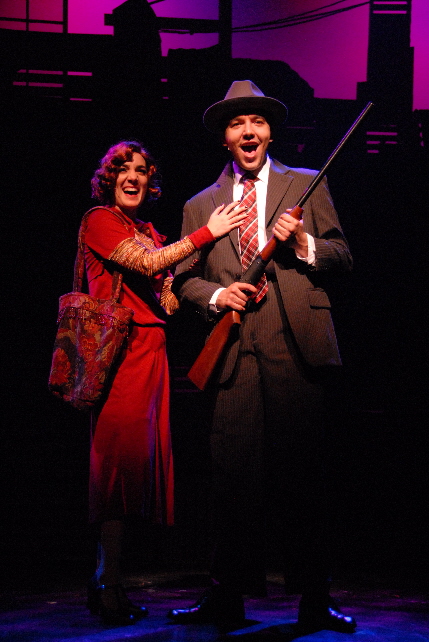 For all the Frank Wildhorn-patented power ballads and the gospel roof-raising production numbers, the musical Bonnie & Clyde is a simple straightforward love story.

Okay, it’s a love story set against the desperate depths of the Great Depression and it’s a love story punctuated by gunfire, but it’s almost a star-crossed Romeo and Juliet tale except that the doomed lovers rob banks and kill people. Two very sexy young people find their soulmates, defy societal convention and end up paying with their lives.

But once again, Slow Burn Theatre Company has found the strengths in a “troubled” work and forged an entertaining even intermittently thrilling work. Enhanced immeasurably by four memorable performances, director/choreographer Patrick Fitzwater and his creative team keep nudging upward their level of quality and polish without sacrificing their commitment to tackling edgy, difficult work that few would attempt.
`
There are flaws and shortcomings in the underlying show by Broadway maverick composer Wildhorn (Jekyll & Hyde), lyricist Don Black (Sunset Boulevard) and bookwriter Ivan Menchell (who?)

For instance, the tale lingers a bit too long when the entire trajectory is as clear cut up front as a .45 caliber round – specifically, the love story is as schematic as a fairy tale and the opening tableau shows their bullet-ridden bodies sprawled across their jalopy. So even if you did not see the fabled 1967 film, you know where this is going.

And while this is Wildhorn’s least indulgently overblown score – a compliment of sorts — Black’s lyrics and Mentchell’s book range from competent to banal.

That said, Slow Burn’s production eclipses the faults with an exciting, aforementioned thrilling evening whenever the sensuous Bruno Faria and the sultry Jessica Brooke Sanford are musically proclaiming their devotion, passionately necking or just exuding adoration as if their eyes were laser-powered searchlights.

The musical, which bears as little resemblance to the film as the film did to reality, picks up our couple as children when Bonnie Parker dreams of being a movie star like Clara Bow, and Clyde Barrow dreams of being Billy The Kid or Al Capone – both of whom he equates with being latter day Robin Hoods.   Those sustaining dreams only intensify when they both grow up in rural west Dallas. Bonnie (Sandford) becomes a waitress in a dead-end café and Clyde (Faria) becomes a small-time crook robbing mom-and-pop stores with his brother Buck (Christian Vandepas) to the dismay of Buck’s wife Blanche (Kaela Antolino), the only one of them with a developed conscience.

The financial and emotional Depression awash with corruption, inequity and evil grinds down everyone around them into a walking death. So Clyde and Bonnie’s ambitions to etch their names in the public consciousness shine so brightly that the two cannot miss each other in a crowd.

Clyde says he will take Bonnie to Hollywood, robbing a few stores along the way to pay for the trip. But when he is caught and given what, to him, seems an unjustly harsh sentence in a nightmarish prison, his boyish good humor evaporates and his resolve hardens.

Bonnie breaks him out of prison. But their journey takes an irrevocable turn when Clyde shoots a police officer in a grocery robbery and then a clerk in a bank wiped out by the economy. Clyde sees each as a kill or be killed situation, but the innocence of their odyssey is over and they know the closing forces of the law will eventually doom them.

In Arthur Penn’s film, the duo are anti-heroes rebelling against society with a nose-thumbing attitude intentionally heedless of any consequence in the future. The musical focuses on two flawed souls trying to find validation through fame and who know subconsciously that no one ever wins. Instead, they will savor the one joy life gifts them with, true love, while they can.

The minor miracle here is that the Wildhorn-Black-Menchell material itself, the entire cast and the direction make this predestined arc credible. The audience may not want to actively emulate the pair, but they can understand their mindset, maybe secretly admire their freedom. On top of the congenital foolhardiness of youth, songs like the sardonic “Made In America” illustrate that these social conditions birthed people who feel  hypocritical society’s betrayal means they owe nothing to anyone except to take back something to satisfy themselves.

Since the arc of the story is so short and direct, Wildhorn and company have clumsily padded the show with classic Broadway filler such as a cute, funny but totally needless number, “You’re Going Back to Jail” in which Blanche persuades Buck to turn himself in, aided by the singing admonitions of three of her customers at the beauty salon. It’s that kind of number that makes the show hang on too long.

Wildhorn, whose work divides musical theater lovers like no one other than Andrew Lloyd Webber, has produced one of his better scores. It’s still Broadway show tunes, but they have been skillfully funneled through ’30s jazz, rockabilly, blues, folk music, cakewalks, a bit of country-western, a good deal of church singing, even a circus-like waltz. His signature power ballads have been toned down a bit yet still contain the swirling passion of two confused young people trying to find their way in a dark world.

If the quality of Black’s lyrics are less dependable, he does deliver flashes of insight even with the appropriately simple vocabulary of the characters. For instance, a key question to audiences is how and why the couple persist with a no-win closed-end endeavor. Bonnie sings without self-pity or regret, just a poignant resignation:

Seems you get to live your life just once.
If that’s how it’s gotta be
Then I’d rather breathe in life than dusty air.
Dyin’ ain’t so bad
Not if we both go together.
Only when one’s left behind
Does it get sad
But a short and lovin’ life, that ain’t so bad

Crucial to the show’s success is whoever is playing the title characters. Slow Burn must have a guardian angel because they are blessed with Faria and Sanford who have the strong, expressive and nuanced voices you can only hope for in a singing actor. They are also, as we mentioned, gorgeous and sexy with an electrifying chemistry that requires turning on the air-conditioning in the auditorium. When Bonnie first spots Clyde, she drinks him in like a cool glass of sweet lemonade. He, in turn, basks in her adoring validation that having a dream isn’t crazy.

Sanford, who had a Carbonell nomination fresh out of school as the teenager in Zoetic Stage’s Fear Up Harsh, is captivating. She easily communicates why Bonnie is attracted to Clyde and why she stays with him. Her wide honeyed grin reflects Bonnie’s conviction that she will hit the big time someday. That same face is suffused with love during her solos on “How ‘Bout A Dance” and “Dyin’ Aint So Bad.”

Faria, who hasn’t graduated yet from FAU, is a real find. His smoldering good looks (a cross between Kevin Spacey, Russell Crowe and John Cusack) are augmented with an innate charisma and a singing voice that can rip the roof off or gently caress a love song while strumming a ukulele in a bathtub. His Clyde has a wry, wicked smile that says he sees a secret that the rest of the world doesn’t know.

Most of the other cast members are solid, especially Antolino (a twin in Slow Burn’s Side Show) as the show’s moral center, and Vandepas (Avenue Q, Parade, 9 Circles, Dying City) who does not have Clyde’s charisma, but whose loyalty and admiration is evident in the brothers’ rousing paean to the independence inherent in the American automotive culture, “When I Drive.”

Even with a carefully-watched budget, Slow Burn’s creative team delivers some its best work including Sean McClelland’s set, a ragtag collection of mold green corrugated tin sheets, evoking a dusty dying small town or a shanty village for dispossessed farmers as power lines retreat into the distance. Rick Peña’s period costumes are note perfect, Lance Blank’s lighting is fluid, and Danny Butler’s sound — often the most variable element in the high school auditorium – was flawless. Emmanuel Schvartzman’s musical direction, which brought out such glorious sounds from the cast, also led a band that mastered a wide range of genres.

The musical has an interesting history. The world premiere was at the LaJolla Playhouse in 2009. Wildhorn (who spent part of his adolescence in Hollywood, Florida) has always taken promising work back into the garage for more tuning up. He brought a new version to the Asolo Repertory Theatre in Sarasota the following year. Encouraged by the positive to mixed reactions, he took a further retooled version to Broadway in 2011. Reaction by critics and the Broadway establishment was mixed to negative, except for up-and-coming stars Laura Osnes and Jeremy Jordan. But Wildhorn has been a whipping boy there for years, partly because of his prodigious pop-oriented output. Audiences reportedly loved the show, but sales were not overwhelming and producers closed the show a month after opening night, some say prematurely.

Such a project fit right in for Slow Burn whose productions last year of Carrie, Chess and Parade took 12 Carbonell nominations this week.