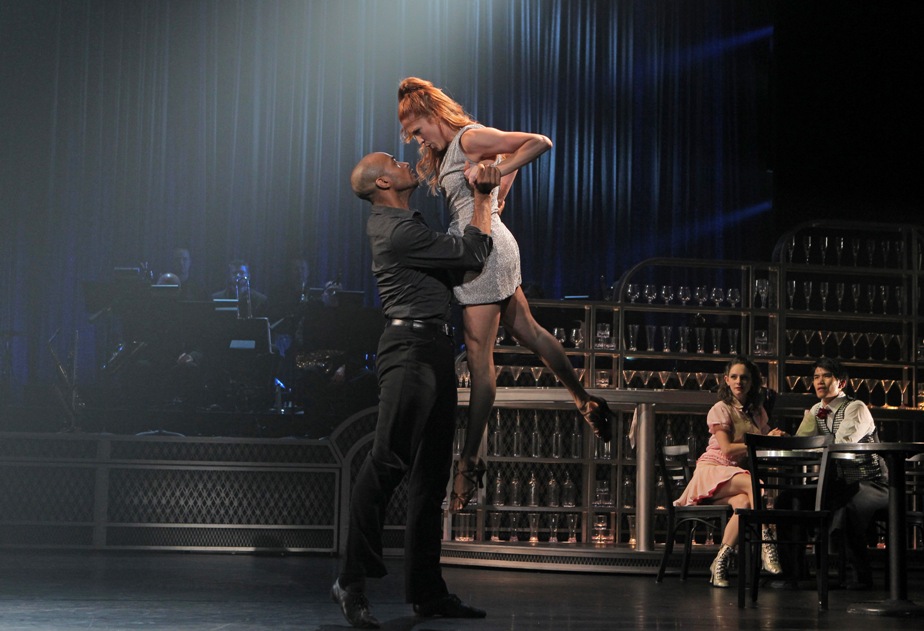 Twyla Tharp’s surrogates in Come Fly Away effortlessly swirl and slide across the stage like you think you do in your dreams – and to sound of Sinatra yet, crooning “The Way You Look Tonight.”

This 75-minute dance recital – it arguably doesn’t qualify as musical theater because there is not a shred of overarching plot – is an undeniably enchanting evening playing at the Kravis Center for the Performing Arts in West Palm Beach this week and moving to Arsht Center in Miami next week.

Obviously, Sinatra and Tharp are among the nonpareil practitioners in their fields and nothing connected to them is ever going to be second rate. Tharp is a master at fusing modern dance, ballet and the sensuality of contemporary movement. And Sinatra is, well, Sinatra.

Encouraged by her triumph turning the Billy Joel oeuvre into the surprisingly effective Movin’ Out in 2002 (and not deterred by the later Bob Dylan fiasco), Tharp has choreographed a procession of 27 numbers to the disembodied voice of the Chairman of the Board, backed up most of the time by a live big band on stage.

Unlike Movin’ Out, which did have a plot of sorts, or even Cats, which has the lamest of segues connecting the songs, Come Fly Away disposes with the idea of a narrative arc altogether. Tharp has created the terpsichorean equivalent of an anthology of short stories held together solely by the most general of themes: the ebb and flow of courtship among four couples. The stories are played out in a timeless ballroom/dance club where attractive and hard-bodied young people meet, collide, combine and separate in different couplings as Sinatra pours out tales of devotion and unrequited love.

The problem with the concept is it’s a lot of one good thing. Tharp has created a unified dance vocabulary here and as superb as it is, it’s the same moves number after number after number. After 45 minutes, you’ve seen what she can do. In fact, this intermissionless evening streamlined in Las Vegas is seven numbers shorter than the two-act edition that played Broadway two years ago.

But what moves they are: Tharp’s familiars spin like dervishes, leap into the air and slide the length of the stage on their knees. A hip pop can be a come on or a go-to-hell. Someone is always being lifted in the air and landing on a partner’s shoulder, only to be tossed around their partner’s back and then swung head first toward the ground with their legs spread wide, then caught at the last moment. If a couple isn’t entwined, they’re shoving each other to the ground. It’s breathtaking.

It goes without saying that Tharp has assembled a superb corps to execute her vision with precision and verve. Different dancers rotate through eight principal roles and several backup slots. Opening night at the Kravis, the steamy tempestuous couple were the heart-stopping Ashley Blair Fitzgerald and Anthony Burrell who nearly set the building on fire with their ferocious apache pas de deux to a hard-charging arrangement of “That’s Life” and then calmed the rapids with an ineffably lovely turn on “One for My Baby.”

But awe and envy is due the “cute” comedy couple, Ramona Kelley and the acrobatic Christopher Vo who glide in between pratfalls; the transient hook up of unlucky-in-love Matthew Stockwell Dibble and Marielys Molina, and Meredith Miles in a slinky red satin number and the studly Stephen Hanna.

The whole thing is overseen by the unseen spirit of Sinatra whose voice is pumped into the house with such crystalline clarity that you suspect he might be sitting somewhere in the shadows that cloak the 11 guys on the on stage bandstand.

That band is yet another outstanding plus. Like an impossibly perfect recreation of a 1940s crew, the team under the direction of Rob Cookman is flawless. Their pile-driving instrumental “Jumpin’ at the Woodside” is a highlight without Sinatra or the dancers. The only sour note is that occasionally canned strings are added on and it’s noticeable . In fact, sax man P.J. Perry’s matchless live solo on “Body and Soul” is blown to a full, lush and totally artificial background accompaniment while his buddies take five.

The band has some other standout soloists, notably trumpeter Mike Herriott who delivers a blistering “Let’s Face the Music and Dance” and drummer Paul Ringenbach who delivers a quirky solo on “Take Five.”

In total, Come Fly Away may not resemble theater – and we wish tour producers had brought in some real theater —  but it does what it wants to do so well that it’ll be playing in your dreams tonight while you’re imagining yourself gliding in a tux or gown.

Side note: Folks, we have a new member of the Rude and Thoughtless Audience Hall of Fame. When the band swung into the first up tempo number, “Luck Be A Lady,” Mr. Ring a Ding Ding behind us began snapping his fingers loudly and continuously. When we glared at him, he looked at us like we were some kind of uncool squares, daddy-o.