The Magnificents Is Old Fashioned Entertainment 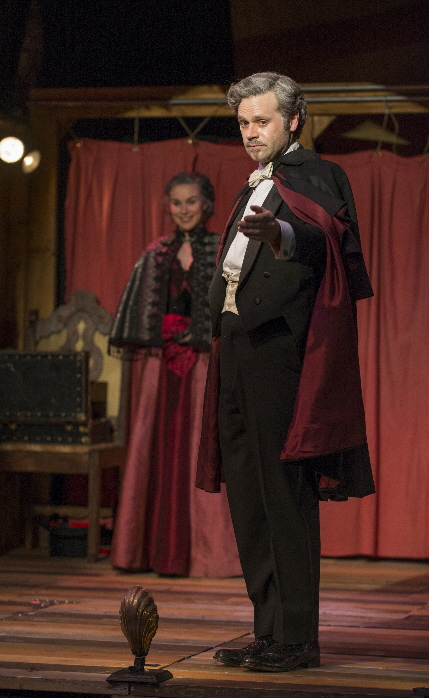 Dennis Watkins, star and playwright of The Magnificents from The House Theatre of Chicago playing at the Arsht / Photo by Michael Brosilow

A full moon hangs high above stage left, birds chirp. It feels as if you’re out in the middle of nowhere. The time? Somewhere back in time. The quiet is interrupted by Carnies, three carnival act types who hoot and holler to the audience and begin to show off their wares. You’re in the middle of a sideshow, and these are the players: There’s the strong man, the clown and the sexy aerialist.

Welcome to The Magnificents, The House Theatre of Chicago’s production that’s playing inside the intimate Carnival Studio Theater at the Adrienne Arsht Center. Seating is in an L shape and there’s little room for the stage since what takes up most of that space is a large green truck with a wooden cab on the back. Soon enough, the audience learns that the truck will become the main event as it reveals a wooden stage, complete with footlights.

As the stage slowly dropped down from the truck on opening night, there were “oohs and aahs” from the audience (applause to scenic and lighting designer Lee Keenan), but this was only the beginning of the magic that is The Magnificents.

Dennis Watkins stars as Magnificent, a magician carved from the same mold as the traveling tent show magicians of the early 1900s. A third-generation magician, Watkins is a company member of The House Theater of Chicago and has been performing for the past three years at Chicago’s Palmer House in a show called The Magic Parlour, where he performs “old-fashioned” magic, i.e. card tricks, sleight of hand tricks.

Watkins wrote the play The Magnificents inspired by his grandfather, Ed Watkins, a magician, and a magician named Harry Willard, a.k.a., Willard the Wizard, originally from Clarksville, Texas, who toured throughout the southwest United States with his tent show.

The Magnificents weaves magic tricks in with the story of an aging magician, his wife and the family he’s created with the performers in his troupe. And now, a mysterious stranger has appeared who is destined to become part of the rag-tag family.

For all of his years as a magician, Watkins obviously knows that it’s the tricks which will wow and entertain, and he’s wisely constructed his play on this premise. Most of the first half of the play spotlights Watkins and his parlor game tricks. He asks for volunteers from the audience, and makes their personal items disappear then magically reappear. He does card tricks — Magnificent says: “I can do any card trick with my hands behind my back while wearing mittens — and while he doesn’t do that, he surely impresses with a “how did he do that?” card trick. He guesses random numbers, he makes a live dove emerge from an egg, a live hare appear in a box, and he allows himself to be diced in thirds.

Then there’s the story about the Boy (Chris Mathews) who Magnificent takes under his wing after coaxing from his Spanish-speaking wife, Rosie (Brenda Arellano). Strong man, Harley (Adeoye) doesn’t trust him, aerialist Honeydew (Lucy Carapetyan) wants to get close to him, but not too close, and Chase, the clown (Michael E. Smith) is just happy to have another person join the family. Only trouble is, the Boy, who doesn’t speak, also has a few of his own secrets.

Watkins’ characters are thinly drawn; caricatures collected from another time, but it all fits creating a dream-like memory play. Adding to the idea of a dream are video sequences created by Manual Cinema Studios. A small screen drops down from the rafters intermittently and The Kid’s Dream unspools, then later Magnificent’s Dream. They are stories told through shadow puppets that look as though they’re part of the silent screen area. The projection also doubles as a device for the audience to see Watkins’ table game card tricks, a nifty piece of technical detail.

The show does have a few lagging moments — and the grand finale somehow didn’t feel as grand of a spectacle as it perhaps should have been.

Standouts in the cast are Smith as Chase, the clown, who shows everything from comic chops to a heart of gold, and Adeoye as Harley, the strong man who shows his paternal side as protector of the make-shift family.

Nathan Allen, who wrote Death and Harry Houdini, which starred Watkins and was presented in 2012 at The Arsht, directs The Magnificents. He has some challenges including the limited, although obviously self-imposed stage space, and keeping the play seamlessly jockeying between the magic tricks and the storytelling. He does so with aplomb; there’s never a missed beat.

While some may come away from The Magnificents wanting to fill in gaps about the story — the Boy (where did he come from?), Magnificent (how did he end up being a tent magician), or a number of other questions that don’t get answered, it’s much like the magic itself — the wonder of it is in its magical moments. It’s like Magnificent says, “Is it really necessary to always know the how,” and in this case, also the why?

Like Watkins’ old-fashioned magic, The Magnificents is pure and simple and classic entertainment.

The Magnificents is part of the Arsht Center’s 2014-2015 Theater Up Close Series and plays through May 3. Running time is 120 minutes with a 15-minute intermission. Tickets are $50. The Carnival Studio Theater in the Ziff Ballet Opera House at The Adrienne Arsht Center for the Performing Arts of Miami-Dade County, 1300 Biscayne Blvd, Miami. For tickets, visit. www.arshtcenter.org or (305) 949-6722.