The Report From New York : King Kong’s Beast Is Amazing; The Musical Not So Amazing

Posted on November 9, 2018 by Bill Hirschman 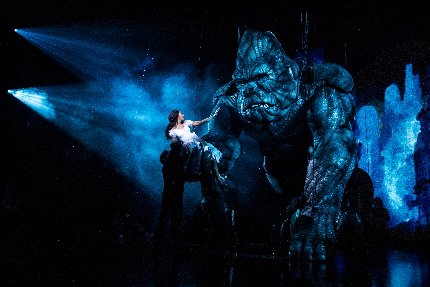 We’re back from our trip to New York to scout out productions you might want to see (or not), shows that might tour South Florida and scripts that might be worth reviving in our regional theaters.  We will post reviews over the next week or so between local productions. The reviews include American Son, Daniel’s Husband, and The Nap. Just search for “Report From New York.”

“Amazing” is a word you don’t read in too many theater reviews. So keeping in mind that it’s well-considered use here requires a lot of contextual “yets” and “buts,” King Kong is amazing, both the creature and the show.

Its flaws and shortcomings as a Broadway musical are impossible to ignore, but as spectacle and entertainment, only someone who revels in dissing whatever is popular would deny that King Kong is a jaw-dropping experience.

And while any seasoned theatergoer justifiably can punch holes in a dozen vulnerabilities (who thought this should be a musical in the first place?), a fair-minded observer should acknowledge the inventive meld of lighting, sound, technical prowess, puppetry rising to the level of choreography and pure imagination in staging challenges at the Broadway Theatre.

None of which is what you want to hear about. Kong works.

When the silverback star of this production rises from an already stage-filling knuckle-dragging crouch to an erect 20-foot-high stance, lifts his impossibly muscular arms and issues a deafening roar of anger and defiance at the puny mortals below, the audience stops breathing for a moment. Then, at the preview we saw, they answer with an equally deafening ovation.

His bared teeth, ferocious roar, feral mien and above all impossibly evocative facial expressions from anger to sorrow are an achievement that deserves acclaim.

Wisely, the creative team knew that in this world of CGI film monsters, a hyper-realistic creature (which this team has designed for theme park-like attractions) would be laughable on stage. So they created what is essentially a slightly stylized three-story-tall marionette operated by a ten-person crew in black hoodies who are visible onstage àla Warhorse. The radio-robotic facial features are operated by a three-person team hidden at the back of the theater.

But like Warhorse, the skill of these puppeteers following a carefully-rehearsed blueprint from movement director Gavin Robins, Sonny Tilders’ artistic design of the creature, and the ancient willingness of the audience to suspend disbelief produce an undeniable experience. That’s okay: Few people were fooled for long by the stop-motion magic in 1933 after about a decade later – yet it remains fascinating to this day. There is an impressive battle between Kong and a giant serpent that ought to fail miserably, but succeeds perfectly. This is not a E-ticket thrill ride, but a fine work of theatrical stagecraft and skill.

Indeed, the melding of Peter Hylenski’s sound, Peter Mumford’s lighting and astounding projections from scenic designer Peter England with Artists In Motion is state of the art, using the word “art” intentionally. They are responsible for stunningly credible sequences such as Kong racing straight at the audience through the jungle and later through Manhattan with the heroine in paw, leaving the city looking like the devastation after an Avengers / Transformers flick. And we won’t spoil how they manage to depict Kong climbing the Empire State Building. There’s a sense of the production chest-thumping, “Look at me; See what I can do.” That may be breaking the fourth wall, but you have to give credit where credit is due.

This $35 million edition is based on the 1933 film (and takes parts of the 97 other incarnations) but makes several key changes. First, Ann Darrow is the driving force behind the plot, to the point that other elements including any love interest are stripped away as needless distractions. Second, she is never a helpless victim (well, other than the first minute after her meet-and-greet with Kong). She is an ambitious and desperate starving post-Steinem chorine in the middle of the Great Depression, willing to do anything including decide in a few seconds to hop on a freighter with a bunch of men when promoter/film-maker Carl Denham appeals to her dream of being “the queen of New York.” Although a decent sort, her hunger and ambition drive her through key moments of willing and knowing betrayal that will propel her later to reprioritize her life.

A quick side note, Skull Island harbors no racist stereotypical natives jabbering gibberish, only a few nature spirits crawling through the foliage.

That said, sit back. Where to start? First, understand that this has been in the works at least six years including a 2013 production in Melbourne—Australia not Florida—from arena dinosaur creators  Global Creatures. Lead producer Carmen Pavlovic told a panel discussion at the American Theatre Critics Association conference last week that the idea of creating the ape came first, the show second. It shows.

The acting by Christiani Pitts as Ann is barely two-dimensional and Eric William Morris’ Carl is less than one-dimensional self-centered greed. It doesn’t help that bookwriter Jack Thorne (who penned the new Harry Potter show) has not given them much to work with, nor the score, other than Ann suffering a ludicrously late  realization that she has betrayed her buddy and how that brings up the questions whether her ambition has gotten the better of her and whether she will learn anything from her pal laying waste to mid-town Manhattan.

But the acting, directing and the script along with the pop songs by Eddie Perfect and an overarching score by Marius de Vries (and those legendary French rockers Justice) all are very much 21st Century—which doesn’t make the work timeless or universal or relevant. It just clashes distractingly with the time period.

It’s hard to take Ann or the peril seriously when she smarts off to Kong like rejecting an unwelcome letch in a bar with lines like (I am not making this up; I’m copying it out of the script) “You just bring me up here to show me around? Give a gal a drink, show her your apartment. Well, aren’t you the ladykiller? Not literally, I’m hoping.”

Later as she is tending to his wounds from a battle with a giant serpent, she coos, “Anyone ever tell you you’ve got sad eyes?”

Then there is the choreography given to the Depression Era denizens of New York City, the rough crew of the freighter, the spirits of the jungle and the large ensemble hired for Denham’s The Kong Show. Drew McOnie’s choreography is stunning in its design and execution—sharp-edged, swirling, with bodies interlocked in brief poses—and usually unnecessary. Over and over it exists solely because the director is the choreographer. Sometimes it helps set a tone, although it goes on and on and on. Most of the time, it does little if anything to advance the narrative. In one glaring case, it adds what seems like ten minutes to the running time when we watch chorines rehearsing a production number for Denham’s Broadway event.

Some problems are risible. In the films’ finales, either Kong puts the heroine in a safe place or she seeks shelter when the planes approach. Here she huddles under his nether region. Then the beast is shot at hundreds of times with white lasers looking like tracer bullets. Hundreds. Nothing hits her. Either the pilots are too blind to see a beautiful woman in a white evening gown in the first place or they have the worst aim since the German army in a 1940s B-movie.

The music and lyrics? Besides ubiquitous cinematic underscoring, de Vries’ work and Christopher Jahnke’s orchestrations are muscular and passionate, if not memorable for more than a minute. Perfect’s work is strictly American Idol stuff with “who am I, what do I want to be” lyrics that go on and on and on. You will be hard pressed to remember any of them other than a few catchphrases memorialized in the titles like “Dance My Way To the Light.” The script and the lyrics keep invoking the word “wonder” as in “the eighth wonder of the world” but also an oft-stated theme of the downtrodden world having lost a sense of wonder, and, by the end, Ann at least having regained it by having known Kong “for good” (whoops, wrong show).  There’s a straight line there about “wonder” that we’ll sidestep.

Again, McOnie as director hasn’t got Shakespeare to work with here or even Tyler Perry. But he does move the show along at a breakneck pace. And even if you have not seen any of the films, he and Thorne have made the story crystal clear.

Will it be enough to sell tickets? The crowd we saw it with went absolutely berserk at least eight times during the show. So word of mouth will be strong. Will it tour? In that panel discussion at the Critics Association conference, the creative team told us they have had that challenge in mind for quite some time, down to designing the creature’s weight to be sustainable on the stage of some large theaters.

Is it worth the ticket price? Honestly, never has this been so much a matter of who you are and what you go to theater to see.

King Kong is an open-ended run at The Broadway Theatre, 1681 Broadway. For more information go to https://kingkongbroadway.com/ 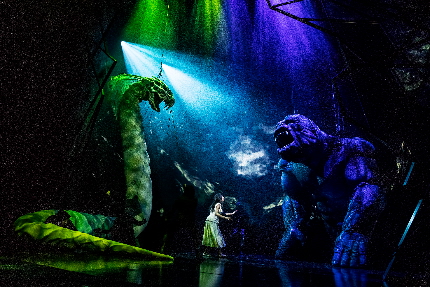 One Response to The Report From New York : King Kong’s Beast Is Amazing; The Musical Not So Amazing