Talkin’ In The Green Room With: Ken Clement

In this edition, we talk with Ken Clement (currently Senex in A Funny Thing Happened on the Way to the Forum at Broward Stage Door). Besides explaining how he avoids a wardrobe malfunction, he shares revealing insights into himself and his profession. 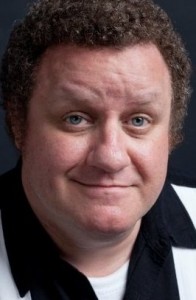 How long have you lived/worked in South Florida
I left Miami to go to California Institute of the Arts in 1987 but returned to Miami in 1997.  I lived in LA in the years after school.

What school did you graduate from/what was your major
I attended Miami Dade North from 1983 to 1987 and studied theatre with Barbara Lowery and John Pryor.  I then went on to CalArts and graduated in ’91 with my BFA in Theatre.

What show will you be happy never to see again unless it gets you a job?
The Big Bang

What do you say when someone you like is in a terrible show or does a poor job
I try to avoid saying anything bad to another actor about their work, but I also have a blind spot where my friends are concerned and tend not to see the flaws in their performances. Paul Tei has remarked that “You like everything” and to a certain degree it’s true. It’s REALLY gotta stink for me to notice.

How do you cope when there are more people on stage than in the audience
Luckily I’ve never actually had that happen.  There was one show in the first or second season of Mad Cat where there were exactly as many people in the house as on stage.  We joked in the curtain speech that each audience member got to take home an actor after the show. It was the first performance after 9/11 and the fact that even that many folks showed up is a testament of sorts to the audiences down here.

What’s the hardest/easiest part of what you do
I think dealing with the egos of others, whether intentionally or reflexively combative and competitive, make the process difficult.  It could be another actor with a different agenda than putting up the best play possible or a closed-minded director that looks upon exploration as a challenge towards their directing talents. Either way it is the one thing I hate most about this business. It makes for a crappy process and a less than fulfilling production.

Do you have any pre-show rituals
I have to touch all of my props and walk the stage and I tell the other actors “Be big, have fun.” Oh, and check my fly.

What do you do after a show
Really depends on the show.  I’m usually wide awake after a show.  I go out if I can or go home and try to relax.

What was the first show you were involved in and what did you do
My first show was back in high school. It was Kismet and I played Hajj. I remember it being fun but that was back in the 1920s. My first professional shows were Baby and Sweet Bird of Youth, back to back at the old Ruth Foreman Theatre. Both were directed by the late great Bob Bogdanov and Sweet Bird of Youth starred Ken Kay and Jan McArt. I had no idea at the time that I was surrounded by such talent; I took it for granted that it would always be like that.

When did you know this was what you wanted to do and why
I’m not sure there was a specific moment.  It just seems like I’ve always done this, and at this point I don’t think I can do anything else!

What do think has been your best work in the theater to date, and why
That’s tough. There are a few at the top. Faith Healer at Inside Out, Anna in the Tropics at New Theatre, Rabbit Hole and Seafarer at Mosaic, 1776 at Actors Playhouse and Address Unknown at Gablestage are a few. As to ‘why’ that’s tough, I liked each one for very different reasons because they were very different shows. It might either be a role I’ve wanted to play or a great cast or director or a beautiful script.

What do you think was your worst, and why didn’t it work
Also tough to answer. I can’t think of a “WORST” so I’ll give you a “BAD”.  I recently played Oscar in The Odd Couple and while I was having a really great time doing the show, it was not as specific as it should have been, if that makes any sense. The process was a bit rough and rushed and we didn’t have the detail that the play requires. That being said, I did thoroughly enjoy the part and look forward to doing it again better someday.

What was your best experience working in theater
This is tough to answer because I’ve had so many great experiences.  I’ll give you a good one. A few years ago at Gablestage, Avi Hoffman and I did Address Unknown by Kressman Taylor. It was in the slot where we did daytime shows and students from the Dade County Public Schools were bussed in to see it. I knew it was a good play and it was really great to work with Avi and Joe Adler on this one and I knew that Joe’s regular audiences would like it, but I didn’t have any idea how well it would be received by the students. At the talk-backs after each show you could see how the kids were so completely moved. Not just by the story of the destruction of these two close friends but by the education of just how personal and horrible the Holocaust was. For many of them it was their first exposure to this truly horrific event. I remember one young girl in tears after the show asking how people could do this to one another.  The process and the production will always be with me, and Avi’s stories of his personal loss will forever be a part of what the Holocaust means to me.

What was your worst

I’ll try to do this without naming names.  I was asked by a Director to play the lead in a great musical. It was a bit of an issue because I was already slated to do another show in that slot at another theatre. The Director, however really wanted me so he and the folks at the other Theatre had a long talk and the show I was scheduled to do was canceled. I had been learning the score for a month or so when out of the blue the Director called me and told me that he had changed his mind and I would not be playing the lead. At this point I had already turned down good work at several other theatres. The Director offered me another part in the show with a couple of scenes and a dozen lines or so. I accepted the work because I had to pay my bills. I became consumed with doubts about myself and my career. I felt worthless and furious. I started drinking professionally and was filled with a self-loathing that was only matched by my anger toward the Director. The cast, however, was wonderful. They went out of their way to make the entire experience tolerable. Today I have a civil relationship with the Director but he hasn’t offered me work again in the years since this incident. I still respect him and the work he has done but I’m not sure if I’ll ever trust him again.

What one role/show would like to do over or just do again
Definitely Ben Franklin in 1776.

What was the worst on-stage mishap you dealt with
Other than the occasional missed entrance or flubbed line I had a stray dog wander onstage in summer stock during Comedy of Errors. Told it “Out, out damn spot.” And it left.  Brought the house down.

What’s your day job
A couple days a week I answer the phones at the New World Symphony on Miami Beach. It’s really a great group of people over there.

What’s the weirdest/worst non-theater job you ever had
I was a Production Assistant for a season on the new Land of the Lost TV show (back in the ‘90s).  It was quite bad. We shot the location stuff in a park in Glendale, CA. Most of my job was standing on a path in the woods keeping hikers away from the set. I think that’s when I got really good at smoking.

Do you have unexpected special talents and skills
I’ve learned some weird things for shows. I can shuffle a deck of cards from one hand to the other, I can spin a revolver as well as any movie cowboy, I can play the penny whistle, I can twirl a lasso, I can roll a cigar, I can juggle, I can crack a twelve foot bull whip, I can load and shoot a Tommy Gun, I can ride a horse, I can recite the books of the Bible and I know a few Welsh, French, and German phrases that might either get me in a fight or get me laid.

What would you do if you couldn’t be in theater
I’d be a chef.  Its one of the only other things I can do well and enjoy doing.

What’s your most unforgettable theater experience
The same day I opened as Burly Bear the Baking Bear in ‘Jack and Jill’s Enchanted Caverns’ in the morning I opened as MacDuff in the Scottish Play that evening. Guess which one was paying the bills!  It has always been a reminder to me about the importance of strong work ethic and enjoying performance.

What TV programs do you DVR when you’re working a show
Don’t know how to work the damn thing.  I also wait for the end of a season of a program I like and then watch it all over a couple of days.  If I had been one of those folks waiting week to week to find out what happened next on Lost I would have killed someone.

Whose music can you not live without
Toss up between Nat King Cole and Sinatra.

Why doesn’t South Florida theater have a higher profile nationally
It doesn’t have a centralized Theatre District. There is great theatre and a good deal of it, but it’s spread out over three counties.

Finally, add a question you wish I had asked
What advice would you give to a young actor just starting out?:  Embrace rejection as an opportunity to better yourself. ‘Not getting the part’ will be a more familiar acquaintance than ‘getting it’ so find a constructive way to deal with it. Make friends with the costumer, it will make for a more comfortable show if your pants fit. Don’t be a whore but do know your price. Never be afraid to get the conversation of money out of the way before the process begins. And lastly, never be afraid of saying no.

This entry was posted in Features and tagged A Funny Thing Happened on the Way to the Forum, Ken Clement. Bookmark the permalink.

2 Responses to Talkin’ In The Green Room With: Ken Clement