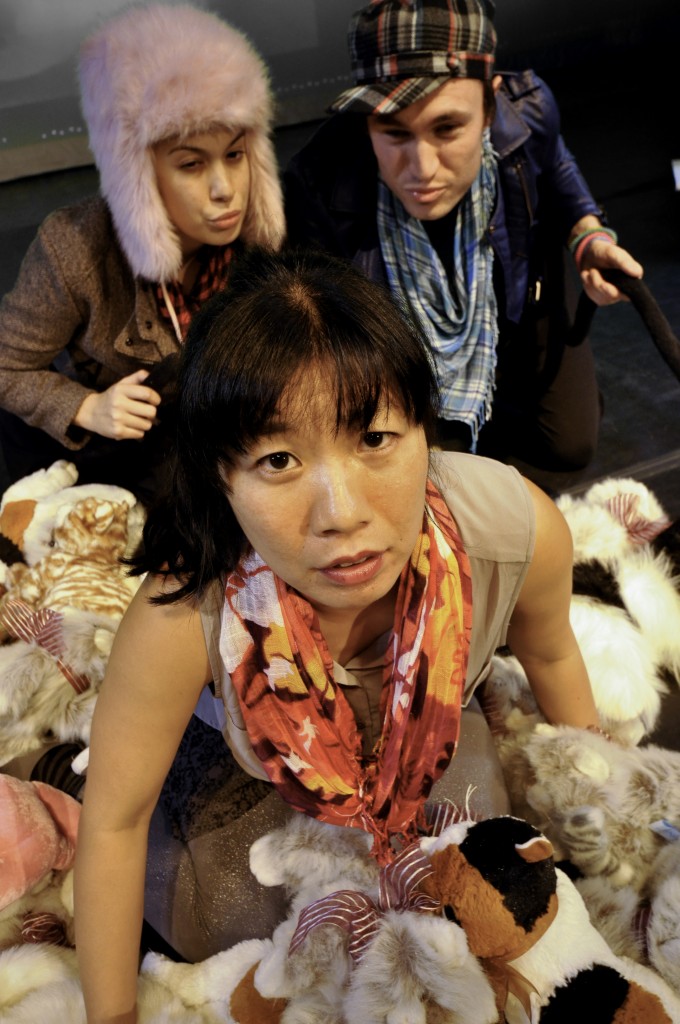 Expectations aren’t particularly high for a stream of consciousness play that seeks meaning to life in the correlation of sleazy pickup artists and a solo performance actress with a cat who persistently pees on her. Sounds just a bit SoHo SoBe precious and pretentious.

So the delightful surprise is that Kristina Wong’s Cat Lady at Mad Cat Theatre Company is downright hilarious while shot through with pathos and insights into the search for human connection. It seems to be exactly the offbeat but accessible exploration of loneliness that Wong and director Paul Tei hoped to create.

While a shade too wacky and ribald for some conventional tastes, the 13th season opener for Mad Cat is both rollicking and thought-provoking as Wong examines the disconnect from real interaction that she shares as a performer on tour and the analog with men who cruise bars seeking sex and money– both lost in adopting roles that fail to fill an emotional void.

As actress and playwright, Wong guides a fictionalized account of her recovery from an abusive relationship and her reliance on her cat Oliver as her one solace at home between solo shows on the road. At the same time, after meeting a professional pickup artist on South Beach, she begins researching the strange subculture of men who hope to find validation in these assignations.

Drilled in techniques in seminars, these men go beyond objectifying women to objectifying relationships (they refer to women as “targets”). They reduce human interaction to formulas and scripts as codified as a corporate handbook, complete with argot and abbreviations such as AFC for Average Frustrated Chump.

While savagely lampooning these faux macho men, Wong the playwright and social observer delves beneath the poses to expose an isolation that she shares as someone who also performs a character instead of risking herself.

The Kristina Wong she creates for this production is terrific company: terribly funny with an offbeat sensibility and an endearing smile that wins over an audience instantly. But she is also bravely open about the angst consuming her life without seeming to be burdening you with her troubles because she seems as bemused by her hapless state as we are.

She’s also a skilled actress. In one superb passage, she takes the cynical manipulations taught in an instructional video we’ve just seen and delivers them in a startlingly effective seduction of the audience. We know it’s manufactured because Wong is simply employing what the instructor said, but Wong’s skill makes exactly the feigned connection that the hustler was describing. This meta-moment in which the audience becomes the target is vital and unnerving.

She and Tei luxuriate in those meta aspects. Actors playing partners from past abusive affairs warn her not to get revenge by putting them in one of her shows – a good belly laugh since that is exactly what is happening. At one point, Wong “forgets” a line, forcing a fellow actor to whip out a script and prompt her.

Wong is a Los Angeles-based solo artist who has combined satirical theater and standup comedy in a series of plays, notably Wong Flew Over The Cuckoo’s Nest about depression and suicide among Asian-American women and Going Green The Wong Way, which Tei and Mad Cat presented in 2010.

But while she remains the fulcrum here, Cat Lady is more of an ensemble piece with Jessica Farr and Noah Levine playing cartoonish crotch-grabbing pickup artists honing their craft.

Nearly stealing the show is Ken Clement as a droll Oliver who could give Garfield lessons in exuding that not quite inscrutable self-satisfaction.  Once again, he demonstrates a preternatural talent for being a low-comedy clown one moment and the next, able to surprise you with unleashed emotion. Here, he is sublimely silly in his suave black tuxedo topped by a full cat cowl with perky ears and carrying a spray bottle that he uses at the slightest provocation. He swaggers through a scene in which Oliver drills the pickup artists on their technique. His mobile face can host the innocent expression of a kid who just batted a ball through the neighbor’s window. But he erupts with bracing rage when Oliver resentfully rebels at being taken advantage of as the source of unconditional love in Wong’s life. “You will remember me as more than just ambience,” he demands.

The journey is enhanced by videos including real-life guru Johnny Wolf instructing wannabes at an actual if meagerly attended World Pick Up Artists Summit.  Incidentally, there seems to be no unified style for “pickup artist” or “pick up artist” or “pick-up artist,” but apparently the players avoid facing their crassness by stubbornly referring to their profession by the abbreviation PUA.

Tei, who has known Wong since he moved to L.A. in 2009, is a perfect fit as a director.  He has caught her vibe of daffiness that clothes genuine feeling and augmented her script with his stylized staging. In fact, having a previously-produced script rather than developing most of it in rehearsal has imposed a bit of welcome discipline on Tei’s genius for unbridled inventiveness. Even more crucial, he effectively turns the tone of the show on the proverbial dime from hilarity to pathos as required.

He and technical director Joe Kimble have created an “installation” like you’d find at Art Basel rather than a traditional theater set. It features a stairway that goes nowhere, huge sheets of translucent material that Tei called condoms and oversized props like a huge ball of purple yarn for Oliver to chase. Lighting Designer Melissa Santiago Keenan works overtime to create a dozen different locales and moods in a play that that switches gears every minute or so. Matt Corey deftly adds to the environment with his soundscape. Farr “choreographed” intentionally silly dance breaks including Wong’s vision of performance art in which the actors gyrate inside tubes of stretchable material.

As often happens with Mad Cat productions, some elements, images and passages either (a) don’t quite work, or (b) their significance escapes audience members. While the show comes to a climax, it’s not completely clear what Wong’s ultimate epiphany is, if there is one.

And even at 80 minutes, portions could be excised without harming the driving through line. Prominent among them is a scene in which two psychics read Oliver’s mind and communicate his concerns to Wong over the telephone while she is on the road: cute, even thematically relevant, but protracted and ultimately unnecessary that late in the show.

That said, Cat Lady is one of the most satisfying Mad Cat productions in recent years and a deserves an audience seeking something that makes you think and laugh while tearing down the strictures of traditional theater.

To read an interview with Wong and Tei, click here.