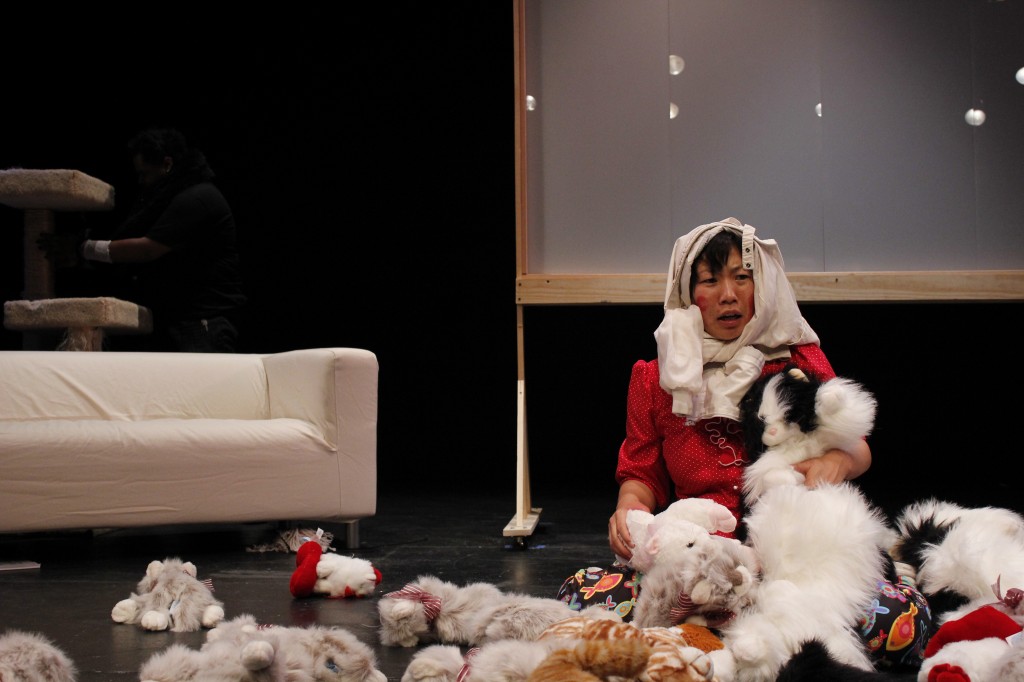 What other Florida troupe besides Mad Cat Theatre Company would take a talking cat, who persistently pees on the rug, and a professional pickup artist instructing wannabees how to pretend to be genuine – and meld them into a unified statement about fighting loneliness during the protagonist’s existential crisis?

But synthesizing the seemingly disparate elements in Kristina Wong’s Cat Lady fits the aesthetic of the company led by Paul Tei and Ann Kelly who are opening Mad Cat’s 13th season this week at the Miami Light Project.

“It’s really this intense story about what we all look for: human connection and trying to find meaning in our lives,” said Wong, who drew on parallels between her life as a solo theater artist and the lifestyle of pickup artists she first met in Miami – and tossed in her late cat Oliver to boot.

Artistic Director Tei, who is directing the show, added, “I think it’s about how these worlds collide.”

Which, in fact, is how the play came about: The Los Angeles-based actress was working through relationship issues and the isolation of touring while performing at the South Beach Comedy Festival in 2008 when she allowed herself to hook up with a pickup artist.

She became fascinated by him and, in subsequent research, his lifestyle and colleagues around the country. “It went beyond what the feminists think about. I had a lot in common with them: I went to bars and performed versions of myself every night and they perform versions of themselves.”

She said the resonances flew as she spoke with the men who pretend to be someone else and, like her, sometimes lose track of the feigned persona and the real one.  “What was I when I wasn’t performing? I asked them when you’re finished playing a game playing somebody else, do you know what reality is; what do you do with reality?”

She acknowledges, “It’s a subculture that is horrifying to a lot of people, but I’ve spent time talking to these men. They are not all rapists. They are intensely lonely guys who never fit in, who are really there to developing a role to perform in the rest of the world.”

It especially echoed for Wong, coming off a series of unsuccessful and, in one case, a verbally abusive relationship that left her wondering if she was turning into a stereotypical “cat lady” whose major relationship was with a pet. She felt a kinship of loneliness among these men, some of whom had girlfriends.

She began research that included visiting the 2009 World Pickup Artist Summit. Twenty-two drafts later, she had a four-character 75-minute piece that was work-shopped in Los Angeles and produced in Houston and her native San Francisco. Unlike her other pieces that barely used other actors, here she has written multiple roles to be inhabited in Miami by character actor Ken Clement playing Oliver, plus pickup artists played by Noah Levine and Jessica Farr, the co-author with Tei of Mad Cat’s The Hamlet Dog and Pony Show last season.

Wong and Tei describe the production as a very fluid, stylistic evening. “It turns a lot of corners very quickly. It doesn’t sit on one note very long,” she said.

That fits Tei’s vision perfectly including a liberal use of sounds, light, video and dance to enhance the narrative. “It’s very cinematic. It’s like stepping into the mind of Kris Wong. Things flow in and out like ideas that pass in and through,” he explained.  “This play jumps from the present to the past and melds moments that are reality and theatricality… like a person’s brain patterns.” To that end, Tei and Joe Kimble have created a set design that he says is more of “an installation,” more of an environment than a traditional setting. 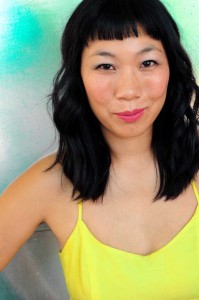 Cat Lady is the sixth major piece from the third-generation Chinese-American whose Wong Flew Over the Cuckoo’s Nest looked at the high rates of depression and suicide among Asian American women and toured to 40 cities.

Going Green the Wong Way, her tale of trying to live an environmentally conscious life in fossil fuel Los Angeles, was mounted by Mad Cat in 2010 thanks to Tei who has been buddies with her almost since he landed in Los Angeles in 2009. She specializes in off-beat dramatic approaches, but each work excavates the marrow of her own trials to create fictionalized pieces.  Witty, profane, cutting and moving, Wong acknowledges her theatrical style is “not your mother’s comedy.”

After Cat Lady, Wong hopes to evolve into the next phase of her professional life. “I don’t think there’s anything left in my life to mine,” she said. There’s also a wear and tear of performing the same shows over and over. “It just doesn’t suit my brain.”

So while she still has commitments to tour some of her shows, she wants to travel abroad to study social issues like global poverty. But even that would be grist for the mill — research for a show she has penciled in as The Wong Street Journal, which can evolve and mutate steadily during a tour as world events change.

Tei, too, has plans. He is still living in Los Angeles pursuing a film and television career, shuttling back to South Florida to work on Mad Cat projects.  He’s working with Jessica Farr on an early version of a play for the South Beach Comedy Festival in April about fashionista Isabella Blow, possibly starring Mad Cat company member Erin Joy Schmidt, and then expanding it for a full Mad Cat production in the summer.

Tei is also rewriting RPM whose truncated version at last March’s Miami Made Festival was, in his words, “disastrous.”  The new version under construction under the title DJ has sparked interest from the Ojai Playwrights Festival.

For now, though, both are focused on a compressed prep time for the current show. And while it’s frightening to expose your inner demons nightly before strangers, Wong is jazzed by it at the same time.

”I love it when people put it all on the line.”